A recent open season for short-term natural gas capacity on the Alliance Pipeline was “nearly three times oversubscribed,” and the system is now fully contracted for 2022, according to Pembina Pipeline Corp. 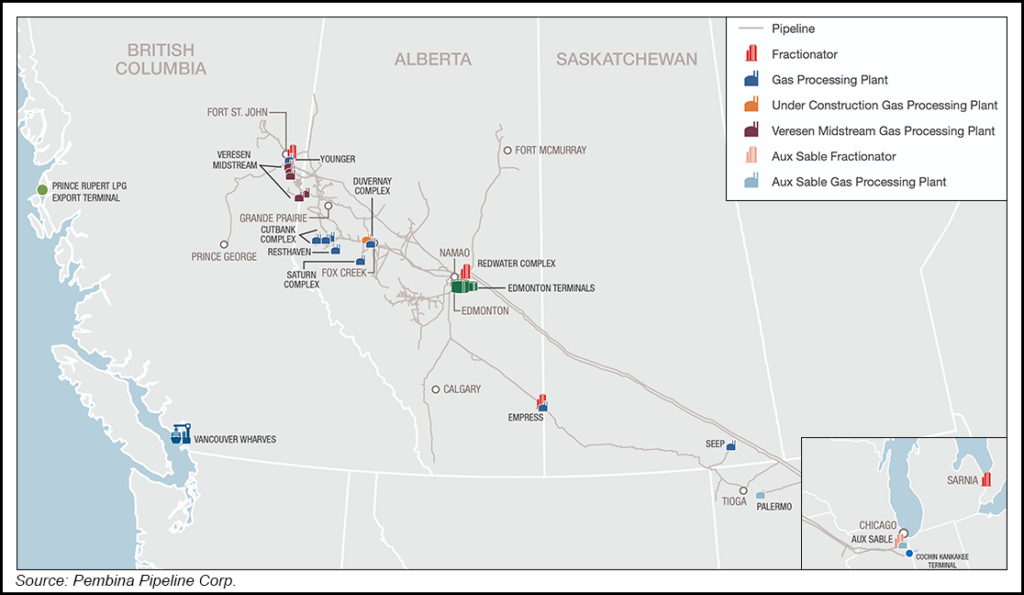 Alliance over the long term “offers reliable and highly competitive access to the midwestern U.S. gas markets, as well as a conduit to the Gulf Coast” and the liquefied natural gas (LNG) export market.

“The current outlook also supports contracting of capacity beyond 2022 and we look forward to providing further updates by the end of the year,” Dilger said.

The 2,391-mile Alliance system moves gas from the Western Canadian Sedimentary Basin (WCSB) and the Willis​ton Basin to the Chicago market hub. The United States portion of the system consists of 967 miles of infrastructure including the 80-mile Tioga Lateral in North Dakota. The system, in commercial service since December 2000, delivers an average of 1.6 Bcf/d.

Why Is Alliance Gas Headed To Gulf Coast?

A “bunch of this gas is making its way to the Gulf Coast,” Dilger said of the Alliance system, as there is “a better part of 10 Bcf/d of new export capacity” under development.

Supply from the Cedar LNG project in British Columbia, of which Pembina is a partner, would be headed to Asia, Dilger noted. That puts any Alliance supply that makes its way to Gulf Coast export markets in the LNG sweet spot.

“We think there’s going to be a continued desire for shippers on Alliance to get to the Gulf Coast,” Dilger said. “There’s also a very robust activity for longer-term contracts interest underway, and I’m quite certain some of that has to do with Gulf Coast exports.”

Several “fundamental developments” within Pembina’s business and across the energy sector “make us increasingly optimistic about the prospects for Pembina and, by extension, each of our stakeholders,” the CEO said.
For example, “underinvestment and capital discipline” by exploration and production (E&P) customers is driving natural gas and natural gas liquids (NGL) prices to seven-year highs, while inventories are below average levels heading into the winter season.

“Since the onset of the pandemic, producers have maintained discipline with a focus on productivity improvements, debt reduction, cash generation and returning capital to shareholders,” Dilger said. “We remain of the view that the robust commodity pricing environment, driven by the post-pandemic economic outlook, rising energy demand with a tight supply curve sets the stage for supply growth into 2022 and beyond.”

E&Ps are expected to continue to be disciplined on spending, but “we also recognize that increasing energy prices may eventually necessitate a supply response to meet the world’s near-term energy needs,” Dilger said. “This would clearly have positive implications for Pembina.”

The recent announcement by Dow Inc. to build an ethane cracker in Fort Saskatchewan is encouraging too, he said. The project would increase ethane demand in Alberta, “as we estimate over 100,000 b/d of new ethane feedstock supply could be required. This should have positive implications for third-party service providers, as new infrastructure will be required for ethane extraction and transportation.”

Enbridge Inc.’s Line 3 replacement project completion also was “a major milestone for the industry,” which”meaningfully advances Western Canadian oil egress,” Dilger said. “In conjunction with the Trans Mountain Pipeline expansion currently under construction, we expect the WCSB will soon have up to 750,000 b/d of excess takeaway capacity, providing ample opportunity for supply to grow meaningfully to fill the gap, with the potential for related benefits to accrue to Pembina over the long term.”

During 3Q2021, Pembina benefited from assets placed into service over the past year, including the Prince Rupert Terminal, Empress NGL infrastructure, and the Duvernay and Hythe gas plants, CFO Scott Burrows told investors.

Planning work continues on a proposed expansion for an NGL export terminal on the northern Pacific coast of British Columbia at Prince Rupert. A final investment decision is expected in early 2022.

Filling the projected new open liquids pipeline capacity would increase Canadian production by 16% to about 5.5 million b/d, with the total dominated by more than 3 million b/d from the northern Alberta oilsands.