Seismologists say the largest earthquake in Oklahoma state history, which struck Pawnee County earlier this month, occurred along a known fault line. But a series of aftershocks along a different line that intersects with the quake’s epicenter indicates that a new fault has opened up. 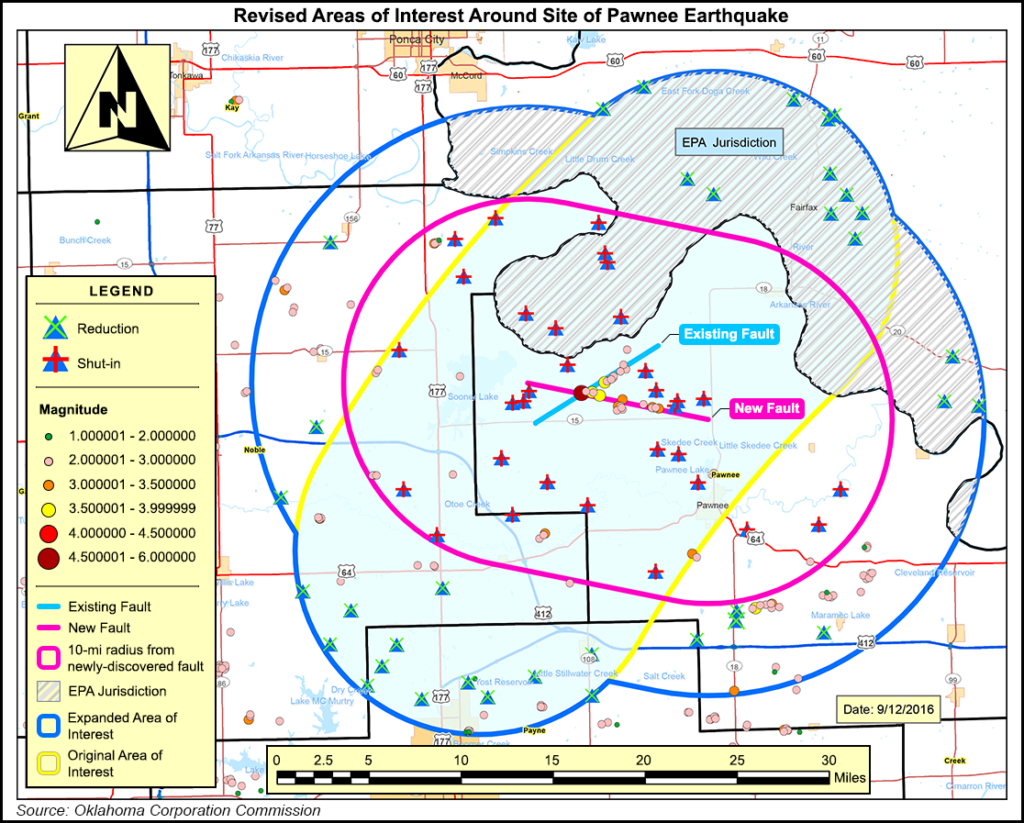 Meanwhile, state and federal regulators said some of the wastewater disposal wells directed to cease operations immediately following the Sept. 3 earthquake near Pawnee can resume activities, but at a reduced rate.

Oklahoma Geological Survey (OGS) Director Jeremy Boak told NGI’s Shale Daily that the Pawnee quake, which measured 5.8 on the Richter scale, occurred along the fringe of an “area of interest” being staked out by the Oklahoma Corporation Commission (OCC) and its Oil and Gas Conservation Division (OGCD).

“The broad interpretation is that this is a consequence of regional injection patterns, creating pressure pulses,” Boak said Tuesday. “We don’t much about how fast they move out.”

Although it is too early to tell if the Pawnee temblor was triggered by injection well activity or was a natural occurrence, Boak warned that a more ominous sign is the fact that neighboring Osage County is located far from any major injection wells. Osage County is also not injecting large amounts of wastewater and has recorded few earthquakes, he said.

“This pressure pulse appears in some ways to have found a fault that was particularly ready to pop with a lot of energy,” Boak said. “We do need to keep an eye on other parts of this periphery that may not yet have been contacted by the pressure pulse that is probably expanding outward…

“I’m hesitant to say so early that any one earthquake is injection derived or natural. It was a big earthquake. The obvious action you take is to behave as if it were injection induced, and take some action on reducing injection in the area.”

Boak said another concern is that OGS has not recorded any aftershocks from the Pawnee quake with a magnitude of 4.0 or higher. “We’ll be watching it pretty carefully,” he said.

Citing the new fault data, OGCD on Monday said it was expanding its area of interest around the site of the Pawnee quake to 1,116 square miles. The expanded zone now includes 67 disposal wells targeting the Arbuckle formation, 48 of which are under OCC jurisdiction and the remaining 19 are under EPA primacy. OGCD said it has directed 27 of the 48 wells within its purview to cease operations, leading to a reduction of 40,000 b/d of injected wastewater.

The remaining 21 wells will be allowed to resume operations, but are being directed to reduce their intake volumes by 25% from their last 30-day intake volume average.

OCC spokesman Matt Skinner told NGI’s Shale Daily that state regulators are trying to protect the new fault. According to an OGS map, the previously known fault runs in a southwest-to-northeast line, while the newly discovered fault runs in a west-to-east/southeast direction.

“The threat from the southern wells has diminished and so they’ll be allowed to come back on,” Skinner said Tuesday. “However, obviously out of caution it will be at a reduced volume. There are wells to the east and west that will have to shut in that were untouched by the original [directive].”

EPA’s Region 6, which is based in Dallas, added that one well was confirmed to be outside the area of concern and could resume normal operations. The remaining five wells were requested to remain shut-in.

Boak indicated that the seismic activity near Osage County may have taken EPA by surprise.

“They’re kind of where the OCC was quite a few years ago,” Boak said. “They were getting annual data, and they’re scrambling to try and begin to put it into a better framework. What they’ve done so far, in essence, is to mirror the actions of OCC — to take their boundaries and say ‘OK, we are going to shut in these wells.'”

Still, the number of seismic events in Oklahoma is on the decline. “This will be the year in which the largest quantity of seismic energy is released in Oklahoma, but the earthquake rate is distinctly in decline — it’s going down by about one-third,” Boak said. “That’s partly highlighting a pattern I’m beginning to deduce: that our largest earthquakes are occurring on fairly well-defined fault structures, even if it’s the earthquakes that define the faults.”

Since the beginning of the year, OCC has ordered operators of wastewater injection wells targeting the Arbuckle Formation to cease or curtail their operations.