Amongst milder weather and the comfortable lethargy of August trading, the forward market as measured by NGI‘s Forward Lookmoved up just less than three cents on average since the close of trading on Aug. 21. For traders at many index locations, the price of September gas seems to have already been worked out with the start of the month less than a week away. However, there is one exception. 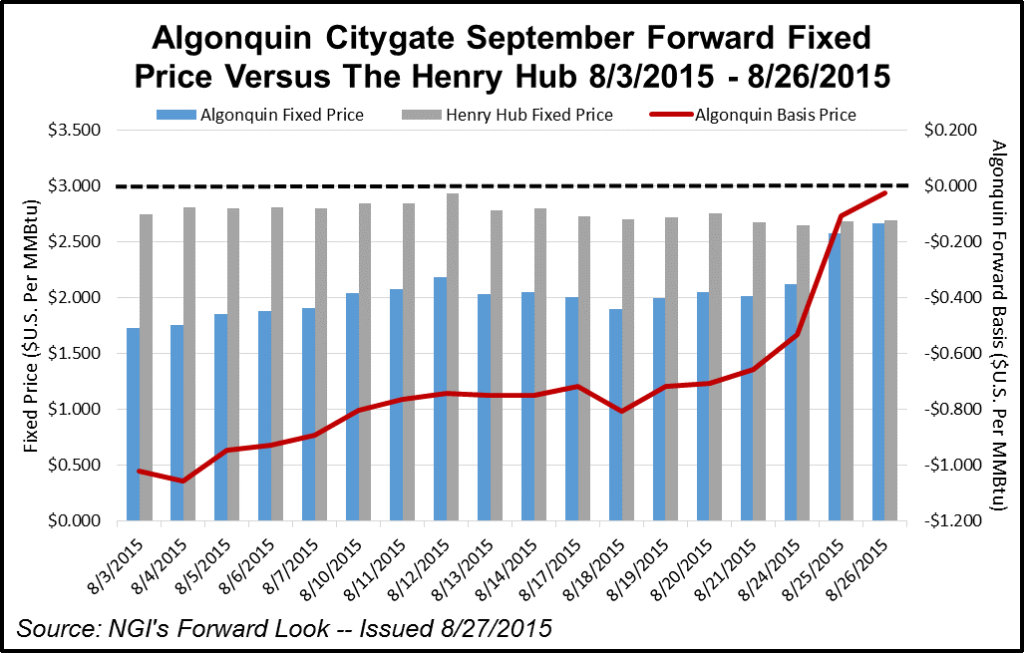 The Algonquin Citygate September forward fixed price has taken off like a rocket since Aug. 21, with the point gaining 65.2 cents by the end of the Aug. 26 session. The move comes on top of little activity in the underlying Henry Hub futures price, which gained only 1.7 cents over the same period.

“This move was entirely on the basis side of things,” said NGI markets analyst Nathan Harrison. “Traders at Algonquin seem to be banking on an earlier wave of cooler fall weather in September, and have waited on the sidelines for a majority of August before pricing it in.”

Indeed, Algonquin Citygate fixed prices were rather flat for one of the more characteristically volatile points in the Northeast. “Since the beginning of August it has experienced only modest gains — rising only about 30 cents from August 3 through August 21,” Harrison added. “It seems, however, that around the end of last week the fuse was lit and the point took off.”

The move at Algonquin seems to be isolated to that point specifically given other points in the region have not registered such large advances and some have even recorded declines since last Friday. The fixed price for September from Friday through Wednesday at Transco Zone 6 NY has fallen 2.4 cents while at Texas Eastern M-3, declines came in at approximately 8 cents.

The recent bullish activity at Algonquin appears to be an anomaly in the current natural gas market, as most fundamentals remain considerably bearish. Yes, the Atlantic hurricane season has recently begun to spin up over the last week with Hurricane Danny and Tropical Storm Erika forming one after the other (see Daily GPI, Aug. 27; Aug. 21), but production from the Gulf of Mexico has yet to be impacted, and even if it was, onshore supplies are expected to easily offset any losses.

Taking a closer look at the natural gas inventory situation, earlier estimates of bin-busting storage over 4 Tcf at the end of injection season have now been moderated closer to 3.9 Tcf, but injections going forward still look to be robust. While most industry estimates going into Thursday’s report for the week ending Aug. 21 were for a build between 59 Bcf and 61 Bcf, the Energy Information Administration reported an injection of 69 Bcf and the expiring September futures contract traded as low as $2.629 after the number was released. Storage now stands at 3,099 Bcf.

“Today’s higher-than-anticipated report caught the market off guard and sent prices lower following its release,” said Teri Viswanath, director of natural gas strategy at BNP Paribas. “At the close, the expiring September ”15 contract settled at $2.638/MMBtu or a loss of $0.055 on the day.

“We expect that domestic production will begin to increase once again in October, when heating demand will mask some of the supply gains. In fact, without strong heating demand, inventories might continue to build into the start of the heating season. Thereafter, we expect relatively light seasonal withdrawals, with end of storage approaching 1.8 Tcf by end March. Consequently, with inventories likely to remain high through the upcoming winter, the opportunities for an extended seasonal rally appear to be limited.”