Algonquin Gas Transmission LLC told FERC that it erred when it tried to extract a broken drill stem from under the Hudson River last month during work on the Algonquin Incremental Market (AIM) Project. The company pledged to comply with all of the agency’s future directives for the project. 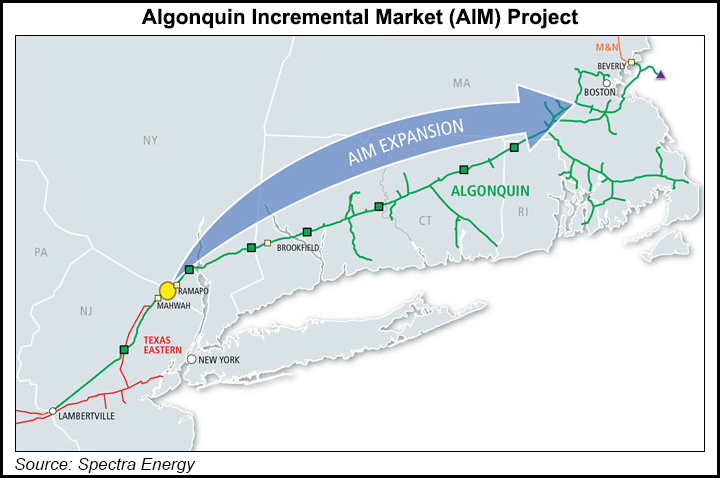 But the company, a unit of Spectra Energy Partners LP, added that both it and its contractor “acted with due diligence and in good faith” to keep wetland disturbance to a minimum, and presented evidence that it kept federal and state regulators informed as the Aug. 27 incident unfolded.

In a letter filed Friday with the Federal Energy Regulatory Commission [CP14-96], Algonquin said it was informed by its contractor that the drill stem disconnected from the pipe during horizontal directional drilling (HDD) pullback activities, and that the contractor needed to move quickly to find the break and repair it or begin the extraction process. Construction personnel then discovered that the drill stem became separated from the pullback string.

Although a FERC compliance monitor — to whom the company had “described the urgency of the situation” — was on site when the incident occurred, Algonquin acknowledged that it mistakenly began extraction activities along the west side of the river without additional authorization.

“At the time, Algonquin anticipated that it had sufficiently communicated its plan [with the onsite monitor],” the company said, adding that it expected the monitor to return the next day. “…Due to the exigent circumstances of this situation, Algonquin personnel made the incorrect assumption that work could be initiated prior to obtaining written authorization.

“In retrospect, Algonquin made an incorrect decision and should have waited until written approvals were received prior to performing the work.”

The company said its contractor encroached upon 381 square feet of wetlands when it unsuccessfully tried to extract the broken drill stem on Aug. 28. The contractor anticipates making a second attempt to retrieve it within three to four weeks. Algonquin pledged to restore all of the areas it disturbed in accordance with its permit requirements, adding that the wetland subsoil and topsoil that was excavated has been segregated and stored at an adjacent site.

Algonquin’s letter was in response to a separate correspondence from FERC dated Sept. 9. The agency blasted Algonquin for a “serious violation” of environmental conditions and said the company “demonstrated a lack of consultation” by moving ahead with the extraction attempt without first obtaining a variance.

“Our compliance monitor directed Algonquin that additional information was required prior to approval of this anticipated variance regarding the disturbance of a forested wetland located outside of the authorized construction workspace,” wrote Ann Miles, director of FERC’s Office of Energy Projects. “However, Algonquin went forward with the excavation of the wetland, after the compliance monitor had left the site, without requesting Commission approval or attempting to receive any other agency approvals until after the excavation was complete…

“To date, we have not found it necessary to issue a ‘stop work’ order for the construction; however, we cannot continue to see this type of noncompliance.”

But in a sign that Algonquin disputes FERC’s assertion that it did not keep regulators informed of its actions, the company included copies of emails that it sent to the New York State Department of Environmental Conservation (DEC) and the U.S. Army Corps of Engineers (USACE).

An official with the DEC acknowledged receiving Algonquin’s notifications of the incident. He said that once the HDD process was complete, the company must restore the wetlands and submit a final report documenting the restoration activities to the DEC. Meanwhile, a USACE official separately thanked Algonquin for the information on the excavation work, adding “at this time, no additional information or action is required.”

Still, Algonquin struck a conciliatory chord with FERC. It said it has reevaluated its communication protocols, both in-house and with the regulator.

“Algonquin has reinforced the gravity of this situation with internal staff working on the AIM Project,” the company said. “If such a situation presents itself again on the AIM Project, Algonquin personnel have been informed that they may not proceed with any work that is not authorized by the Commission, the landowner, and applicable permitting agencies until such time as Algonquin has obtained appropriate written authorization to do so.”

It was unclear how long the incident would delay the AIM Project from entering service; the original target date was the second half of 2016 (see Shale Daily, March 29).

“Algonquin welcomes FERC’s continuous oversight and guidance, as well as its ongoing inspections, during construction of the AIM Project,” Spectra spokeswoman Marylee Hanley told NGI on Tuesday. “We take very seriously FERC’s letter regarding the violation for work associated with the [incident]…and have reviewed the actions outlined in the letter. We have cooperated with FERC and have provided the information requested.”

FERC gave authorization for Algonquin to begin construction of the 342,000 Dth/d pipeline in March 2015 (see Daily GPI, March 4, 2015). The AIM Project will transport natural gas produced in the Marcellus and Utica shales from Ramapo, NY, to citygates in Connecticut, Rhode Island and Massachusetts.