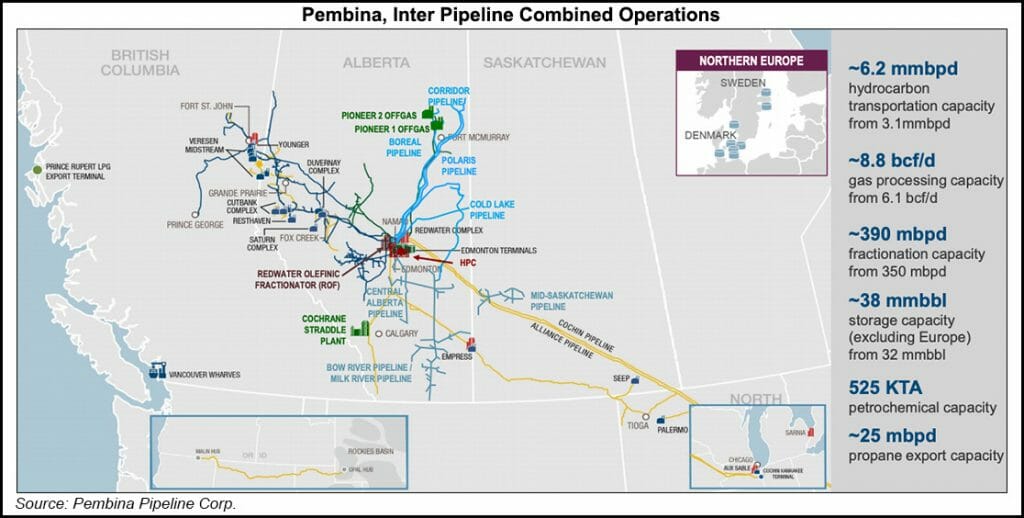 Pembina also will acquire an Inter Pipeline plant under construction near the Alberta capital of Edmonton for C$3.9 billion ($3.1 billion), to make 525,000 metric tons/year of polypropylene from 22,000 b/d of propane. An Alberta government subsidy for projects that use gas and its byproducts covers C$408 million ($326 million) of the cost.

Pembina and Inter Pipeline predicted the merger, scheduled to close by the end of this year, “will create one of the largest energy infrastructure companies in Canada.”

The transaction knits together “a diversified and integrated asset base that can support and grow an extensive value chain for natural gas, natural gas liquids and crude oil, from wellhead to end user,” said the two companies.

The pair said they have identified more than C$6 billion ($4.8 billion) in potential growth projects. “These investments draw from both Pembina’s and Inter Pipeline’s portfolios and under the combined entity, both the probability of success and the capital efficiency of this portfolio is enhanced.”

Corporate efficiency gains are expected to include job losses. Pembina and Inter Pipeline predicted the combined firm would generate C$150-$200 million ($120-$160 million) in annual synergies, with C$100-$150 million ($80-$120 million) of the savings achieved by cutting general, administrative and operating costs.

The companies added that the merger enhances their ability to adapt to the new environmental energy era of reducing greenhouse gas emissions by the fossil fuel industry.

“The combined entity will have greater capacity and a broader portfolio of opportunities to pursue ESG [environment, society and governance]-related investments,” said Pembina and Inter Pipeline.

The opportunities “support the transition to a lower carbon economy such as, in the near term, those related to cogeneration and the use of renewable power, and future potential investments related to hydrogen, carbon capture, utilization and storage, and liquefied natural gas.”