After more than a century of production from conventional pools, astronomical volumes still await the new methods of extracting natural gas and oil from Alberta’s shale, according to provincial earth scientists. 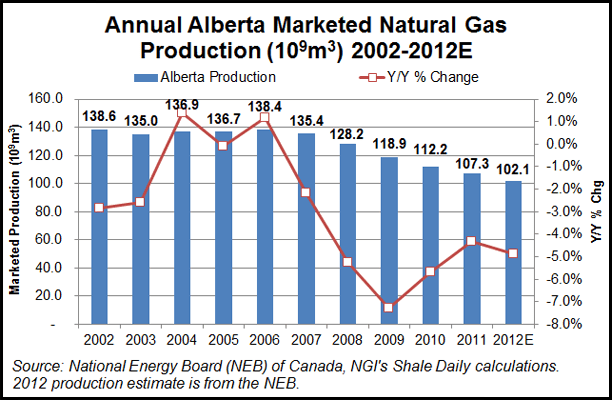 Total volumes embedded in only the five Alberta shale deposits with “immediate potential” for development are colossal: 3,424 Tcf of natural gas, 58.6 billion bbl of gas liquids byproducts, and 423.6 billion bbl of oil, says a new report by the resource appraisal group of Alberta’s Energy Resources Conservation Board (ERCB).

Even the immense current estimates of the province’s total resource endowment could eventually turn out to be conservative, says the report.

“In Alberta no less than 15 formations have the potential for shale- or siltstone-hosted hydrocarbons. Estimates for the total amount of gas in Alberta shale vary widely from 80 to more than 10,000 Tcf.”

The formations were the source rocks for underground migrations of hydrocarbon gases and fluids into the geological “traps” or pools in sponge-like sedimentary layers that flow naturally when punctured by drillbits and have been the prime targets of Alberta development until recently.

The new report is being circulated without public fanfare among petroleum geologists and engineers, as a treasure map identifying locations and hydrocarbon contents of formations known as Duvernay, Muskwa, Montney, Basal Banff-Exshaw, North Nordegg and Wilrich. The gas- and oil-rich layers are widespread across Alberta because of the province’s geological history as the floor of a shallow ancient sea where organic materials such as marine algae and plankton accumulated in vast volumes as continental drift pushed the area around the planet for bygone eons of time.

The 339-page document of geological data for the shale resource endowment in Canada’s mainstay oil and gas supply jurisdiction was released quietly as a technical “open-file report,” while the Alberta legislature debated a regulatory reform bill intended to prepare the province for accelerating use by the industry of its new, aggressive extraction technology.

The Responsible Energy Development Act would convert the 74-year-old ERCB into a bigger watchdog called the Alberta Energy Regulator (AER). The enlarged agency is to absorb duties currently dispersed in an array of government departments to become a one-stop shop for environmental as well as economic, engineering and safety approvals of gas, oil, coal and oilsands projects.

The province’s Conservative majority government, which has 61 members in the 87-seat legislature, shrugged off complaints by splintered opposition parties that the reform bill concentrates too much power in a single regulator and threatens to subordinate environmental concerns to industrial ambitions. After adopting a handful of legal wording amendments to public notice and appeal provisions, the Conservatives kept the bill on procedural schedule to pass this fall. The government timetable calls for the AER to be up and running in mid-2013.

At the same time as the organizational overhaul of resource development supervision advanced, the old ERCB crafted new rules for anticipated growth in oilsands and shale supply development. The “unconventional regulatory framework,” also known as “nonconventional” in an as-yet unresolved jargon debate, focuses on approval formulas for growing uses of the new-wave technology of deep, horizontal drilling married to hydraulic fracturing of dense rock saturated with gas or oil but lacking natural flow channels or cracks.

The Alberta government, earth scientists and regulatory specialists made no predictions about shale drilling activity or production volumes. In Canada use of the technology, imported from the United States, remains in early and often experimental stages except in drilling hot spots known to be exceptionally rich in oil or premium-priced liquid byproducts of gas.

The scientists also cautioned that their geological treasure maps are far from reliable predictions about volumes of oil or gas that might eventually be produced.

“The resource endowment estimates must not be confused with recoverable reserves. It is not likely that the entire area evaluated in any unit [formation] will be economically producible, even assuming that the technology used in hydrocarbon recovery continues to improve in the future.”

Since 2006, Alberta’s marketed natural gas production level has been steadily falling, with the 2012 total estimated to be 4.9% less than 2011, according to Canada’s National Energy Board.