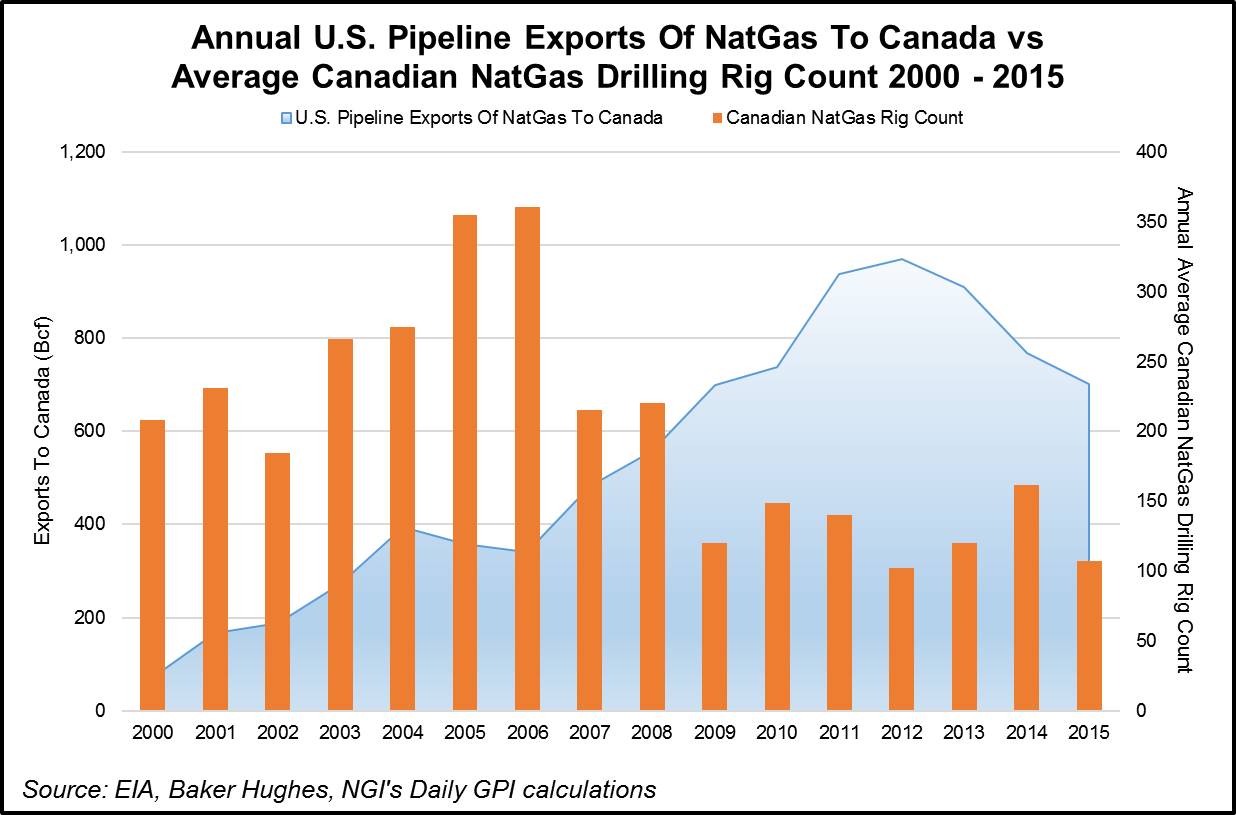 “We’re fighting for our lives,” said Matthew Foss, chief economist in the Alberta Department of Energy.

Foss said gas should be an example to the liquids side of the petroleum industry at the recent annual World Heavy Oil Congress in Calgary.

He urged producers to act on declared intentions to become leaner and fitter rather than repeat mistakes made with gas by being slow to recognize and respond to the shale gale. “We thought we could just produce it and all else would follow,” Foss said.

A lowered activity projection by the Canadian Association of Petroleum Producers highlighted the industry’s troubles. The anticipated 2016 well count — 3,562 for all targets — stands out as the smallest since the group began keeping score in 1977.

But protection against competition is not on government agendas for Canadian markets, which currently import 2.3 Bcf/d of U.S.-sourced gas amid expectations that the northbound flow will grow.

The 11.7 kilometers (7 mile) of 42-inch diameter pipeline to be integrated into other Mainline facilities, “will facilitate access to the growing natural gas supplies in the northeastern United States,” NEB said.

The C$221 million (US$170 million) project grew out of an import traffic agreement by TransCanada and the nation’s three largest distribution companies: Union Gas (Spectra) in southwestern Ontario, Enbridge Gas in the Toronto Region, and Gaz Metropolitain in Quebec.

The Vaughan conduit, named after a nearby Toronto satellite city, is needed by Nov. 1, 2017, to fulfill contracts with 12 shippers to transport about 400 MMcf/d, NEB said.

The volume about matches additional imports that TransCanada forecasts will arrive via its U.S. border crossings in the Niagara Falls area, in a historic reversal of flows on lines that have been mainstay Canadian export routes for generations.

Union, Enbridge and Gaz Metro all told the NEB that the Vaughan project is essential to enhance access to Appalachian gas, from the Marcellus and Utica shale formations in the U.S., for Ontario and Quebec consumers. There is an urgent and pressing need for low-cost alternatives to supplies from the remote Western Canadian Sedimentary Basin, Enbridge said.

Efforts to lower delivered costs of western Canadian gas continue, with TransCanada playing a role as eroded traffic in its national Mainline registers its share in the pain of reduced sales volumes and prices felt by producers on glutted markets.

Options under discussion include a possibility of reducing tolls on at least a portion of the system back to the range of C$1.00/MMBtu (US$0.77/MMBtu) that prevailed while it ran full before the onset of U.S. shale production and export growth.

The idea is a volume discount off the current toll of C$1.42 (US$1.09) for shippers that revive bygone practice of signing long-term transportation service contracts lasting 10 or more years.

TransCanada has a high volume of vacant capacity available for bargain offers. A recent NEB pipeline performance survey reported that the 2015 average throughput in the Mainline’s western leg was 3 Bcf/d or 43% of its 6.9 Bcf/d capacity. In the eastern leg, traffic last year averaged 2 Bcf/d or 38% of 5.2 Bcf/d capacity.

Rival Alliance Pipeline, which carries a liquids-rich gas stream and has overhauled its service menu, ran 94% full in 2015 by averaging throughput of 1.6 Bcf/d with 1.7 Bcf/d of capacity, according to the NEB survey.