The Alberta government on Monday announced a C$825 million ($660 million) takeover of a 50% ownership share in Canada’s newest oilsands refinery near the provincial capital in Edmonton. 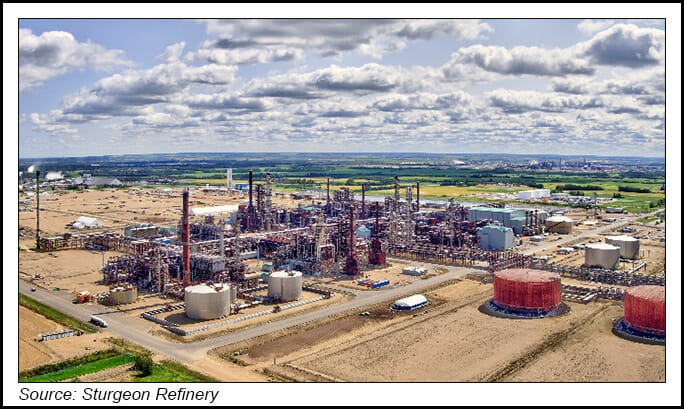 North West Refining Inc. is to be paid C$425 million ($340 million) for its half-equity in the 79,000 b/d refinery north of Edmonton. North West also agreed to forego future tolling revenue. Canadian Natural Resources Ltd., which owns the other 50% of the Sturgeon Refinery, is to be paid $400 million ($320 million ) and become the operating partner.

“Through the agreement, the government is able to capture the value of processing bitumen as both a toll payer and facility owner,” according to officials.

Taking the equity share by the government would eliminate an estimated C$2 billion ($1.6 billion) in tolling payments by Alberta over the next decade. In addition, the province agreed to extend the timeframe to 2058, or another 10 years, to process its oil at the refinery.

The deal overhauls a complicated eight-year-old provincial project support arrangement that became a financial thorn in the government’s side by the time the refinery achieved commercial operation in June 2020.

The new ownership structure “will optimize the refinery’s value and give taxpayers greater control over its operations,” government officials said. “This will not cost taxpayers any additional funds than the government would otherwise be obligated to pay as a toll payer.”