After an encouraging start, the Alberta government has raised official expectations of average natural gas prices for its full fiscal 2014-2015 by 26%. 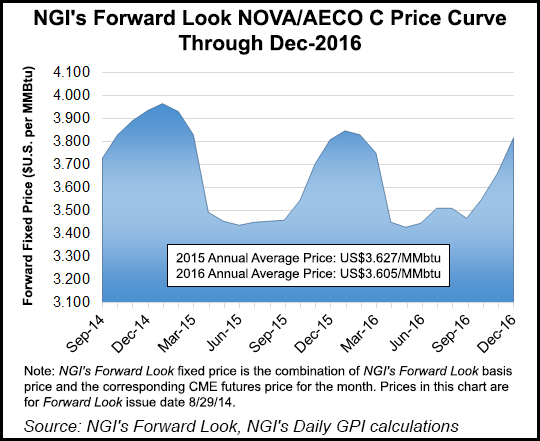 In a statement on the first quarter of the provincial budget year that began April 1, Finance Minister Doug Horner boosted the formal government forecast for gas by C$0.85 (US$0.76) to C$4.14/gigajoule (GJ) (US$3.91/MMBtu).

The optimism followed a strong spring market performance, when Alberta production during April through June did better than expected by not swiftly giving up all price gains made in the severe winter heating season of 2013-2014.

Horner’s initial gas forecast for fiscal 2014-2015 called for a repetition of the Alberta reference price, a weighted average taking into account production volumes as well as market prices, during the previous 12 months: C$3.28/GJ (US$3.10/MMBtu).

Supply gluts and price cuts gutted Alberta gas royalties that netted C$52.7 billion (US$47.4 billion) in 2000-2008, enabling the province to stop running budget deficits and pay off paid off all of its government debt.

But the annual gas take collapsed by 90% off the 2005 peak of C$8.3 billion (US$7.5 billion), down to C$1 billion (US$900 million), as horizontal drilling and hydraulic fracturing of shale deposits flooded markets across North America. Provincial liquor and tobacco taxes of C$1.7 billion (US$1.5 billion) topped Alberta gas royalties by 70% last year.

Despite the new price optimism, the government remains far from predicting that the gas fat years are coming back. Drawing on consultations with producers, industry analysts, and Alberta Energy Regulator reserves and production assessments, the finance department forecasts deterioration in output that will more than offset price gains and leave provincial royalties in the depressed C$1-billion (US$900-million) range.

Even the upwardly revised provincial price expectation is barely half of the C$8.00-plus/GJ (US$7.60-plus/MMBtu) that Alberta production fetched in the pre-shale era of tight markets and fears of North America-wide shortages in the early 2000s.

The industry has largely voted with its feet to turn away from gas supply development except as required by current home markets. In the high-price years, gas was the target for about three-quarters of Alberta wells, show records of the Canadian Association of Oilwell Drilling Contractors and Petroleum Services Association of Canada. Tight or shale oil has emerged as the target for about 75% of drilling, with any new gas supplies generated only as unintended byproducts.