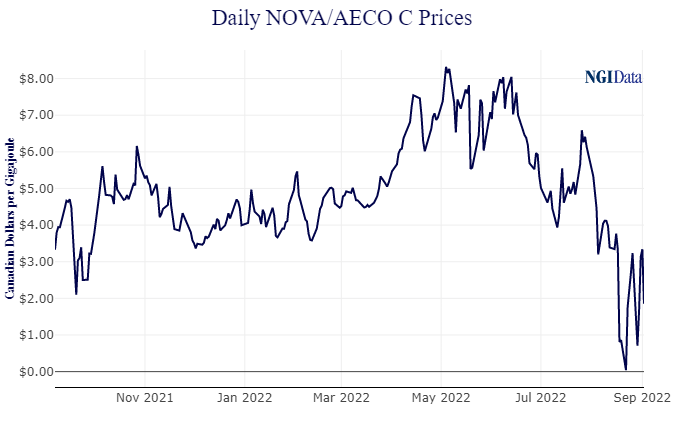 Assuming oil and gas prices remain at current levels through the province’s fiscal year, which ends March 31, 2023, a new government quarterly report on public finances concluded the province would achieve a C$13.2 billion ($10.6 billion) budget surplus for the 2022-23 period.

“For too long, governments in Alberta refused to exercise fiscal discipline during boom times,” said Finance Minister Jason Nixon. “Those days are over.”

An expectation rather than a sure thing, the projected windfall would depend on prices to average $92.50/bbl for oil benchmark West Texas Intermediate and C$5.60/GJ ($4.70/MMBtu) for Alberta natural gas.

“There remains significant uncertainty with respect to energy and financial markets, global economic prospects, inflation concerns and the war in Ukraine, adding even more risk to Alberta’s unique forecast volatility,” acknowledged the report.

The Alberta gas market already confirmed that the provincial royalty forecast is not ironclad, with producers reporting soft spot prices stemming from a coincidence of increased supplies with eroded pipeline capacity tied to summer maintenance and construction.

“Renewed COVID-19 lockdowns in China and a slowing global economy have dampened the outlook for demand,” officials stated. “These factors are expected to weigh on oil prices in the second half of the year, but low inventories and tight global crude supplies will provide some support.”

Alberta’s fossil fuel price forecasts also assume that LNG exports from the United States remain strong, with the Russia-Ukraine war continuing to erode European supplies and cause a scramble for waterborne cargoes.

“The war in Ukraine and sanctions against Russia have led to disruptions in global natural gas supply,” officials reported, noting that shrinking westbound gas pipeline flows from Russia have caused European prices to surge.

Matthew Veazey contributed to this story.