Alberta industry will take over exports to the United States as the engine of growth in Western Canadian natural gas production for the next 10 years, according to a new forecast by TransCanada Corp., the country’s main pipeline operator. 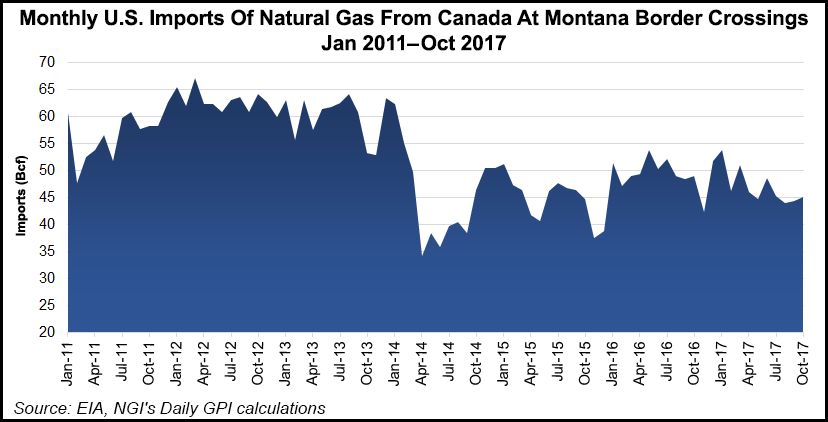 Domestic consumption, propelled by gas-fired thermal oilsands and power plants, is forecast to increase by 30% to 8.2 Bcf/d in 2027 from the 2017 average of 6.3 Bcf/d, the projections indicated.

The drag on overall production is expected to be gas exports, the Canadian industry’s growth driver from the onset of deregulation and energy free trade in 1985 until the rapid rise of U.S. unconventional production after 2007.

Southbound cross-border sales have to swim against a rising tide of competing low-cost U.S. gas production, the TransCanada forecast suggested.

Instead of predicting cross-border sales performance, the outlook only projected Western Canadian volumes “available for export” because of drilling for low cost gas and liquid byproducts in northern Alberta and British Columbia (BC).

Technically recoverable gas in the Western Canadian Sedimentary Basin (WCSB), using horizontal drilling and hydraulic fracturing, is forecast to be an astronomical 1,018 Tcf — a 180-year supply at current production rates.

A delayed start is not ruled out on liquefied natural gas (LNG) overseas exports by proposals that survived high-profile 2017 cancellations of projects on BC’s Pacific coast. But former expectations of rapid, multi-Bcf/d entries into the global tanker trade no longer figure in the Canadian industry outlook.

“Growth in Western Canadian demand is expected to absorb the growth in production from the WCSB,” said the forecast, which supports a 2018-2020 toll application for TransCanada’s Mainline to Ontario, Quebec and the U.S. Midwest and Northeast.

“The majority of expected growth in Western Canadian demand is a result of forecast gas use in the oilsands industrial sector,” said TransCanada.

Power generation also figures in the forecast because of Alberta government-directed replacement of coal-fired plants with wind and solar networks that would need gas-fired backups to maintain electricity grid reliability.

Eastern sales opportunities are forecast to be limited. As in the United States, in Ontario and Quebec Western Canadian gas fights a tide of U.S. unconventional production that is expected to pose stiffening competition as northbound exports over the next 10 years.

“The Mainline is increasingly supplied by gas produced from source basins in the U.S., most notably the Appalachian Marcellus and Utica plays,” said TransCanada. “Total Appalachian production is expected to grow from 22.5 Bcf/d in 2016 to 43.5 Bcf/d in 2027.

“These Marcellus and Utica volumes are increasingly able to deliver into Canadian markets in Ontario,” because of additions to pipelines including eastern legs in TransCanada’s pipeline network. “Appalachian volumes have already displaced Canadian exports to U.S. Northeast markets, and are expected to maintain their share of U.S. markets.”