The outlook brightened Monday for Alberta natural gas producers when the provincial government gave C$500 million (US$375 million) in royalty cuts to sponsors of two petrochemical projects for distribution to raw material suppliers. 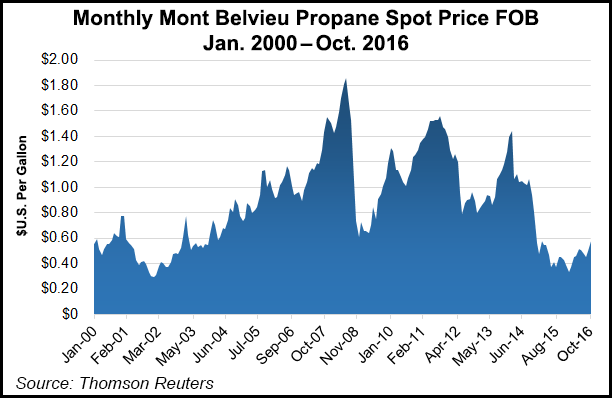 The sweeteners are grants of credits against royalties on 44,000 b/d of gas byproduct propane, for use by plants proposed near the provincial capital of Edmonton to make propylene and polypropylene for plastics manufacturers.

The government awarded C$300 million (US$225 million) in credits to Pembina Pipeline Corp. and the Petrochemical Industries Co. subsidiary of Kuwait Petroleum Corp. for a 22,000 b/d site. Inter Pipeline Ltd. picked up credits worth C$200 million (US$150 million) for another planned 22,000 b/d propane consumer.

The government predicted the two projects would generate up to C$6 billion (US$4.5 billion) in new investment, 4,500 construction jobs and 145 permanent plant operator positions. Construction could begin next year, the government said.

But neither the Pembina-Petrochemical Industries partnership nor Inter Pipeline announced commitments to proceed with building their proposed entries into the highly competitive, global synthetic materials manufacturing industry. The plants have been in on-again, off-again planning stages for years.

The government describes the assistance as meant to offset Alberta disadvantages of high construction costs and long distances to markets. Industrial diversification into resource processing, especially along the petrochemical supply chain, has been a cornerstone of provincial economic policy since the 1970s.

Inter Pipeline, which acquired its project in a purchase of the Williams Companies’ Canadian gas processing assets, described the status of its propylene and polypropylene plant as still “proposed” and “potential.” Inter Pipeline President Christian Bayle said, “We are pleased to have been awarded meaningful incentives to assist with the advancement of this important project.”

Pembina circulated a similar statement to its shareholders, saying that regulatory and environmental approvals plus agreement by its partner from Kuwait remain to be completed before construction starts.