The government of Canada’s chief natural gas-producing jurisdiction has lowered its annual average price expectations by 12%. 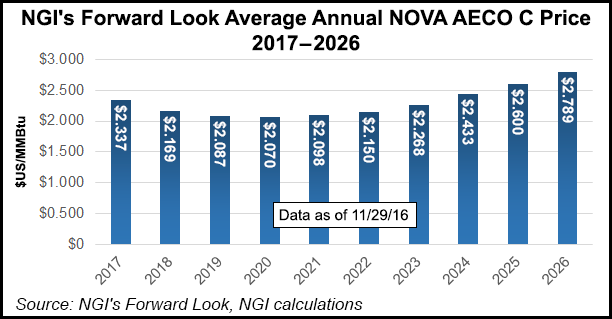 Ceci’s mid-year statement is also wary of oil commodity-futures trading highs fueled by hopes for agreement among the Organization of Petroleum Exporting Countries to freeze or cut production.

The energy price outlook remains “muted” on all fronts, the Alberta government statement says. The official prediction for oil remains an annual average of US$45/bbl.

As in oil’s case the provincial gas outlook recognizes adverse conditions on the supply side of the market caused by surpluses and competition, especially from aggressive shale development in the United States.

“The outlook for natural gas prices remains soft as the North American market continues to be awash,” says Ceci’s statement.

The government outlook echoes industry doubts that showed in failure, announced Nov. 15, to refill TransCanada Corp.’s half-empty gas Mainline by discounting tolls. Shippers turned down bargains that could only be achieved by being optimistic enough about Canadian and U.S. markets to sign 10-year transportation contracts.

Soft gas markets continue to contribute to severe distress in the budget, which is forecast to run a C$10.8 billion (US$8 billion) deficit for 2016-2017, a far cry from provincial surpluses and debt-free status until the 2014 energy price slump.

Bad habits have overtaken gas as earners for the treasury. Alberta’s sin taxes — liquor and tobacco levies, plus gaming and lottery proceeds — are forecast to hit C$3.3 billion (US$2.4 billion) in 2016-2017.

The most encouraging word that Ceci delivered about the rest of the provincial economy was that conditions appear to be “stabilizing” after the steep drop driven the more than two years of gutted energy prices.

Ceci told a news conference “it’s too soon to say Alberta’s economy turned a corner.” His finance department’s formal statement added a warning a turn for the worse is conceivable for Canada’s chief gas and oil-producing jurisdiction.

“The downturn has been deeper than previously expected,” said the statement. “External risks have increased. Global economic growth continues to underwhelm, while events such as Brexit, the outcome of the election in the United States and turbulence in European financial markets have heightened uncertainty.”