The U.S. Fish and Wildlife Service (FWS) has improperly mapped the western boundary of the Arctic National Wildlife Refuge (ANWR), including nearly 20,000 acres within ANWR that the state of Alaska believes should be under its jurisdiction, according to Gov. Sean Parnell. 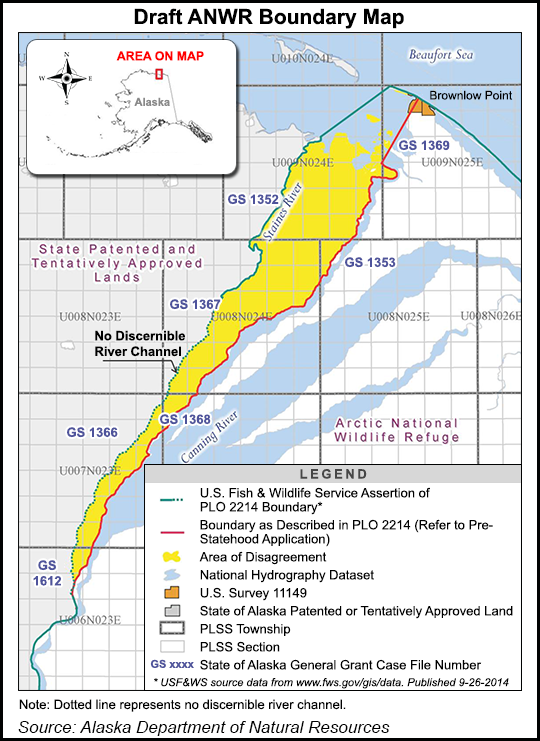 The state is petitioning the U.S. Bureau of Land Management (BLM) to hand over the acreage, saying it is important to North Slope oil and gas development.

Parnell’s administration is taking up the boundary dispute, which dates back to the 1960s, after previous work by state and federal agencies. The renewed effort began in 2012 and included historical and legal research as well as a field inspection by DNR and the Department of Law in July, Parnell’s office said.

Alaska previously requested the uplands at the western boundary of ANWR between the Staines and Canning Rivers under the Alaska Statehood Act and Alaska National Interest Lands Conservation Act.

“My administration began a thorough review of the boundary dispute after the [Alaska] Department of Natural Resources [DNR] received bids in 2011 for oil and gas tracts on tidal and submerged lands at the state-federal boundary,” Parnell said last week. “I’m pleased that we’ve developed a solid case for priority conveyance of lands the state of Alaska originally selected in 1964.”

The disputed lands could be a factor in future oil and gas development on the eastern North Slope, according to the governor. “Just a few miles away, we are seeing billions of dollars of investment at the Point Thomson field,” Parnell said.

“Alaskans have suffered from many roadblocks to resource development on federal lands,” said Alaska Natural Resources Commissioner Joe Balash. “Our hope is that the BLM will move quickly to convey lands that we can offer for oil and gas leasing and development.”

The state has been in a tug-of-war with the federal government over ANWR. Earlier this year, Alaska filed a lawsuit challenging the FWS’s refusal to consider the state’s exploration plan for ANWR’s coastal plain, or 1002 Area (see Daily GPI, March 14).