Alaska lawmakers on Sunday gave their OK for the state to take a 25% ownership interest in a pipeline and liquefied natural gas liquefaction and export project that would commercialize the state’s long-stranded North Slope natural gas reserves. 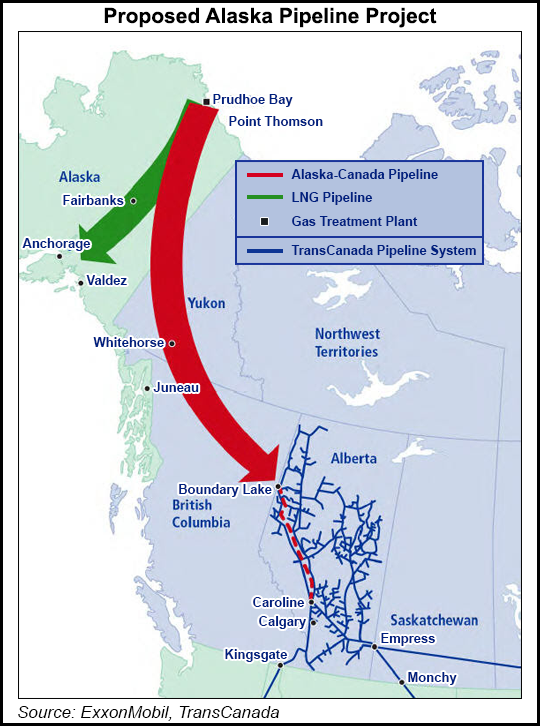 “By passing SB 138, the legislature has put Alaska on a path to controlling her own destiny by becoming an owner in the Alaska LNG Project. Alaskans have waited a long time for a gasline, and for the first time in our history, we have alignment, authorization from the legislature, and a clear path forward,” said Gov. Sean Parnell.

The bill — which passed the Senate on a vote of 16-4 and the House on a vote of 36-4 — was one of Parnell’s main legislative initiatives. It amends state laws to allow negotiations for the state to be an equity partner in the project

“The legislation allows the state to take ownership of about 25% of the gas produced for the project in lieu of receiving payments for its royalty share and production taxes,” said Larry Persily, federal coordinator for Alaska natural gas transportation projects. “The state would then sell its 25% of the gas and use the proceeds to pay its processing, pipeline and liquefaction expenses, depositing the balance in the state treasury.”

The state would take an ownership stake in the LNG plant equal to its percentage of gas flowing down the line and would contract with TransCanada for the company to take the same percentage ownership on behalf of the state in the pipeline and North Slope gas treatment plant, Persily said.

Signing a deal with TransCanada to stand in for the state on the pipeline and treatment plant would save the state from having to come up with about $6 billion to $7 billion for its 25% stake in those components at the same time that the state would be funding $6 billion to $7 billion for its 25% stake in the LNG plant, Persily said. In return for signing on for the pipeline and treatment plant, TransCanada would be allowed at least a 12% return on its equity investment, built into the tariff it will charge for moving the state’s gas.

In an Anchorage Daily News editorial, Alaska attorney Lisa Weissler, who has expertise in natural resources law, criticized the legislation as giving the producers a good deal and the state a bad one. “Because the state cannot afford the full costs of ownership of our 25% share, the pipeline company, TransCanada, will own the state’s share of the pipeline and gas treatment plant with an option for the state to later acquire 40% ownership in those components,” Weissler wrote. “The state will repay TransCanada’s costs by paying a tariff for shipping our gas on our piece of the pipe.”

With passage of the legislation, the role of AGDC has been expanded. The agency is now empowered to carry the state’s equity interest in the project infrastructure, particularly the liquefaction and marine facilities. AGDC will also continue to pursue development of the Alaska Stand Alone Pipeline (ASAP) Project parallel to the Alaska LNG Project.

“SB 138 is a huge validation of the legislature’s decision to create an Alaskan-owned pipeline development company,” AGDC President Dan Fauske said. “AGDC will now lead the state’s participation in this exciting LNG export project, while continuing to advance ASAP, the smaller in-state alternative. “The work we’ve done to date is of significant value to the Alaska LNG Project, and going forward, AGDC will leverage the work of both efforts until we’ve gathered the facts necessary to make the most informed decision.”