Despite placing a record 900 tracts of the National Petroleum Reserve in Alaska (NPR-A) up for auction Wednesday, oil and natural gas producers stayed away, leaving the Department of Interior’s (DOI) Bureau of Land Management (BLM) left to count a paltry seven bids. 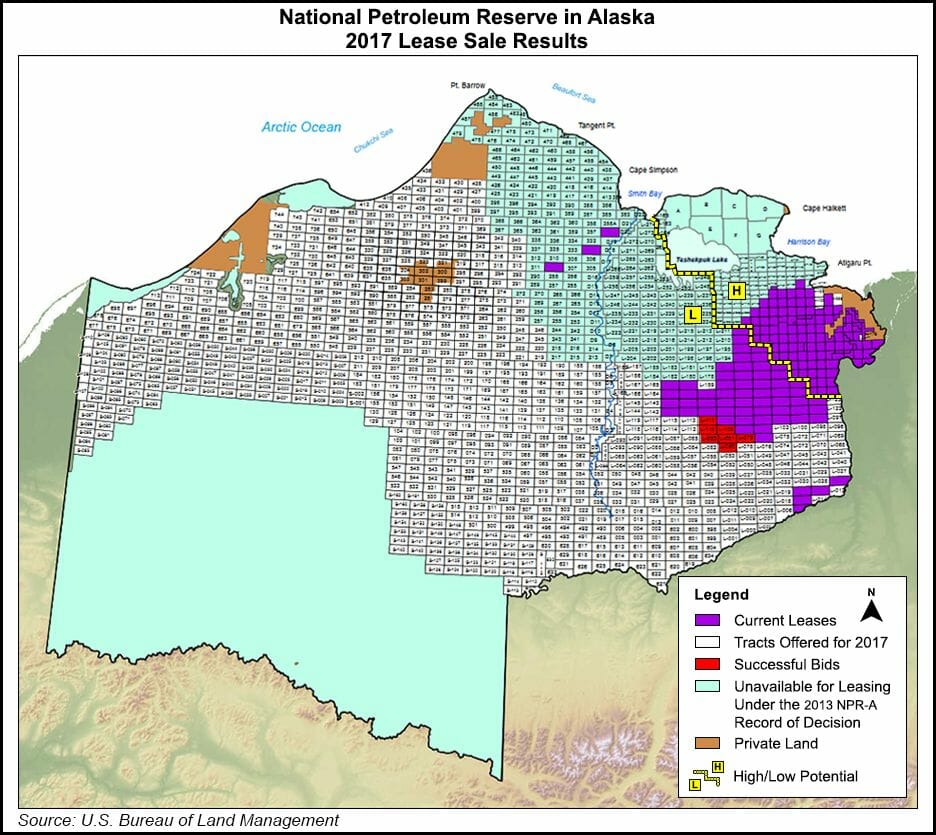 On Thursday, the BLM said subsidiaries of ConocoPhillips, the world’s largest independent, and Anadarko Petroleum Corp. were the high bidders for seven contiguous tracts in the northeastern area of the 22.8-million-acre reserve. The bids collectively totaled about $1.16 million, and ranged from $150,494 to $172,760 ($13.25-14.99/acre).

The leases have primary terms of 10 years. Since the tracts are considered to have a low potential for oil and gas, a 12.5% fixed royalty rate and a rental rate and minimum royalty of $3/acre would apply. BLM announced the sale last October.

Last January, ConocoPhillips and Anadarko announced an oil discovery, Willow, after two test wells targeting the Brookian Nanushuk formation struck oil, and said it could produce up to 100,000 b/d. Initial commercial production may be as early as 2023, pending permit approvals and competitive project economics.

The 900 tracts placed up for auction totaled 10.3 million acres, making the sale the largest in the reserve’s history. The tracts constituted all of the remaining acreage available for development following a 2013 record of decision enacted during the Obama administration.

The BLM had pledged that oil produced from the lease sale, the 13th in the NPR-A since 1999, would help replenish the Trans-Alaska Pipeline System, an issue pushed by Republicans in Alaska and Washington, DC. It was unclear how those plans would be impacted. By comparison, the BLM received $18.8 million from its NPR-A auction last December, with 67 tracts receiving bids. Nearly all of the bids at last year’s auction were also submitted by ConocoPhillips.

In November 2015, ConocoPhillips approved $900 million in funding for the GMT prospect. At the time, the Houston-based independent said it expected GMT to come online in late 2018 with peak production of 30,000 b/d.