The long-planned Alaska liquefied natural gas (LNG) project could competitively rival both foreign and Gulf Coast competitors with deliveries to Asia, according to a new cost analysis by Wood Mackenzie. 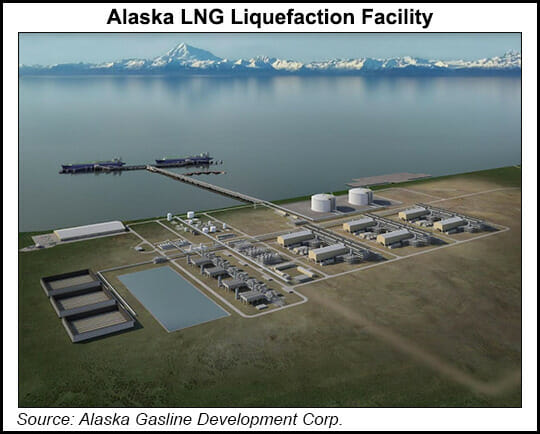 Alaska LNG could deliver super-chilled gas to Japan with a cost of supply (CoS) of $6.70/MMBtu, under the conditions studied by the consultancy. The latest CoS estimate is a reduction from $11.70/MMBtu reported in 2016, when Wood Mackenzie was last commissioned by BP plc and ExxonMobil, the project’s biggest backers at the time.

The 43% reduction reflects improvements implemented by state-owned Alaska Gasline Development Corp. (AGDC), as well as some assumptions that the researchers made about the future.

The entire Alaska LNG project has an estimated cost of $38.7 billion after being revised downward by $5.5 billion in 2020. The current scope calls for three liquefaction trains with capacity for 20 million metric tons/year (mmty). It also would include an 807-mile pipeline to move gas to the facility, a North Slope gas treatment plant and facilities to connect the Prudhoe Bay gas complex to the treatment plant.

Once completed, the project would span from the northern shores of the state into the Kenai Peninsula, where gas would be liquefied at the facility in Nikiski. Plans have also called for two marine berths.

AGDC has been exploring ways to attract new sponsors for the project. As a part of that strategy, the project was split into three phases and the corporation has introduced a new funding structure that Wood Mackenzie credited as adding savings to the project.

AGDC has reported its projected construction costs are already 12% lower under current designs, but it is also relying on a 70% debt-funded third-party tolling structure to cement interest in Alaska LNG. Wood Mackenzie’s analysis predicted the changes would provide much needed value for the project’s potential deliveries.

However, the consultancy noted that Alaska LNG still needs one other key component to rival other LNG facilities.

Wood Mackenzie’s analysis assumes that a federal loan guarantee, created by the bipartisan Infrastructure Investment and Jobs Act Congress passed in November 2021, would make Alaska LNG more competitive. With a secured loan guarantee, covering up to 80% of the project, Alaska LNG and its partners could land lower-interest financing and reduce their overall delivery cost, Wood Mackenzie stated.

AGDC Spokesperson Tim Fitzpatrick told NGI that the corporation’s strategy is focused on both securing a guarantee and firm, long-term commitments for its capacity. The company has been pursuing “principal LNG buyers in the Asian markets” with convenient shipping routes to Alaska, but hasn’t confirmed any final agreements yet.

The interest of Asian buyers and the future of demand across the continent will be critical for both Alaska LNG’s creation and future sustainability, which is why the firm made some key assumptions about natural gas use over the next several decades.

Wood Mackenzie expects trends in LNG demand and supply to create a serious gap in 2028, with spot prices to Japan possibly averaging $8/MMBtu by 2030. The report’s authors predicted global gas demand will peak in 2040, adding that already visible trends of declining gas production in parts of Asia could sustain “robust” LNG demand into 2050.

The predicted timeline and competitive edge paint a picture for Alaska LNG to have a golden opportunity to fill the growing gap at just the right time, but it also hinges on the more than a decade old project springing to life in the next few years.

In February 2021 AGDC announced plans with an unnamed private firm for the $5.9 billion natural gas pipeline from the North Slope to Fairbanks and said it could start flowing gas through the 500 miles of pipe by 2025, if confirmed.

Fitzpatrick told NGI the company has also made progress in discussions with its other phases since the early 2021 announcement. He added, however, that the firm is waiting for the next stage to reveal definitive details.

“AGDC has identified developers for the gas treatment plant and the pipeline and is in discussions with world-class LNG developers regarding the LNG plant,” Fitzpatrick said.

Alaska LNG has had the greenlight from FERC to export 20 mmty since early 2020, but that approval has also recently come under fire.

After President Biden issued executive orders at the beginning of his presidency in 2021 that required further review for previously authorized projects and leases, the Department of Energy announced plans to create a supplemental environmental impact statement for the project.

The new statement would include additional information about impacts from natural gas production on Alaska’s North Slope and life-cycle calculations of the greenhouse gases released from LNG exported through the terminal, as required by the administration.

The effort didn’t stop environmental groups from filing a request in federal court a few months later in September 2021 requesting that Federal Energy Regulatory Commission approvals for Alaska LNG be completely vacated since the commission didn’t consider the additional implications of allowing the terminal to proceed.