The U.S. Department of Energy (DOE) on Thursday issued final approval for liquefied natural gas (LNG) exports from the Alaska LNG project to all countries, including those without U.S. free trade agreements (FTA). 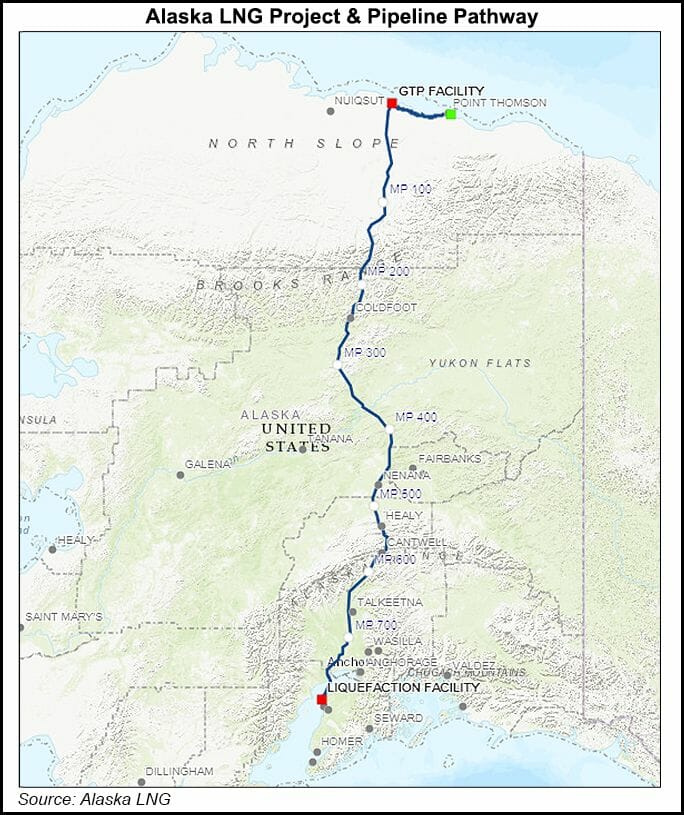 The announcement by Deputy Secretary of Energy Mark W. Menezes follows Federal Energy Regulatory Commission approval of the siting, construction and operation of the liquefaction terminal and a related 800-mile pipeline.

The pipeline would supply the project with natural gas produced on the North Slope. The export terminal is planned for the Nikiski area of the Kenai Peninsula.

The latest DOE approval authorizes LNG exports of up to 2.55 Bcf/d from the plant to any country with which trade is not prohibited by U.S. law or policy. DOE approved exports to FTA countries from the project in 2014.

Menezes said the latest approval “allows a path for the otherwise stranded gas resources on the North Slope of Alaska to be made available both to the people of Alaska and to the export market.”

Alaska LNG is the 20th large-scale export facility to secure final long-term DOE permission for global exports. It also is the second on the West Coast, following the approval last month for the Jordan Cove project in Oregon.

If built to its authorized capacity, the project, including the pipeline, would require investment of more than $38 billion, creating up to 10,000 jobs during design and construction, and up to 1,000 permanent operational jobs, DOE said.

Alaska LNG developer, state-owned Alaska Gasline Development Corp., has reportedly been seeking to hand off the megaproject to a new sponsor if the project is found to still be economically feasible.

If the project goes forward, it would be anchored by the Prudhoe Bay and Point Thomson fields, which are expected to eventually produce a combined 3.5 Bcf/d.The latest export authorization follows a record of decision signed this week by Secretary of the Interior David L. Bernhardt approving the Coastal Plain Oil and Gas Leasing Program in Alaska’s Arctic National Wildlife Refuge.

Natural gas futures prices strengthened Thursday after the latest government storage data pointed to continued tightness in the market. The May Nymex contract settled at $2.749, up 5.7 cents from Wednesday’s close. June climbed 5.5 cents to $2.831. Spot gas prices were mixed, but fell off sharply on the East Coast as the coldest temperatures…