After decades of attempts to commercialize its vast North Slope natural gas reserves, Alaska is on the cusp of years more work. But now, producer, pipeline and state interests are aligned; there’s a mandate from lawmakers to get a project done; and a real plan has begun to take shape. 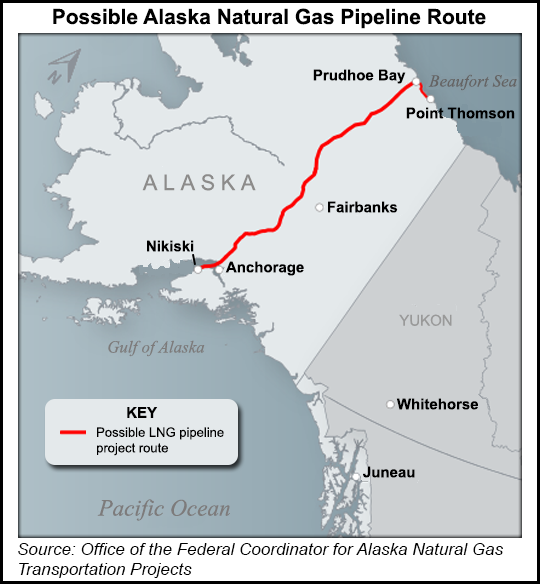 Last month, state lawmakers overwhelmingly passed (36-4 in the House; 16-4 in the Senate) legislation (SB 138) to enable the state to take a stake in the pipeline and liquefied natural gas (LNG) export project that would tap North Slope gas for domestic use and export to world markets, the Alaska LNG project (AKLNG) (see Daily GPI, April 21). The bill is on its way to the desk of Gov. Sean Parnell for his signature.

Signatures will then be gathered on interim agreements among the producers, pipeline company TransCanada Corp. and the state, summer field work will begin, and parties will further engage with FERC and the U.S. Department of Energy (DOE) on permitting and licensing issues, Balash said.

“We’ll be moving fairly quickly to get those interim or pre-FEED [front end engineering design] agreements executed,” Balash said. “Once they’ve been executed, we will turn our attention to the longer-term agreements. We will also begin to engage the market, and by that I mean the LNG buyers over in Asia. So the timeline for that is a little fluid at this point.”

Besides securing LNG buyers — which could potentially become equity partners in the project — issues will need to be worked out at the Federal Energy Regulatory Commission (FERC) and DOE; the state and the producers will have to come to an agreement on how royalties are to be paid; and the number and location of tie-ins with the natural gas pipeline will need to be determined.

The state has a year-old memorandum of understanding (MOU) with DOE that covers the parties’ interest in research and development of fossil fuels, particularly natural gas hydrates.

“And that, of course, has given a platform from which to talk to the folks at DOE about any number of things, including how Alaska LNG projects ought to be treated with respect to others in the Lower 48,” Balash said. “And while they have been noncommittal in that regard, we think we’ve been able to make some pretty good points with them, and we think they’re listening.”

Balash cited the recent DOE renewal of ConocoPhillips’ permit to export LNG from its terminal at Kenai, AK (see Daily GPI, April 14). The agency did not put the company’s application to export to non-free trade agreement countries at the back of the queue of current applicants for Lower 48 projects, he noted, emphasizing that he cannot speak for DOE.

“That gives us reason for optimism that the larger North Slope project would be similarly treated. It is, the larger north Slope project, the subject of a presidential finding that was issued back in 1989 by President Reagan on his way out of office, and we believe that there’s much in that finding that remains valid and true today. We’ll see what the Obama White House thinks about that, but I’m looking forward to Reagan and Obama being on the same page on something.”

Meanwhile at FERC, it remains to be seen what section of the Natural Gas Act (NGA) under which the Commission will choose to review the project, Section 3 or Section 7. Balash said he couldn’t speak for the regulator, but Alaska’s hybrid pipeline-LNG project might fare better, at least from the state’s perspective, under NGA Section 3.

“…[W]e’ve got an LNG facility that’s clearly going to be regulated under Section 3 that is connected to its gas resource by a pipeline that arguably is also subject to Section 3 rather than Section 7 of the Natural Gas Act,” Balash said. “And so there’s some question out there as to whether Section 3 is the regulatory jurisdiction for the entire project. We’ll hopefully see some engagement here with FERC soon to sort some of that out and get some clarity on the question.”

An NGA Section 3 review will typically look at life, health and safety issues related to an LNG project, but Section 3 says little about regulation of facility access by third parties or rates for service. Section 7 “…gets deep into those two subjects for pipelines,” Balash said. “Access and low tariffs are high priorities of the state of Alaska that we think can be accomplished in a Section 3 context, particularly if we’ve got the proper commercial agreements with the project to ensure those things.

“But at the end of the day, it really doesn’t matter if the state of Alaska and the project sponsors think it ought to be Section 3 or Section 7 or both, what’s going to matter is what FERC thinks it ought to be.”

Tax collection at the state level is another matter. Recently passed SB 138 established a gross percentage production tax of 13%. Alaska has the option of collecting its share in-kind, or in the form of actual commodity, or in-value, receiving a payment for the value of its share. With oil production, the state historically has switched from one to the other and back, choosing the payment form that is most advantageous at the time. With natural gas and LNG it’s not as simple, Balash said.

“…[W]hen it comes to natural gas and specifically the LNG world, the nature of that business is such that the state switching between in-kind and in-value creates problems, commercial problems that lead to a degradation of the value of the resource or commodity for both the producer and the state,” he said. “In certain circumstances, like we’re talking about here with AKLNG, where you’ve got all of the proven resource tied up in long-term sales contracts, a switch from in-value to in-kind potentially leaves a producer short of gas and potentially capacity in the infrastructure itself.”

Recognizing the difficulty, Balash said the state acknowledges that it’s reasonable to limit its ability to switch from one form of royalty payment to the other.

“Further, the companies have identified a combination of things that really, from their perspective, makes it important for the state to go in-kind and participate in the project directly. They’ve got their reasons, and we, in our study that we conducted last year, found that under the right circumstances, that actually can improve the state’s value proposition relative to going in value.”

Balash said Alaska is prepared to take its cut in-kind as long as the producers are willing to step up and provide gas marketing services at cost and providing the state’s gas the same access to market as their own gas.

“…[F]undamental to all that is will the producers themselves offer to market the state’s share of LNG on the same terms that they’re getting. What we don’t want is to find ourselves in a position where we’re having to market our own gas and not have the contacts or expertise that the producers do and wind up with a lower price as a consequence,” he said.

Alaska will be talking with the producers about this and will be engaging with the gas market independently as well, Balash said. “We may be better off in certain circumstances selling directly to the market, but we may also find ourselves best left in the hands of the three producers. That’s one of the things that we’ll have to consider as we go forward. But the fundamental question, sort of the threshold question is, whether or not the three producers will in fact provide us the same opportunity they’re getting.”

Now that Alaska gas is targeting the world rather than just the Lower 48 via a pipeline route through Canada, only a portion of pipeline routing work from previous projects is relevant today. Predecessor gasline projects — the Alaska Pipeline Project (APP) and the Denali project — both were starting at the same place up on the North Slope with a gas treatment plant and then following the Trans-Alaska Pipeline System corridor down to Delta Junction and then continuing on to the Canadian border.

“It’s going to be basically from Livengood south that a whole lot more work is going to need to be done here in terms of baseline data gathering,” Balash said. The location of the liquefaction and export terminal wasn’t announced until last October (see Daily GPI,Oct. 8, 2013), “so that meant the summer field season that AKLNG conducted last year was all done from Livengood north.”

According to a heads of agreement signed by the project parties, there are to be at least five offtake points for gas on the pipeline between the North Slope and Nikiski, where the LNG liquefaction and export facility is to be constructed. The locations of offtake points are to be determined by the governor’s administration in concert with the Alaska Gasline Development Corp.

“Certainly, we know we’ll need to take gas off in the Interior where one of our larger populations is, in the Fairbanks North Star Borough, and we know we’ll need an offtake point likely somewhere in the Matanuska-Susitna valley, where another large population center is, and then one prior to entry into the liquefaction plant at Nikiski,” Balash said.

“…[A] strong candidate is going to be at Livengood. There’s a goldmine that’s in the development stage right now that potentially could be a large user of natural gas.” Balash said. “We want to make sure that mine has the ability to take gas off right there.” The point where the pipeline crosses the Yukon River could eventually see development of propane barging capabilities or a micro-LNG plant to serve end-users along the river, he said.

Besides the offtake points, the project will contemplate the pre-building of on ramps to the pipeline for future production. “…[U]p in the Foothills area on the north side of the Brooks Range, there’s tremendous gas potential, and we’re probably going to want to see an access point basically pre-built into the line so that if and when that other natural gas is proven up and commercialized, it has a way to get to the pipe rather than going all the way north to the top.”

There is a window of opportunity for the project, but it’s not so much related to overseas markets for LNG as it is to the fact that the state, producers and TransCanada are all aligned to move a project forward. It won’t stay like that forever, Balash said.

“If there’s anything history has taught us it’s that getting all of the parties on the same page is difficult,” he said. “The fact that we have that alignment right now is of tremendous benefit to the project and the state’s interest in seeing the project go forward coincides with some things we see going on in our fiscal picture with regard to cash reserves and the revenue that’s currently generated by oil production, and oil production alone.”

In other words, with revenue from oil dwindling, the state needs to commercialize its natural gas while doing what it can to support oil production.

“We think that Alaska is ready for some really big decisions on this…Alaska is ready. This isn’t going to happen overnight, but we’re ready and we’re serious.”