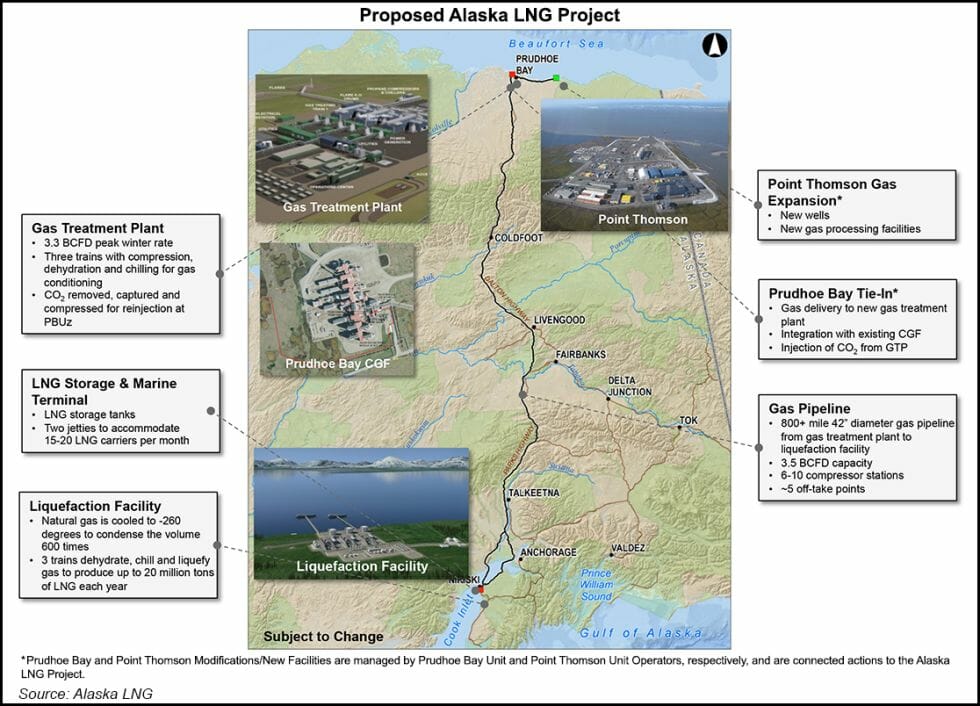 The study would also further explore whether Alaska’s Cook Inlet basin could be used to sequester the carbon dioxide emitted in the process, creating a zero-carbon fuel that is easier to transport than hydrogen.

“Ammonia is central to the zero-carbon energy strategies of nations across the Pacific Rim, including goals by Japan and Korea to become carbon neutral by 2050,” representatives for AGDC wrote. “Japan plans to grow ammonia use in energy production to three million tons per year by 2030, up from zero today.”

The study could identify another commercial channel to bolster AGDC’s Alaska LNG project, which has been in development for more than a decade. Like ammonia production, the organization has been promoting the terminal as a cost-effective and source of LNG for Asian buyers.

Round-trip tanker transport from Alaska to key Asian markets is more than 12,000 miles shorter than from the U.S. Gulf Coast, according to AGDC.

A Kenai LNG terminal, currently targeted for transition to an import terminal for Marathon Petroleum Corp., previously delivered LNG to Japan for more than 40 years.

The estimated $39 billion project is still unsanctioned. AGDC took over as sponsor in 2016 after affiliates of BP plc, ConocoPhillips and ExxonMobil dropped out. The project received an updated draft Environmental Impact Statement in July from FERC, which concluded the project could be built without significant impacts to the environment.

The project has had the greenlight from the Federal Energy Regulatory Commission to export 20 million metric tons/year of LNG since 2020.

If completed, the project would span from the northern shores of the state into the Kenai Peninsula, where gas would be liquefied at the facility in Nikiski. Plans have also called for two marine berths.

In July, AGDC spokesperson Tim Fitzpatrick told NGI the organization was still working to place Alaska LNG under private ownership. If that transition is accomplished, a final investment decision could follow with early construction expected in 2024. That could place a startup of full operations sometime in 2030.
In February 2021 AGDC announced plans with an unnamed private firm for the $5.9 billion natural gas pipeline from the North Slope to Fairbanks and said it could start flowing gas through the 500 miles of pipe by 2025, if confirmed.