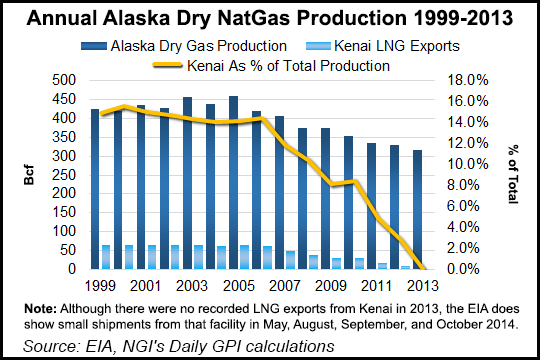 REI was formed to explore the possibility of purchasing natural gas from Alaska and to build liquefaction facilities in order to export LNG to Japan (see Daily GPI, June 3, 2013; Nov. 21). REI has an office in Anchorage and has conducted studies that show an Alaskan LNG export project is viable.

“This agreement is an extension of Alaska’s longstanding partnership with Japan in energy markets,” Walker said.

After the 2011 earthquake in Japan shut down the Fukushima Daiichi nuclear power plant, several Japanese prefectures have been looking to replace nuclear energy with LNG. REI chose Alaska as the preferred source of LNG for Japan, according to the governor’s office. The state has been providing LNG to Japanese markets for more than four decades from a terminal on the Kenai Peninsula.

Walker said REI has contacted many Japanese governmental and private organizations that also want to buy gas from Alaska, and the company is also working on a smaller LNG project in Alaska’s Cook Inlet to begin deliveries by 2020. The state is working with REI on this project through a coordinated permitting system and potential partial funding through the Alaska Industrial Development and Export Authority.

“The key to every growing economy is low-cost energy,” Walker said during his swearing in earlier this month. “We don’t have a resource problem in Alaska. We have a distribution problem. I am steadfastly committed to developing that distribution system, to bring Alaska’s natural gas to Alaskans and to the lucrative world markets.”

Alaska is the one U.S. state that does have a history with domestically sourced LNG exports. ConocoPhillips’ Kenai LNG export facility began operating in 1969, and between 1999-2006 the facility consistently shipped 60-66 Bcf of natural gas per year, primarily to two large utilities in Japan, according to Energy Information Administration (EIA) data. Those figures represented approximately 14-16% of total Alaska dry natural gas production during those years. Annual Alaskan LNG exports began falling in 2007, and on March 31, 2013, the Kenai LNG Plant export license expired. EIA data show no exports from Kenai for all of 2013.

However, shipments from Kenai have resumed in recent months with the granting of a renewed export license (see Daily GPI, April 14).