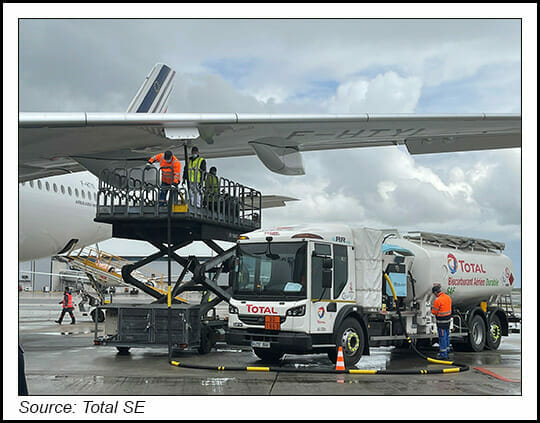 Air France Flight 342 departed from Groupe ADP’s Paris-Charles de Gaulle airport in France for Montreal, Canada with its tanks filled with SAF produced in Total’s La Mède biorefinery in southern France and its Oudalle factory. The aircraft did not require any modifications to its engines, storage or distribution infrastructure to incorporate the biofuel.

France’s current climate legislation calls for all French aircraft to fuel with at least 1% SAF by 2022. By 2025, all French aircraft must use at least 2% biofuel, and by 2030, 5%. Total will assist in France’s efforts by producing SAF at its Grandpuits zero-crude platform near Paris beginning in 2024.

The gradual introduction of SAF will help to significantly reduce carbon dioxide (CO2) emissions from air transportation, according to Air France. Flight 342 averted 20 metric tonnes of CO2 with its 16% mix.

“The development of biofuels is part of Total’s broad-energy strategy for decarbonizing the transportation industry. After successfully launching production of sustainable aviation fuels at our facilities in France last March, we are continuing to adapt our industrial facilities to prepare for the growing demand from the aviation industry in the coming decade,” said Total CEO Patrick Pouyanné.

Air France has been testing SAF reliability for several years. From 2014 to 2016, the company completed 78 flights powered by a 10% SAF blend with the help of a Total affiliate. Tests demonstrated SAF had no effect on the reliability of airline operations. Prior to this, Air France carried out its first SAF-powered flight in 2009.

Airbus SE’s Airbus A350 was used for this flight, which consumes 25% less fuel than previous Airbus models. Airbus is currently experimenting with the possibility of an airliner capable of consuming 100% SAF within the next few decades. Airbus has also installed SAF refueling stations at its own industrial facilities for production operations in order to decarbonize all of its industrial operations.

“Sustainable fuels are a major lever for achieving our objectives of decarbonizing the aviation sector,” said Airbus CEO Guillaume Faury. “Coordinated action by all stakeholders is needed to increase the share of these sustainable fuels, which can be used today on up to 50% of our aircrafts, without any modification or operational impact, thereby reducing their environmental footprint.”

Alternative fuels and SAF are quickly becoming a popular option for companies looking to achieve net-zero emissions by 2050. Most recently, supermajor Royal Dutch Shell plc invested in LanzaJet Inc., which specializes in alcohol-to-jet fuel among other SAF solutions.