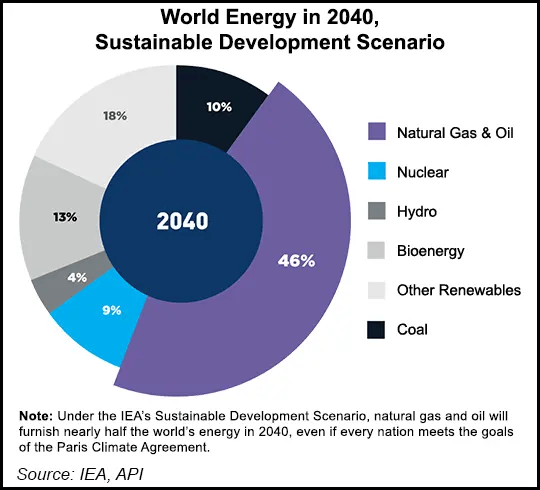 API, the largest U.S. oil and gas trade association, is asking energy companies to track emissions and voluntarily disclose to the public details, including levels of flared natural gas. The tracking would help companies in meeting their environmental, social and governance (ESG) initiatives. The goal is to enable investors and the public to compare a given company’s progress against its peers.

“We really believe this will drive true consistency” across the oil and gas sector, API’s Aaron Padilla, manager of climate and ESG policy, told reporters during a conference call on Thursday.

API said the template standardizes the names of indicators, units of measurement and the definitions for reporting boundaries. That would enable comparable reporting from one company to another.

API’s template also includes indicators on a company’s efforts to mitigate emissions, a section for future targets, and an area to report third-party verification of GHG reporting. The mitigation section contains indicators on capturing carbon dioxide for utilization or storage. It also provides indicators on purchasing credits for renewable energy and total offsets retired by a company.

“This gives a foundational picture of a company’s work to mitigate emissions,” API said in announcing the new guidelines.

The announcement comes on the heels of plans by the U.S. Securities and Exchange Commission (SEC) to introduce requirements across all sectors for companies to disclose their work to combat climate change. Details are in the works, but the SEC has said a government mandate, as opposed to voluntary reporting, is the only way to ensure all companies participate.

“Further, I’ve asked staff to consider potential requirements for companies that have made forward-looking climate commitments, or that have significant operations in jurisdictions with national requirements to achieve specific, climate-related targets,” SEC Chairman Gary Gensler said in prepared remarks for a presentation this week.

The challenge, regulators have said, is developing specific measurements that help investors understand a company’s work to reduce emissions and risks to their financial health. Several energy companies have opposed the SEC plan in writing, saying it would only confuse investors with apples-to-oranges comparisons. A natural gas producer, for example, hardly resembles a company like Apple Inc., the argument goes.

API’s Frank Macchiarola, senior vice president of policy, economics and regulatory affairs, tried to walk a fine line on the SEC proposal during the media call.

“It’s premature to speculate what our next steps would be,” he said. “We’ll see what the SEC ends up proposing.”

However, Macchiarola said the API template “is the most meaningful way” to provide “significant transparency and comparability” because it is tailored for oil and gas companies. He said it could be used by investors, but “first and foremost, this is meant for the public” broadly.

The announcement amplifies an earlier — and major — change in stance by API. The industry trade group in March said it supported a carbon-price policy, shifting from its earlier resistance to regulatory action on climate change. The move came after President Biden, a Democrat with ambitious goals to address emissions, took over the White House. API had lobbied against past attempts to impose carbon pricing in the United States.

The API template does not cover efforts to mitigate Scope 3 emissions – customers’ emissions. Still, API said its new template is only the first version. Updates could come later this year.  Companies that follow the template would likely do so in 2022, reporting 2021 data.

“Our work in this space is far from complete,” Padilla said. “Climate reporting is a complex and evolving scope of work.”