WhiteWater Midstream and MPLX LP announced Wednesday the completion of a substantial natural gas pipeline expansion in the Permian Basin that delivers gas to the Waha hub in Texas for production. 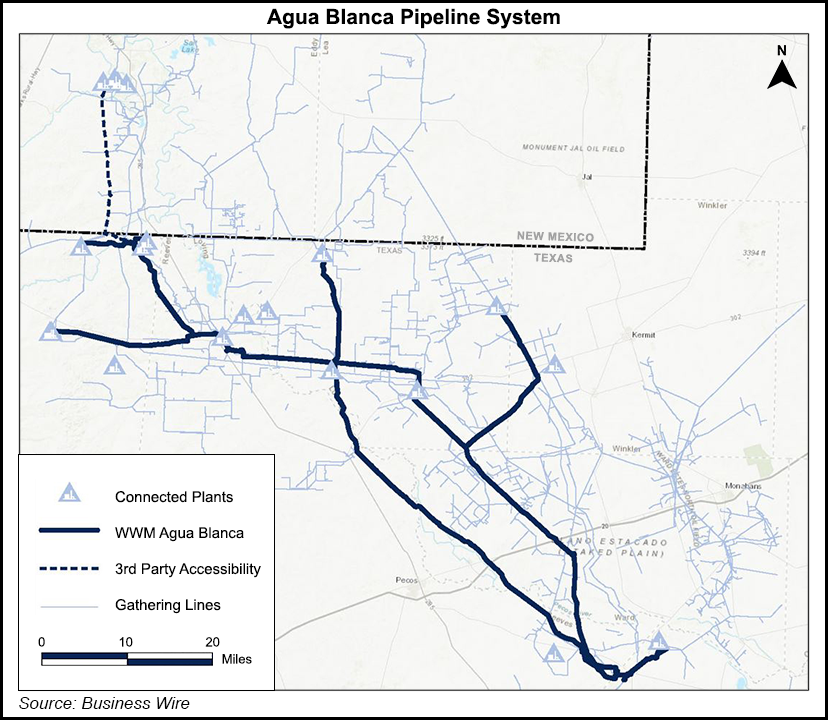 The 1.8 Bcf/d Agua Blanca expansion has entered commercial service and connects nearly 20 gas processing sites in the Delaware sub-basin of the Permian, WhiteWater said. It is transporting gas to Waha from Culberson, Loving, Reeves, Pecos, Winkler and Ward counties in Texas, as well as in Eddy and Lea counties in New Mexico.

The announcement comes on the heels of an Energy Information Administration (EIA) projection this month for cumulative natural gas production from the Permian and six other key U.S. onshore regions to fall by 472 MMcf/d from January to February, extending a downtrend that goes back to early 2020.

In its latest Drilling Productivity Report, EIA said it expects the Permian, Anadarko and Appalachian basins, as well as the Bakken, Eagle Ford, Haynesville and Niobrara formations, to produce 80.604 Bcf/d in February, down from 81.076 Bcf/d in January.

The Haynesville Shale is expected to grow output by 55 MMcf/d month/month (m/m) to 11.382 Bcf/d in February, but the other six regions, including the Permian, are on track to see declining production next month, according to the agency.

The trend coincides with a massive reduction in the U.S. rig count amid the demand destruction imposed by the coronavirus pandemic dating to March 2020.

With vaccination efforts beginning to gather momentum and economists forecasting U.S. economic growth this year alongside a projected dissipation of the pandemic, however, the U.S. natural gas rig count is climbing back, rising by three units to 88 for the week ended Jan. 22, according to Baker Hughes Co. (BKR) data.

Including the addition of two oil-directed rigs, the combined U.S. rig count rose five units to 378, still 416 rigs behind the 794 rigs active at this time last year, according to the BKR data. But the count has gradually recovered ground in recent months.

Meanwhile, plans call for Agua Blanca to connect to the Whistler natural gas pipeline under development by WhiteWater, MPLX and a joint venture between Infrastructure Partners and West Texas Gas Inc. The 42-inch diameter, 2 Bcf/d pipeline is expected to be in service in the second half of 2021.