The Oregon Department of Environmental Quality (DEQ) has approved SCS Global Services as an independent verifier for the state’s Clean Fuels Program (CFP), which encourages the use of alternative fuels, including renewable natural gas (RNG). 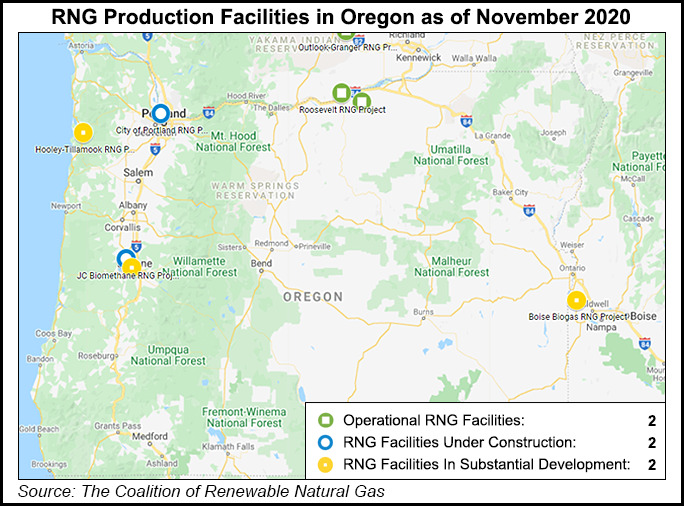 SCS is a global verification body for the LCFS and other low-carbon fuels programs. Oregon’s southern neighbor, California, is considered an LCFS pioneer.

Using incentives and requirements, the CFP attempts to motivate Oregonians to choose fuels other than gasoline or diesel. In addition to using more RNG, the use of electricity, ethanol, biodiesel and renewable diesel also is encouraged.

“As low carbon fuel markets expand into Washington, Canada and beyond, our clients can count on SCS to provide efficient and high-quality auditing services to help reduce compliance burden on their teams,” said Coye-Hugh.

Coye-Hugh told NGI that the state of Washington and Canada are working through a rulemaking process on how to implement their respective clean fuel regulations. He added that other states — Colorado, Iowa, New Mexico, Minnesota and Utah — are assessing low-carbon regulations too. Clusters of other states are contemplating regional programs.

One region, he said, would include Illinois, Minnesota and Wisconsin. Another would include several East Coast states: Connecticut, Delaware, Maine, Maryland, Massachusetts, New Hampshire, Rhode Island and Vermont.

“British Columbia has a longstanding carbon reduction program and carbon credit market,” Coye-Hugh said. “It should be noted that both Colombia and Brazil also have active low carbon mandates.”

“The program is specific to those selling transportation fuels into the state of Oregon,” said Coye-Hugh.

Beyond transportation, Oregon has taken an aggressive stance toward decarbonization in power generation. Earlier this year, the state enacted legislation that seeks to achieve 100% carbon-free electricity by 2040. The legislation effectively bans any new or repowered electric generation plants fueled by natural gas or other fossil fuels.

The U.S. Energy Information Administration in July noted that Oregon relies on natural gas for nearly 40% of its net electricity generation.