Natural gas futures surged for a third consecutive day against a backdrop of escalating global supply uncertainties after Russia cut off natural gas supplies to two European countries. With domestic fundamentals also tight this week, the May Nymex contract rolled off the board Wednesday at $7.267/MMBtu, up a massive 41.7 cents on the day. 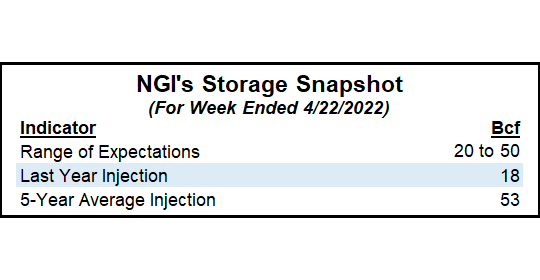 The June contract, which moves to the front of the Nymex curve on Thursday, climbed 36.1 cents to $7.339.

Volatility continued along the Nymex futures strip, with the expiring May contract bringing about a fiery buying spree in the final half hour into the close of Wednesday’s session. Solid 30.0-cent gains were seen throughout the remainder of the year and into February.

Though Russia’s halt of gas supplies to Poland and Bulgaria were not expected to have a significant impact on global balances, the potential for further cuts to European countries were keeping the market on its toes and fueling volatility.

NatGasWeather noted that the political turmoil and resulting surge in global gas prices were likely infiltrating U.S. trading. Domestically, however, there were no major changes in balances. Although the overnight weather data added a little demand, the latest Global Forecast System model gave it back – and then some.

NatGasWeather said strong demand was expected to continue through the weekend, with a mix of chilly late-season weather systems sweeping across the northern and eastern United States. The forecaster expects there to be enough demand the next 14 days to stall current supply deficits of 300 Bcf to keep the background state relatively bullish through May 10.

After expiration, the next round of government inventory data is expected to top traders’ interests. The Energy Information Administration (EIA) is scheduled to release its weekly storage report at 10:30 a.m. ET Thursday.

NatGasWeather expects the EIA to report a storage build of around 40 Bcf. This compares with a Bloomberg survey of 11 injection estimates ranging from 20 Bcf to 50 Bcf.

Last year, the EIA recorded an 18 Bcf injection in the same period, and the five-year average is a 53 Bcf build.

NatGasWeather pointed out that bulls continue to buy dips. “Bears won a few battles last week but are back to losing every one so far this week.”

At the same time, bulls continue to get a majority of the news and trends going their way, according to NatGasWeather. This includes yet another sizable drop in Lower 48 production.

On Wednesday, Wood Mackenzie reported a 1 Bcf-plus day/day decline in output. Of the total, roughly 760 MMcf/d appeared to be linked to pipeline maintenance in the Northeast. Nexus Gas Transmission LLC, Rover Pipeline LLC and Millennium Pipeline Co. LLC were reporting various pipeline work that limited gas flows in the region.

Over the summer, upside risk cannot be overstated. Tudor, Pickering, Holt & Co. (TPH) said imports into Europe already were showing signs of falling off, and the prospect of a further decline should “keep a bid in prices as we progress into the summer” and spur demand for liquefied natural gas (LNG) imports.

“Closer to home, with what we see as a continued elevated risk profile for European balances and thus firmness in pricing, we see the present dynamics continuing to support healthy” economic incentives for U.S. LNG exports, the TPH analysts said. In addition, there should be a “positive risk/reward skew for Henry Hub prices.”

Algonquin Citygate next-day gas shot up $3.405 day/day to average $10.200 for Thursday’s gas flow. Other New England hubs also posted price increases of a couple of dollars, while points along the Transcontinental Gas Pipeline Co. system softened between 10.0 and 15.0 cents on the day.

The National Weather Service (NWS) said rain and higher elevation snow were forecast to spread over much of northern New England amid a coastal storm slamming the region. Northern Maine, in particular, was expected to see the most impacts associated with snowfall, with up to eight inches possible.

The storm was forecast to be slow to exit, with breezy northwesterly winds and snow showers lingering through at least late Friday. Below-average temperatures were expected to stretch into the Midwest and northern Plains as well. Widespread highs were forecast to reach into the 40s and 50s, with lows dipping into the 20s and 30s, according to NWS.

Precipitation also was expected across the northern Plains and northern Rockies on Friday. Heavy snow was possible across the higher terrain of northwest Wyoming and western/central Montana, NWS said.

Further restrictions were possible if enough water is not conserved in the coming months, or if supply worsens, according to the MWD. The water restriction goes into effect June 1.As for gas prices, SoCal Border Avg. slipped 7.0 cents to $7.135, while prices in the northern part of the state climbed as much as 13.5 cents day/day to $7.970 at the PG&E Citygate.