American Gas Association (AGA) officials said they are prepared to work with whichever candidate is elected president of the United States, but their members are currently more engaged with state governors, legislatures and public utility commissions (PUC) on energy policies and completing various projects. 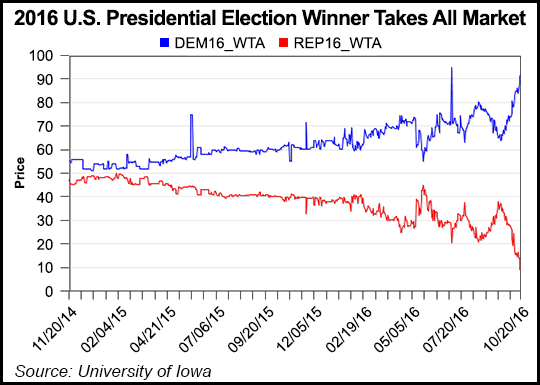 The association added that it is unlikely Congress will pass a comprehensive energy bill in the short term, and it warned that anti-fossil fuels protests are becoming more disruptive and threaten the regulatory process. It has also not yet taken a position on a carbon tax but is studying it.

More action at the state level

During a meeting with reporters Wednesday, George Lowe, AGA vice president for federal affairs, said the association was analyzing the policy positions of Democratic candidate Hillary Clinton and Republican Donald Trump. He said the AGA has also been working with campaign staff for both presidential candidates, as well as both parties’ national committees, “on positioning natural gas as a positive in a low carbon future and in the next administration.

“Look at where growth has been in the United States over the last decade; it’s really been in energy and production,” Lowe said. “We want to continue to make sure that we have access to natural gas for our customers, [and also] for the growing demand both in manufacturing and in transportation of that gas. We are looking at policies that will have positive impacts on that.”

Lowe said there are still some unknowns over what would come with either a Clinton or Trump administration.

“We have Senator Clinton’s record in the Senate and the statements she’s made,” Lowe said. “We then have the WikiLeaks documents, whether they’re true or not, adding to that [see Daily GPI, Oct. 18]. We have Trump who has said he is for an all-of-the-above energy policy [see Daily GPI, Sept. 23; May 26]. We’ve had [officials from both campaigns] here, and we continue to educate both.

“We’re taking a role of no matter who the next president is. We want to make sure that gas is an important ingredient in the next four years of administration.”

Lori Traweek, the association’s COO, added that “the reality is you can’t have a cleaner and more efficient energy policy without natural gas. We will work with either [candidate as president] and the governors to try to make sure that there is that understanding. Both candidates have suggested that there is an important role for natural gas.”

When asked which presidential candidate is favored by AGA’s members, Lowe said it depends.

“Part of it is where you are situated as a company,” he said. “Are you in an area that really leans left? Are you in the Midwest where you have a [Republican] legislature and governor?

“Hopefully we’ll have an energy bill this year, but the federal government, outside of tax policy, hasn’t driven energy policy regulation for the last 10 years — since the 2007 energy bill. Companies are focused on their PUCs, state legislatures, expansion projects and accelerated replacement programs in states. That’s where a lot of the action has happened.

“They expect us to work here in D.C. on regulations and legislation.”

“My former boss has worked very hard,” Lowe said. “I think the Senate committee as a whole did a fabulous job of taking a difficult issue and making a bipartisan bill that came out with a strong vote. I think that Chairman Upton in the House tried to do the same thing. They didn’t quite get there. They’re two very different bills, and given the short time frame it’s difficult. But I know staff from both the House and the Senate has been meeting regularly. They’re going to push for it.

“Given where [U.S. Sen. Maria Cantwell (D-WA), the committee’s ranking member] and Murkowski have been, I have hope. Is it a 50-50 chance? Probably not, but I still think there’s opportunity there for a piece of legislation to get through.”

“We would like to see a fully-staffed FERC commission and have it operating,” Lowe said. “It’s important to our members, but it’s important to the pipeline community as well. I don’t see it likely that you get two Republican commissioners appointed during a lame duck session, but the election outcome may dictate some choices by both parties.

“If a Supreme Court nominee goes through in December, that might open up some of the floodgates on some of the other nominations and you might be able to do some things. There’ll be political choices that both sides make after looking at what the landscape looks like on Nov. 9.”

Natural gas: On the pedestal and taking shots

Christopher McGill, AGA’s vice president for energy analysis and standards, said he believed anti-fossil fuel protests have been larger than in years past.

“Let’s remember that essentially energy policy in the United States for the past two presidential terms — Mr. Obama’s terms — has been based on climate change,” McGill said. “The environmental voice has been very loud, very clear, very organized, and it’s been growing. Is it more than in the past? It does seem like it.”

Richard Meyer, AGA’s manager for energy analysis and standards, added that a newfound abundance of natural gas has been the game changer for protests.

“The shale revolution has brought to the forefront the role of natural gas in the clean energy economy,” Meyer said. “As a past chairman of ours once put it, ‘When you’re up on the pedestal, you’re going to start taking shots.’ There has been a perceived growing opposition to a lot of different energy infrastructure projects — not just natural gas, but including such projects like natural gas pipelines. But I think it’s because of the more prominent role gas has played in our energy economy over the past five and 10 years.”

AGA COO Traweek added, “There has always been a very robust regulatory process to help ensure that decisions about infrastructure are in the best interest of whomever that pipeline is supposed to serve. And what we are seeing is a threat to that process.

“The industry has always worked closely with all of the stakeholders involved whenever they have considered an infrastructure process. That includes the regulatory agencies involved with ultimately approving the infrastructure. It results in, hopefully, a more transparent discussion around the need, and ensuring that there is an understanding as to why this infrastructure is being built.

“I think the challenge for many of the companies today is that they’re following the process, generally getting the permits they need, working with the stakeholders that they have traditionally had to work with — and yet their attempts to continue to work through this process and to then construct the pipeline are being interrupted. That really doesn’t serve anyone well. Jobs are lost or put on hold. It costs billions in some of these cases, for these pipelines to move along.

“We need a very robust, realistic conversation around energy choices, so that Americans can make informed decisions. And I’m not confident that is happening right now.”

Traweek said the legislative process “has served the country well over the years, and it would be in the best interest for us to continue to use the process. If there is some thought that there needs to be a different approach that FERC should be taking, then there’s a Natural Gas Act that can be used to try to expand or change how FERC looks at these projects. That’s all within the process that we’re certainly interested in being engaged in.”

Carbon tax: ‘We’re not sitting on our hands’

AGA officials bristled at the suggestion that they were not open to at least considering a carbon tax, which would put natural gas at a competitive advantage (see Daily GPI, Oct. 4).

“Our companies are not running away from the notion of being part of this carbon solution, and the solution is multi-faceted,” McGill said. “Might there be a cost associated with carbon in our energy markets going forward? There very well could be.”

McGill pointed to a report this month by the Energy Information Administration, which found carbon dioxide (CO2) emissions from the U.S. energy sector were the lowest since the first six months of 1991 (see Daily GPI, Oct. 13).

“We’re not waiting for anything,” he said. “We’ve been supplying the users of energy in this country with a lower carbon fuel. That’s been the story. That’s why we have lower carbon emissions that are on a level with [the first six months of 1991]. We’re not sitting on our hands.”

But Traweek said the issue of a carbon tax was a complex one requiring, among other things, an analysis into subsidies and other tax incentives.

“It’s a complete picture that we need, and our board is very interested in looking at what is in the best interest in terms of addressing how we can get to the lower carbon economy that we’re all interested in getting to. We have not yet concluded that a carbon tax is the best way, in and of itself…

“We just don’t know if a carbon tax is the best solution. Again, it’s got to be looked at in junction with subsidies, tax incentives, etc. We will have a position. We are working on it. But we’re not ready yet. We’re not saying no, we’re not saying yes.”