Heating demand could prove stronger this winter than last, given National Weather Service (NWS) forecasts for colder temperatures in northern markets. But robust production levels this fall should help the market meet demand and could help keep consumer prices from rising more than they already did this year. 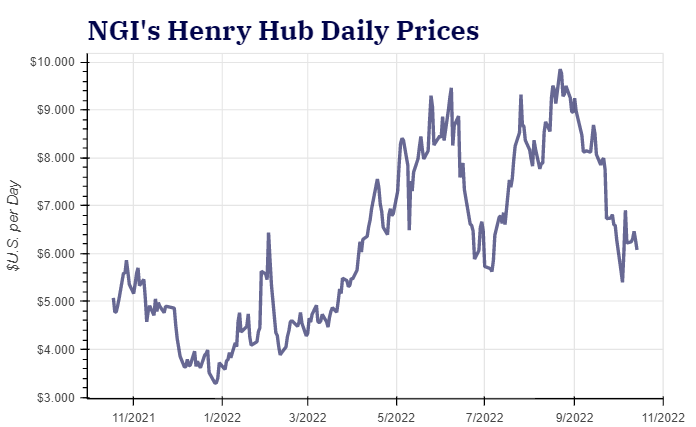 That assessment is according to the American Gas Association’s (AGA) winter outlook, delivered to reporters during a press briefing Monday. The AGA noted that production reached record levels in early October, following robust summer demand that sent both natural gas futures and cash prices to near 14-year highs around $9.00/MMBtu. Output topped 102 Bcf and reached an all-time high this month, according to Bloomberg data, and it has consistently held around 100 Bcf/d this fall.

Producers responded to the high summer prices and this, along with softer autumn demand, has brought supply closer in line with consumption, said AGA’s Brendan O’Brien, senior manager. Prices have declined notably in recent weeks and hovered around the $6.00 level in trading Monday.

With milder weather and strong output, the market has bolstered natural gas storage inventories over the past several weeks, alleviating widespread concerns over the summer about precariously low supplies.

The U.S. Energy Information Administration (EIA) most recently reported an injection of 125 Bcf natural gas into storage for the week ended Oct. 7. The build far outpaced the five-year average 82 Bcf injection and boosted inventories to 3,231 Bcf, or 221 Bcf (minus 6.4%) below the five-year average. The deficit to historic norms had held above 10% prior to a recent run of strong injections.

Looking ahead, analysts see the potential for another triple-digit build with this Thursday’s print. Early estimates submitted to Reuters for the week ended Oct. 14 averaged 104 Bcf. That compares with an injection of 91 Bcf during the comparable week in 2021 and a five-year average of 73 Bcf.

Still, Nymex futures prices this month are tracking more than 10% above the year-earlier level, and a cold winter could renew upward price pressure in coming months. The NWS expects overall 2022-2023 winter temperatures to be roughly in line with the 30-year average but colder than last winter. This, coupled with the undercurrent of strong domestic demand through much of this year as well as strong calls for American exports, could leave the 49% of American households that rely on natural gas to heat their homes paying higher bills.

For these households, AGA analysts said the natural gas share of total utilities costs this winter could increase to 48% from 37% a year earlier. Yet, they added, natural gas is still projected to be the least expensive residential heating source – with prices lower than electricity, propane and fuel oil.

EIA’s latest Winter Fuels Outlook, included in its updated Short-Term Energy Outlook this month, forecast a 28% year/year natural gas price increase for consumers this winter if temperatures during the season hover around average. Projected cost increases for natural gas are the largest among the household heating sources looked at in EIA’s modeling.

The agency, however, said American households that use natural gas to heat their homes could see prices soar 51% above year-earlier levels for October through March in a scenario where temperatures are 10% colder than baseline expectations.

Federal analysts have said that, in part, prices were propelled higher by fallout from Russia’s war in Ukraine. The European Union (EU) has staunchly opposed the war, levying multiple rounds of economic sanctions against the Kremlin. Russia has responded by cutting off the bulk of its gas supplies to the EU this year. That marked a major shift given that EU countries in prior years relied on Russia for about a third of their natural gas needs. Now, EU countries are calling for U.S. LNG to fill the void, adding to the American demand backdrop.

“The U.S. economy remains more resilient than most other developed markets as balance sheets in both the household and corporate sectors were exceptionally strong” over the past year “and cash levels remain high,” Rasco said.