The extraordinary tumult in the physical natural gas market rippled through the forward curves  during the trading week ended Wednesday as hubs throughout the country posted sizable week/week gains in both fixed and basis prices. 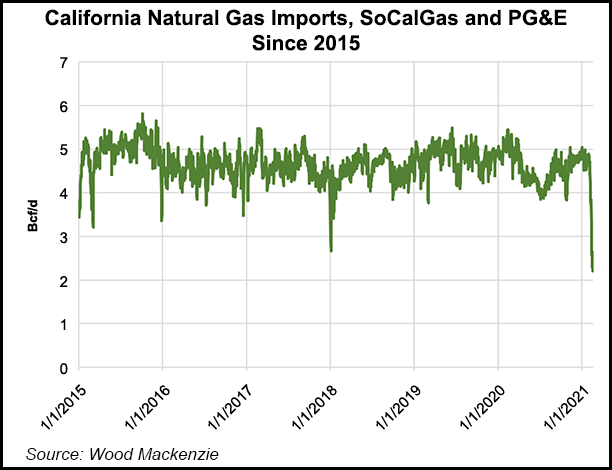 Prompt-month fixed prices in NGI’s Forward Look rallied by the double digits from coast to coast for the Feb. 11-17 period, while fixed prices for April also strengthened across the board, albeit to a lesser degree.

The higher forward prices coincided with a week of unprecedented conditions in the spot market, where day-ahead prices at numerous hubs surged into the hundreds of dollars — and in some cases over $1,000 — as a deep freeze in the Gulf Coast and Midcontinent disrupted operations for producers, pipelines, power generators and more.

Amid the astronomical short-term prices, March Nymex natural gas futures managed to break above $3.000/MMBtu during the week, but a weekly storage report that disappointed versus consensus predictions helped send prices retreating on Thursday.

The March contract ultimately settled at $3.082 on Thursday, off 13.7 cents from Wednesday’s close.

Tracking closely with the Nymex price action, Henry Hub gained 35 cents during the Feb. 11-17 period to trade at $3.222 as of Wednesday’s settlement, according to Forward Look data, setting the stage for strong gains throughout the market.

Considering how profoundly the Arctic blast rattled the physical market, the futures price action has been “benign” by comparison, analysts at EBW Analytics Group said in a recent note to clients.

“Fundamental pressure has been apparent for weeks,” the EBW analysts said. Despite the increase in the March contract since late January, “gains have lagged fundamental increases in demand.” The market “has remained complacent in its belief that fundamentals will suddenly loosen in the coming injection season.”

Still, a lot could depend on the extent and duration of production freeze-offs, according to the firm.

“The degree of freeze-offs has been very difficult to gauge, with pipeline flow models estimating 7-20 Bcf/d of supply outages,” the EBW analysts said. “If production is flowing again by early next week — with rising temperatures helping to resolve operational issues — a wave of downward price pressure is likely as upside risk is taken off the table.

“If outages turn out to be closer to the higher end of recent estimates and production remains offline for weeks, however, swelling upside pressure is possible for natural gas.”

Forward trading in the Gulf Coast and Midcontinent for the Feb. 11-17 period merely hinted at the duress experienced by energy markets in those regions. OGT, where day-ahead prices reached truly jaw-dropping levels, posted a $3.36 weekly increase for March, which traded at $6.241 as of Wednesday. Fixed prices at Houston Ship Channel shot up 53 cents week/week to average $3.426.

Over in West Texas, prompt-month fixed prices at Waha surged 66 cents for the period to $3.376.

Prognosticating the duration of production losses is difficult given that “there’s really not a good historical precedent” for the recent Arctic chill in the Midcontinent and Texas regions, RBN Energy LLC analyst Sheetal Nasta wrote in a recent blog post.

Nasta said it’s simply “never gotten quite this cold” in the region, and what’s more, there weren’t as many molecules being produced the last time the mercury dropped “anywhere close” to recent levels.

Nasta looked to a prolonged stretch of colder temperatures during the 2017/18 winter as a rough analog. At that time, an outbreak of Arctic temperatures, including in parts of Texas, coincided with a drop in Lower 48 production from around 80 Bcf/d to about 72 Bcf/d. This drop occurred over a roughly six-day period.

As temperatures climbed back above freezing, “about half the offline volumes returned within days,” Nasta said. “But it took another two weeks or so of sustained higher temperatures for volumes to reach 80 Bcf/d again.”

But again, that’s a less-than-perfect comparison to recent conditions.

“This time around, conditions appear to be more dire, and a lot more production is offline, volume-wise,” Nasta noted. “So it’s hard to draw any definitive conclusions, but the bottom line is that it’s likely to take weeks for production to recover, depending on weather and other factors.”

Some of the largest gains in forward trading during the Feb. 11-17 period occurred at hubs in the Rockies and along the West Coast. Prompt month fixed prices at Cheyenne Hub jumped 75 cents week/week to $3.570, while Northwest Sumas rallied 68 cents to $3.655. In California, Malin surged 53 cents week/week to $3.510, while PG&E Citygate added 60 cents to $4.455.

Hubs in Northern California and the Pacific Northwest were able to turn to Western Canadian supplies to help weather the recent storm of natural gas price spikes, according to analysts at Wood Mackenzie.

“PG&E can normally receive molecules from supply regions including the Permian, Rockies and Western Canada, but since this weather event began, it has essentially cut off all imports of molecules not from Western Canada,” Wood Mackenzie analyst Joseph Bernardi said in a recent note to clients.

“Imports on its Baja Path have dropped essentially to zero during this weather event after ranging from around 200-400 MMcf/d for the last month and a half.” This drop in flows “is logical considering these molecules are essentially all sourced from upstream areas which have been hit hardest by the cold weather and price spikes.”

The PG&E system has seen an overall “substantial reduction” in imports that has coincided with “monstrously large withdrawals” to compensate for the change in supply, Bernardi said.

Meanwhile, the Pacific Northwest has been “insulated from the worst of the price spikes,” the analyst said.

Flows along the boundary between the Rockies and the Pacific Northwest as of Wednesday remained reversed relative to the typical direction of molecules, with about 40 MMcf/d flowing into the Rockies in recent days versus a year-to-date average of around 400 MMcf/d headed in the opposite direction.

“This makes sense given that Opal cash climbed to $150,” while other supply points for Northwest Pipeline (NWPL), fed by Western Canadian supplies, have been printing far more tame day-ahead prices by comparison, Bernardi said.

NWPL has also been making “massive withdrawals” from the Jackson Prairie storage field of nearly 1 Bcf/d, according to Bernardi.

“It entered this weather event with an inventory just under 20 Bcf, which was well above previous-year norms, but now it is looking much more in line with the typical mid-February inventory from years past,” the analyst said.

As for storage trends across the entire Lower 48, the Energy Information Administration (EIA) on Thursday reported a 237 Bcf withdrawal from U.S. gas stocks for the week ending Feb. 12. Ahead of the report, major surveys projected a pull near 250 Bcf, while NGI projected a 286 Bcf pull.

While not as steep a pull as predicted, the 237 Bcf print was of a much larger magnitude than historical norms for the week. Last year, EIA recorded a 141 Bcf draw during the same week, while the five-year average withdrawal for the period stood at 142 Bcf.

Bespoke Weather Services, which had pegged the draw at 250 Bcf, said despite the much lower figure, it classifies the EIA print as “neutral”, impact-wise, as it believes the market is much more concerned with how long production, power generation and other infrastructure may be out of commission amid the deep freeze that paralyzed Texas.

“The sentiment was already in a more bearish mode prior to this number,” Bespoke said. “We do not feel this number really moves the needle definitively, given all the other unknowns out there currently.”