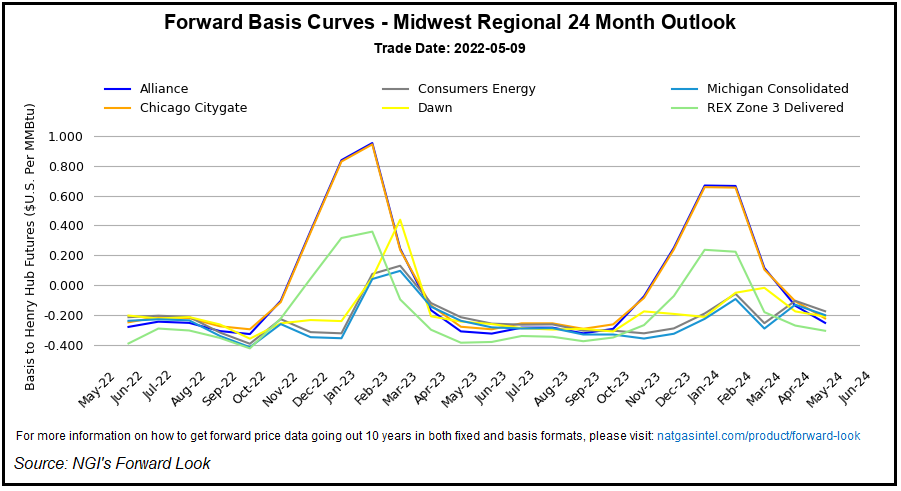 The June Nymex gas futures contract settled at $7.385/MMBtu, up 35.9 cents day/day. It marked a stark reversal after the prompt month dropped nearly $2.00 over the two prior regular sessions. July advanced 36.1 cents on Tuesday to $7.467.

A combination of threats to economic growth – soaring inflation and rising interest rates – and uncertainty imposed by the war in Ukraine raised the specter of recession and rattled equity and commodity markets in recent days. Signs of increased production also boosted the bear case for natural gas prices early this week.

Northeast production was most heavily impacted, with volumes down around 660 MMcf/d, Wood Mackenzie analyst Laura Munder said.  Broadly, “declines are in areas where there is some maintenance underway,” she said.

Producers have struggled to maintain steady levels of output this spring because of a combination of planned shoulder season maintenance and severe weather interruptions. The output challenges continue as summer cooling demand arrives and global calls for U.S. exports hold at elevated levels amid the war in Ukraine.

European countries are moving aggressively to sever ties with Russian natural gas in opposition to the Kremlin’s invasion of Ukraine. They are turning to the United States to help fill the void, fueling near-record levels of demand for American liquefied natural gas (LNG).

While Europe is working to wean itself from Russian supplies, it still counts on Kremlin-backed energy sources for about one-third of its natural gas needs heading into summer.

At the same time, southern markets in the United States were cranking air conditioners amid temperatures in the 90s and low 100s Tuesday. National Weather Service (NWS) data showed conditions ripening for notably strong cooling demand across Texas, the Southern Plains and swaths of the Southwest. This is expected to spread farther to the north and east.

As a result, U.S. utilities could struggle to bolster supplies during the current injection season.

The U.S. Energy Information Administration (EIA) last Thursday reported an injection of 77 Bcf natural gas into storage for the week ended April 29. The increase boosted inventories to 1,567 Bcf, but stocks remained far below the year-earlier level of 1,949 Bcf and the five-year average of 1,873 Bcf.

“As long as we have these deficits, storage is going to be a concern for a lot of people,” StoneX Financial Inc.’s Tom Saal, senior vice president of energy, told NGI.

EIA on Tuesday forecasted that with storage levels expected to lag behind the five-year average this summer, Henry Hub spot prices will spike to $8.59/MMBtu on average in the second half of this year.

Hubs across every region of the country posted steep losses.

While mild temperatures on the West Coast and parts of the East likely had an impact Tuesday, AccuWeather forecasts showed “scorching heat that has already been in place for several days in Texas” spreading into the Midwest and Northeast Wednesday and Thursday.

With highs near 100 in the South Central states, the 90s in parts of the Midwest and the 80s in portions of the Northeast, temperatures “will challenge record highs set as far back as the late 1800s in some cases” and drive robust cooling demand relative to norms for this time of year.

“A massive northward buckle in the jet stream has developed in response to a stalled storm off the East Coast,” AccuWeather meteorologist Brett Anderson said.

“As the jet stream buckle builds, heat will expand northeastward through the Mississippi Valley to parts of the Great Lakes region by midweek and then on to the St. Lawrence Valley in the Northeast later in the week,” Anderson explained.

Record highs are possible across a 2,000 mile-long stretch of the Lower 48 this week, AccuWeather said. This strip spans major markets from Houston and Dallas to Chicago and St. Louis. Even Canadian cities such as Ottawa and Montreal could endure intense heat by the weekend, the forecaster said.

Meanwhile, AccuWeather also said the storm expected to remain stalled off the East Coast into Wednesday could become the first subtropical depression or named system of the 2022 Atlantic hurricane season.

The firm said the storm’s strong winds were anticipated to continue into the middle of the week, with the highest gusts likely near coastal North Carolina.

“These same rough conditions will also spread hundreds of miles farther to the south along the Atlantic coast to South Carolina, Georgia and even northeastern Florida” as the week wears on, said AccuWeather meteorologist Alex Sosnowski.