The developer of the proposed Goldboro liquefied natural gas (LNG) project on Canada’s east coast has announced an evaluation of “strategic alternatives” for the $10 billion development after it missed a deadline to sanction the project June 30. 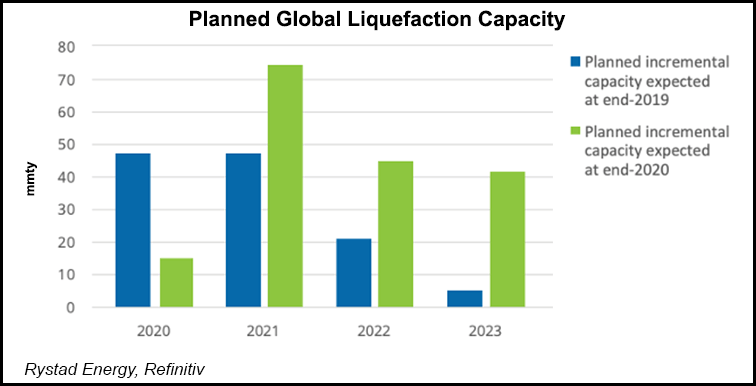 “We have not been able to meet all of the key conditions necessary to make a final investment decision (FID),” Pieridae Energy Ltd. CEO Alfred Sorensen said Friday. “Cost pressures and time constraints due to Covid-19 have made building the current version of the LNG project impractical.”

The miss comes as no surprise to the gas industry. Pieridae’s 2021 annual information filing for stock exchanges said it only satisfied four of 12 requirements in the contract that set the June 30 construction deadline with Goldboro LNG’s lone customer, Uniper SE.

The disclosed missing essentials included securing gas supplies, pipeline service contracts and project finance. Also still missing were a FID, terminal parts orders, and an engineering, procurement and construction contract. Goldboro delayed FID last year amid the Covid-19 outbreak, but had targeted the end of last month for a decision.

“We will now assess options and analyze strategic alternatives that could make an LNG project more compatible with the current environment,” Pieridae said.

The shelved version of the plan for a 1.3 Bcf/d LNG terminal in Nova Scotia dates back to 2012, when Pieridae predicted at least the first of two plant stages would be complete and start export deliveries in 2018.

When Goldboro LNG was born nine years ago, now-abandoned Atlantic offshore gas fields still produced and Canada’s eastern provinces had not yet adopted their current bans against developing land supplies with shale drilling and hydraulic fracturing.

The global gas market has also changed dramatically over the last decade. LNG production has increased among a wider variety of suppliers to match growing demand. The market has evolved as a result, with buyers seeking shorter terms under more flexible agreements tied to various indices. While demand is expected to outstrip capacity in the coming years, the market for new projects is extremely competitive.

There is currently 892.4 million tons of annual capacity in the pre-FID stage across the world, most of which is planned for the United States and Canada, according to the International Gas Union.