After spending much of the week in the red due to mild temperatures that had blanketed much of the country Feb. 11-15, most pricing hubs ended the week slightly higher as the first in a series of cold blasts was set to arrive this weekend. 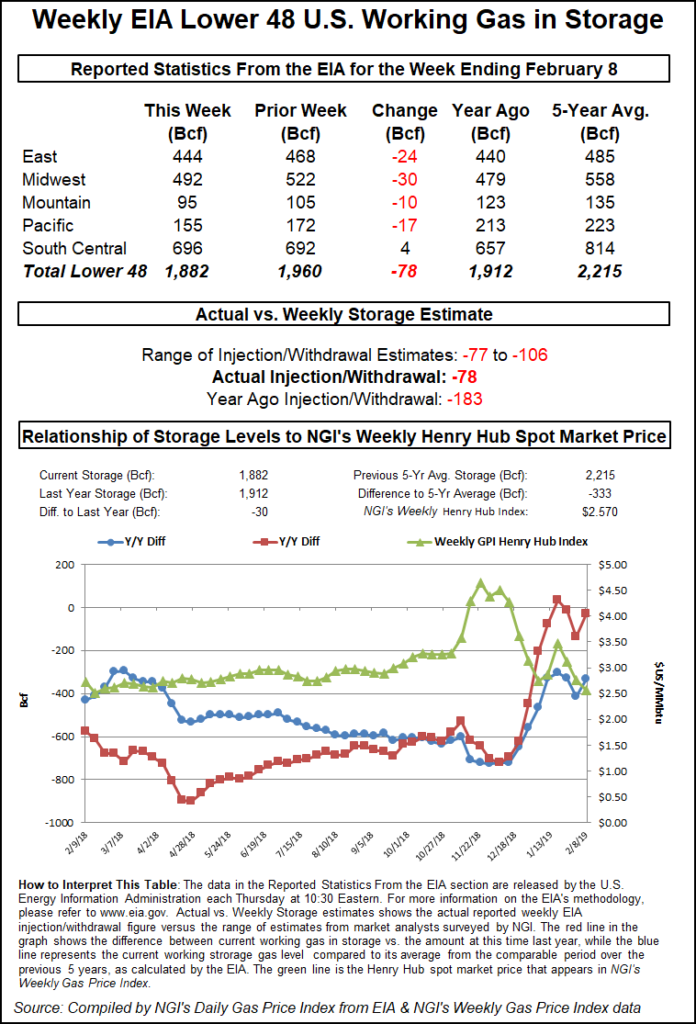 With temperatures forecast to drop as low as the minus 10s to 20s in the north and the 20s to 40s in the South, gains were strongest in the Northeast. But easing demand out West sent prices there crashing lower and pushed the NGI Weekly National Avg. down 30 cents to $3.225.

Pricing hubs across Appalachia rose less than a dime on the week, with Transco Leidy Line edging up to $2.51.

Transco Zone 5 in the Southeast saw prices pick up 7 cents to $2.71, and similar gains were seen across parts of Louisiana.

The Midwest also put up rather small increases of less than a dime despite the cold heading its way.

Out West, meanwhile, prices fell hard as although demand across the Pacific Northwest and California remains strong, it’s not quite at the record levels it had been the Feb. 4-8 week. Northwest Sumas plunged $4.68 to $19.535, and Opal tumbled about $3.70 to $7.115.

Two days of solid gains to start the Feb. 11-15 week gave natural gas bulls some hope as weather models show colder-than-normal weather lasting for the next few weeks. But with an improving supply picture, and temperatures likely to moderate soon thereafter, the Nymex futures strip ended the week little changed.

The Nymex March gas futures contract ultimately fell 1.7 cents during that period to $2.625, and April slipped a measly three-tenths of a cent to $2.656.

The latest weather data was pretty stable in showing cold lasting through the middle of the week, but then turning milder as strong high pressure was forecast to send daytime highs back into the 50s to 80s. The warmest weather was expected over the Southeast and Mid-Atlantic Coast and where demand just won’t be strong enough to impress, even though it’s expected to be quite cold over much of the rest of the country, according to NatGasWeather.

“Most of the weather data favors subfreezing air pushing back across the Ohio Valley and Northeast Feb. 28-March 3 in what currently appears like a plenty cold enough pattern with stronger-than-normal demand. But will it hold in the weather data through the weekend?” the firm said.

Both the American and European weather models continued to trend colder in Friday’s afternoon runs.

The Nymex front-month contract has continued to trade in a notably similar pattern to last year’s iteration through the first month and a half of the year, noted EBW Analytics. Then, as in now, concerns about late winter supply adequacy dissipated and deflated risk premiums, overwhelming bullish support from cold weather.

Indeed, after the Energy Information Administration’s latest storage inventory report, stocks were just 30 Bcf shy of last year’s levels although still more than 300 Bcf below the five-year average. And even with additional cold expected to widen deficits in the coming weeks, the market’s confidence in adequate supplies has grown.

Given similar structural market conditions with robust end-of-March inventory projections, it’s likely the Nymex front-month contract will continue to loosely trace last year’s trading pattern, according to EBW. “With late March and April weather unlikely to repeat the bullishness of 2018, it’s possible the front-month contract may test support at $2.50 — a threshold that has held for 30 months. If support breaks, futures prices could decline sharply,” EBW CEO Andy Weissman said.

Still, with break-even prices well below $2 in Appalachia and at around $2.30 in the Haynesville Shale, producers are likely to continue flowing gas as prices still have plenty of room to fall before shut-ins would be considered.

“Appalachia accounts for roughly one-third of all U.S. gas production, and current breakeven rates in that region are about $1 below current prices. Pure variable production costs are even lower than that,” said NGI’s Patrick Rau, director of strategy & research.

Furthermore, another significant portion of U.S. gas production is associated, namely out of the Permian Basin, and that will mostly flow regardless of price, excluding the relatively small amount that is flared. “Point being, prices are going to have to drop much, much lower than where they are now to see any kind of a production response. So the old adage that the cure for low prices is low prices may not hold, at least in the short run,” Rau said.

Production growth is one of three key supply and demand components the market will be closely watching during the next several months, according to Mobius Risk Group. Specifically, observers will be looking to see whether a resumed sequential growth trend emerges.

It will also begin sharpening its focus on scenarios for end-of-October inventory levels under various weather and pricing environments. Last winter’s end-of-winter deficits never recovered as an unusually hot summer kept demand strong and, thanks to a colder-than-normal November, deficits expanded to more than 700 Bcf.

Meanwhile, with liquefied natural gas (LNG) exports set to double this year, the market will closely watch the pace at which exports increase from the final train at Sabine Pass, whether Corpus Christi exports are baseload in nature and how quickly Cameron LNG is able to add trains, the Houston-based firm said.

“Speculation on these factors can be dwarfed by weather changes, particularly from March through mid-April. However, all three factors will be considered/scrutinized on a daily basis, with headlines in any of these areas potentially leading to reactionary price changes,” Mobius analysts said.

Spot gas prices were mostly higher Friday as the first in a series of storms was set to move across the country’s midsection during the holiday weekend followed by two more quickly behind it, driving up demand.

The storms were expected to hit population-dense areas including Chicago, Detroit, Pittsburgh, Baltimore, Philadelphia, New York City and Boston, according to AccuWeather. The first storm was forecast to be somewhat starved of moisture with gaps in precipitation across areas from the Midwest to the Northeast as a result, the firm said.

“Accumulations with this event spanning late Saturday to early Monday will generally range from a coating to a few inches,” AccuWeather senior meteorologist Alex Sosnowski said.

A wintry mix may extend across portions of West Virginia, northern Virginia, Maryland, Delaware and southern New Jersey to close out the weekend. By Monday morning, the snow was expected to wind down over New York and New England.

The big storm of the bunch was forecast to roll northeastward from the Gulf Coast on Tuesday and track along or just west of the Appalachians on Wednesday, then exit the Northeast on Thursday, according to AccuWeather.

“Since this storm will have a great deal of moisture available to it from the Gulf of Mexico and the Atlantic Ocean, a substantial amount of precipitation is likely,” Sosnowski said.

While heavy rain was likely to fall on parts of the lower Mississippi, Tennessee and Ohio valleys, southern Appalachians and the lower part of the mid-Atlantic, the storm was forecast to encounter progressively colder air to the north. As such, areas of ice, wintry mix and snow are in store, the forecaster said.

The storm and its moisture, similar to one that hit earlier this month, “will run into a dome of Arctic air over New England. High pressure associated with that Arctic air will put up some resistance and keep some areas below freezing until the very last gasp of the storm,” Sosnowski said.

Given the blast of frigid air, prices across the Northeast charged higher in Friday trading, which was for gas delivered through Tuesday. New England’s Algonquin Citygate jumped more than 80 cents to $3.855, and Transco Zone 6 NY rose 16.5 cents to $2.78.

Prices in Appalachia rose less than a dime, while Southeast markets were up as much as 12 cents.

Modest price shifts were seen at most other pricing locations across the country, outside of the West, which saw significant gains as the state continues to be battered by unusual winter storms at the same time that various supply restrictions were in place.

Interestingly, prices north of the border in Canada softened despite the ongoing frigid conditions in the country. NOVA/AECO C spot gas slipped a penny to C$2.845.

While AECO prices remained generally strong, “the problem is, one month of strong weather demand doesn’t fix things, much like the perfect Valentine’s date doesn’t make up for the prior 11 months of sub-par courtship,” TPH analysts said.

While the weather is helping draw down inventories and the price boost is certainly welcomed, TPH analysts expect to be market to be roughly balanced in 2019, “meaning it’s hard to see pricing being materially better than last year.”