Demand for U.S. petroleum spiked last week as consumption of gasoline and jet fuel jumped alongside a fading pandemic and increased travel. 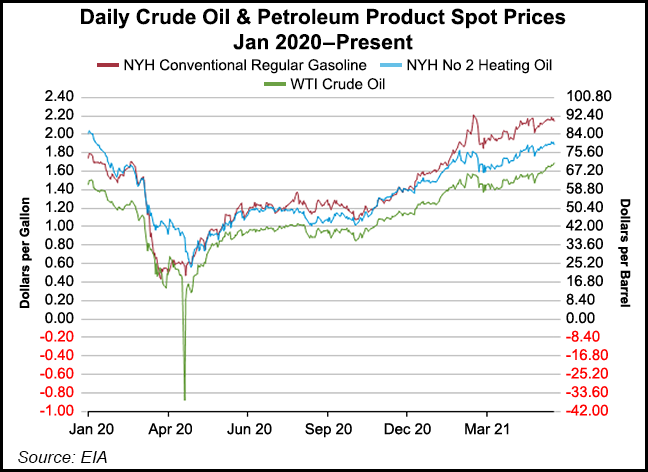 The U.S. Energy Information Administration (EIA) said Wednesday that demand during the week ended June 11 increased 16% week/week, with gasoline demand up 10%, jet fuel consumption ahead 22%, and demand for distillate fuel oil up 27%. Demand had declined the two previous weeks, though this followed gains over the course of the spring.

More than half of the U.S. population is fully vaccinated against the coronavirus and economic restrictions put in place to contain the pandemic have eased dramatically in recent weeks. Heavily populated states such as New York and California recently followed other states on paths to few restrictions on business activity and mobility.

The combination of stronger demand and gradually increasing output resulted in a decrease in stockpiles last week. U.S. commercial crude inventories, excluding those in the Strategic Petroleum Reserve, dropped by 7.4 million bbl week/week. At 466.7 million bbl, inventories are about 5% below the five-year average.

The drop provided added momentum to an ongoing rally in oil prices.

Brent crude, the international benchmark, approached $75/bbl in intraday trading – a more than two-year high — while West Texas Intermediate hovered above $72 in morning trading after the EIA report was released.

Mizuho Securities USA LLC’s Robert Yawger, director of energy futures, said production that remains below pre-pandemic levels in both the United States and globally has helped oil prices. But the “rally is more a demand phenomenon.”The Organization of Petroleum Exporting Countries and its oil-producing allies, aka OPEC-plus, are currently adding more than 2 million b/d into the global market. The process started in May and is scheduled to carry through July. The group, however, expects global oil demand to increase by about 6 million b/d in the second half of this year, exceeding supply growth.