The dust has settled after a busy week at FERC, and while several major natural gas pipeline projects have certainty moving forward, others face risks of delay as the Commission heads into a quorumless stretch. 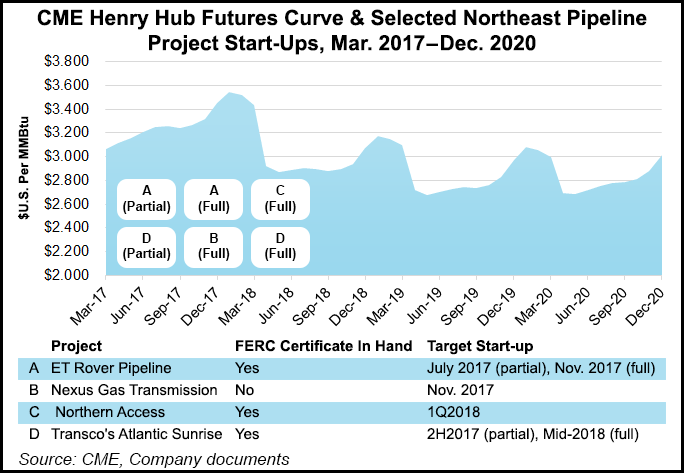 Now FERC has just two out of five sitting Commissioners, unable to issue NGA certificates or vote on other major decisions.

While Rover, Atlantic Sunrise and Northern Access all got the orders they sought, the Nexus Gas Transmission pipeline — another major project that had lobbied FERC for an order prior to Bay’s departure — will have to wait until the Commission regains its quorum. Nexus is backed by Spectra Energy Corp. and DTE Energy.

The lack of an order for Nexus had analysts at Tudor, Pickering, Holt & Co. opining that “without a FERC quorum for the near future, the construction start date for Nexus will likely be delayed. How far the project gets pushed back is unclear as President Trump will have to appoint at least one additional FERC Commissioner who will have to receive Senate approval.”

Spectra spokesman Creighton Welch told NGI Monday that “pending timely issuance of FERC’s certificate authority, we remain committed to placing the project in service in the fourth quarter of 2017, and are working with our contractors to ensure a safe and responsible construction plan is in place to achieve it.”

Nexus received its final environmental impact statement in late November and had been planning on an NGA certificate arriving sometime in 1Q2017, based on its publicly released timetable. The odds of that happening appear lower given the uncertainty over how quickly new appointees will be put in place to restore the Commission’s quorum.

Industry groups have been lobbying the Trump Administration to act quickly on new FERC appointments. The Process Gas Consumers Group and Electricity Consumers Resource Council on Monday, echoing earlier comments from the Interstate Natural Gas Association of America, urged the administration to “expeditiously nominate individuals to [FERC] who will safeguard the interests of large manufacturing employers that consume natural gas and electricity to make their products.”

Other pending NGA certificate applications could be negatively impacted by FERC’s quorumless stretch, according to analysts at ClearView Energy Partners.

The Mountain Valley Pipeline, the PennEast Pipeline and the Columbia Gas WB Xpress pipeline are among those that could be “adversely impacted” based on their respective environmental review timetables, the firm said.

Meanwhile, the natural gas projects that received certificates last week — a list that also includes Dominion Carolina’s Transco to Charleston Project and Tennessee Gas Pipe Line Co.’s Orion Project — should be clear to proceed with construction activities in the absence of a FERC quorum.

Rover, for one, on a tight deadline to begin tree-clearing activities to avoid impacting protected species along the pipeline route, wasted no time in seeking approval to get started.

In a Friday filing, Rover requested “the critical and immediate issuance of a Notice to Proceed with preconstruction felling of trees” and “the full release to begin all construction activities of all certificated facilities and related workspaces and contractor yards.” Energy Transfer is planning to bring the Rover project fully into service by November.

FERC spokeswoman Tamara Young-Allen told NGI Monday that the Office of Energy Projects has authority to review implementation plans and approve most construction-related activities once a certificate order has been issued.

Young-Allen said rehearing requests challenging NGA certificate orders will not halt construction activities for those projects. Under last week’s delegation order, FERC staff has authority to issue tolling orders on rehearing requests that will essentially “stop the statutory clock from ticking” until FERC regains its quorum and can act on those requests, she said.