What initially appeared to be a substantial retracement for natural gas futures ultimately turned out to be a much smaller pullback to start the week. After bouncing off a $2.497/MMBtu intraday low, the October Nymex gas futures contract settled Monday at $2.630, off only 2.7 cents from Friday’s close. November finished four-tenths of a cent higher at $2.920. 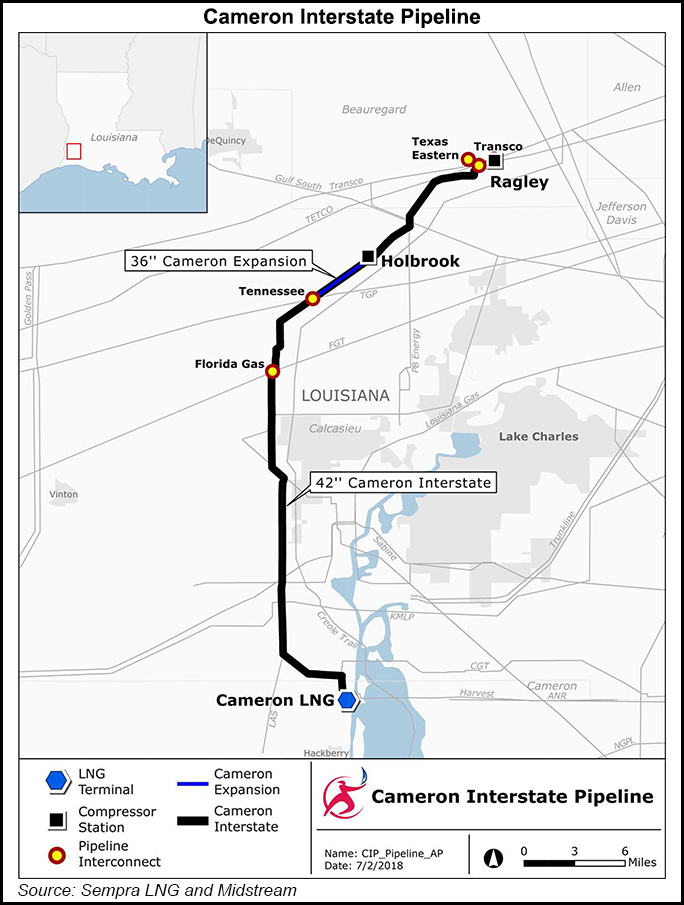 After the Sabine Pass and Cameron liquefied natural gas (LNG) terminals temporarily shut down operations ahead of Hurricane Laura, which made landfall in Cameron Parish, LA, in the wee hours of Thursday, the market became fixated on subsequent damage reports from the facilities and a timeline for a potential restart of operations.

On Monday, Sempra Energy LNG said preliminary, visual inspections of the Cameron terminal, the site of the proposed Port Arthur LNG project and its other infrastructure in the region indicate “minimal flooding and no catastrophic wind damage.”

However, power outages were extensive across Louisiana, with more than 300,000 still without power Monday, according to the Department of Energy. “Some of the hardest hit areas continue to have limited access due to flooding and/or debris.

“Full restorations for the most significantly damaged areas in western Louisiana could be extended, with full restoration for some portions of southwest Louisiana taking up to several weeks.”

Sempra’s foundation has pledged $500,000 toward Laura recovery and relief efforts in Southwest Louisiana and Southeast Texas. It aims to enlist partners and others in the energy industry across the region to raise an additional $1 million.

Cheniere Energy Inc. also reported “no significant damage” to the Sabine Pass terminal and company pipelines as a result of Laura, with the facility “performing as designed” through the storm. All employees are safe, and the company has begun executing its plan to restart LNG production at Sabine Pass. It also has announced a pledge of $1 million to local organizations supporting hurricane relief efforts.

With LNG demand for now remaining well off highs seen earlier in August, Monday’s weather forecast delivered another blow to a market hoping to regain momentum. Bespoke Weather Services said the forecast has cooled slightly since Friday, with a couple of shots of cooler air into the central United States and into parts of the South at times next week. As this occurs, heat is expected to rebuild in the western states, while the East could see some variability, though leaning on the above side of normal.

“Adding it all up, we find a rather tame pattern, nationally, for the first half of September,” said Bespoke, “quite different than what we saw last year, and also divergent from the average of the last few years, as September has tended to run hot.”

The forecaster sees some signs of a return to a more dominant above-normal temperature regime toward and beyond day 15, but normal temperatures are to be in a “rapidly declining state.” As such, unless heat is focused over the South, it becomes more difficult for weather to carry as much importance in the back half of September,” Bespoke said.

Meanwhile, production in the Gulf of Mexico is starting to be restored. On Monday, Genscape Inc. said total gas production remained at 0.4 Bcf/d, far below pre-Laura production rates of 1.8 Bcf/d. Much of the observed 0.3 Bcf/d increase in output from the weekend was observed on the Discovery, Mississippi Canyon and Transco facilities. While flows have resumed on Nautilus Pipeline Co., receipts from the Manta Ray and Anaconda facilities remain nearly 300 MMcf/d below normal, according to Genscape.

Since Laura’s landfall, many offshore pipelines reported no significant impacts that would otherwise limit operations. Kinetica Partners LLC, however, noted a leaking valve which has restricted its ability to deliver gas to onshore gas processing plants at the Targa Barracuda, Targa Seahawk and the Harvest White Lake facilities.

“While Kinetica has approved producers east of Cocodrie for flow, receipts on the pipeline remain near zero, approximately 70 MMcf/d less than pre-hurricane volumes,” said Genscape analyst Preston Fussee-Durham. “Furthermore, Garden Banks noted that personnel were able to fly out to the South Marsh Island 76 platform and that while the platform was undamaged, the communications remain down. As a result, the platform will remain unmanned and will be unavailable until communications are restored.”

Sea Robin also is not flowing any volumes, which is contrary to prior postings suggesting operations would resume as usual, according to Genscape. Destin Pipeline noted that the minimum flow requirement of 160 MMcf/d rate for the Pascagoula Gas Plant was expected to be achieved; however, as of Monday’s evening cycle, no volumes had been scheduled.

The lost production, at least in the near term, is likely to be offset by losses in demand, primarily at Sabine Pass and Cameron, according to EBW. However, this demand loss may not be permanent.

“Instead, most cargoes still are likely to be loaded, albeit with delays. Until the picture clarifies, though, gas prices could come under pressure.”

With forecasters calling for light demand early this week, spot gas prices headed lower Monday. Losses were most pronounced on the West Coast and in Texas, Louisiana and the Southeast, where increasing cloud cover was expected to reduce air conditioning needs throughout the region, according to NatGasWeather. Weather systems moving through the northern and central United States were set to keep daytime temperatures comfortable in the upper 60s to lower 80s.

National demand is expected to rebound beginning Wednesday as high pressure strengthens over the East, sending highs into the upper 80s to lower 90s. Heat was expected to continue in the western and southern states, NatGasWeather said.

Carthage led the move lower across Texas, plummeting 29.0 cents to $2.060, while West Texas points posted some of the country’s only gains. Waha jumped 10.5 cents to $1.570 after El Paso Natural Gas (EPNG) said it has resolved the Cornudas Station Unit 1B issue outlined in an April 2 force majeure and would increase capacity through the CORNHPW and WA2CORN constraints beginning Tuesday.

EPNG said the WAHANRTH and WINK constraints also would be restored to their seasonal limits. The repair of the Cornudas Transfer valve remains ongoing, and the capacity of the CORNTRN constraint is to remain reduced.