After a massive rise in the prior week, natural gas forwards softened a bit in the trading period ending July 7. Cooler weather and returning production contributed to a 7.0-cent decline in August prices, with small decreases extending through the remainder of summer (August-October), according to NGI’s Forward Look. 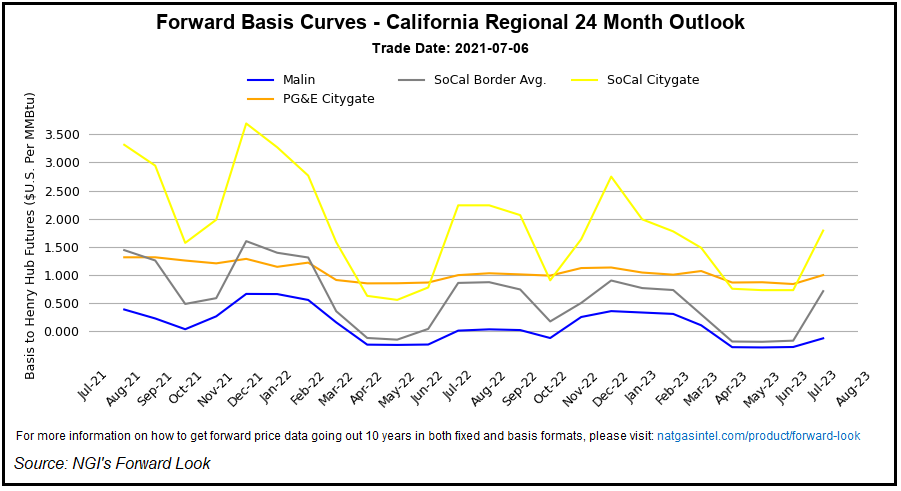 Winter forward prices also fell, but losses were small amid simmering concerns about the level of supplies in storage ahead of the peak demand season. The need to replenish what are expected to be lower-than-normal stocks drove prices higher for next summer (April-October). Gains of about a nickel were seen across North America, Forward Look data showed.

Coming off an intense week marked by oppressive heat and a sharp drop in production, as well as a nine-day price rally, the gas market was poised for a pullback. The cooler weather in the hardest hit regions last week combined with heavy rains along the Gulf Coast to squash demand and bring cash prices back to more normal levels.

This helped to soften Nymex futures and forwards alike, especially as long-range forecasts continued to show the most intense heat being concentrated in the West, rather than in the more important East and South Central regions. NatGasWeather said strong and hot upper high pressure is forecast to return in the coming days, pushing national demand back to strong levels.

That’s likely why Northeast locations put up smaller decreases, and even held steady, at the front of the forward curve.

Meanwhile, with long-range forecasts showing a continuation of soggy conditions along the Gulf Coast into late July, prices in the region declined.

Although heat is seen returning to the West, forecasts indicate conditions may not be as extreme as those experienced last week. With the worst of the heat appearing to be in the rearview mirror, losses were steep in California.

As for futures, some profit-taking after the nine-day rally finally sapped momentum along the Nymex strip. The return of Northeast production also weighed on prices.

A notice posted July 6 by Columbia Gas Transmission (TCO) indicated that the outage at the MarkWest Energy Partners LP Mobley gas processing plant in West Virginia that knocked off more than 2 Bcf of production had been resolved. EQM Midstream Partners LP also posted a notice that the downstream limitations through the Plasma Compressor Station resulting from the MarkWest event were lifted.

“Consequently, flows through Plasma-OVC have resumed flow levels near what was previously flowing before the incident,” Wood Mackenzie said in a note to clients. “Likewise, the impacted receipts onto TCO have jumped up to nearly previous levels as well.”

The downstream flow impacts on EQM also have resumed as well, it said.

However, the two-day dip came to an abrupt halt after the latest round of government storage data. The Energy Information Administration (EIA) reported a modest 16 Bcf injection into storage inventories for the week ending July 2.

The figure came in below the lowest of expectations, immediately sending Nymex futures screaming higher. The August Nymex contract, off early in Thursday’s session along with other global commodities, quickly jumped about a nickel after the EIA report.

The August Nymex futures contract ultimately settled at $3.688, up 9.2 cents from Wednesday’s close.

Bespoke Weather Services said the 16 Bcf figure was “quite strong,” reflective of the tightest supply/demand balances seen so far this summer. That said, the firm does not expect balances to stay this tight, as wind and production are higher this week.

“But is it enough? Our current data says no, as we need more material gains in production in order to get back on a trajectory that promotes sufficient storage levels as we head toward and then into the upcoming winter season,” Bespoke said.

Last year, the EIA recorded a 57 Bcf injection and the five-year average stands at 63 Bcf.

The reference week included the record heat in the Pacific Northwest, as well as hot weather on the East Coast. Meanwhile, after weeks of maintenance, liquefied natural gas (LNG) feed gas demand soared back above 11 Bcf on several days. Production also was lower in both the Northeast and the South Central region.

Broken down by region, the South Central stunned market observers with a rare withdrawal in both salt and nonsalt facilities, declining by a net 14 Bcf in the reference week.

Enelyst participants noted that the draw wasn’t because of heat in Texas. Instead, the reduced production combined with low wind generation likely led to the surprise draw. Enelyst managing director Het Shah said wind generation was “really messing with the power stack. The same level of coal isn’t there anymore to react when prices move higher.”

“That said, the draw underscores the markets’ tightness as LNG exports returned to the fray, with exports averaging around 11 Bcf/d, in line with our modeling, since returning from maintenance mid-June,” the TPH team said.

Elsewhere, the Midwest reported a 15 Bcf injection into storage, according to EIA. The East added 8 Bcf, and the Mountain region added 4 Bcf. Pacific inventories rose by 2 Bcf.

Wood Mackenzie, which had pegged the build at 23 Bcf, said compared to degree days and normal seasonality, the latest EIA figure appears tight by around 4 Bcf/d versus the prior five-year average. The surprisingly low injection was driven by an additional 18 degree days that added about 30 Bcf of weather demand. There also was a large week/week decline in nuclear/renewable generation.

As for what lies ahead, there is a likelihood that strong demand forecast for the 11- to 15-day period may carry over to the 16- to 20-day period, according to NatGasWeather. Hot high pressure is expected to produce widespread highs of mid-80s to 100s. “This should steadily march deficits towards 250 Bcf by late July,” the forecaster said.

Mobius Risk Group said there are 17 reporting periods left in the traditional injection season. In order for total inventory to approach 3.6 Tcf, a level many market participants predicted before the injection season began, the average weekly build would need to be near 60 Bcf from July through October.

“Clearly, there will be smaller builds in July and August versus the fall shoulder season, but the first full week of July is hinting at the potential for sub-40 Bcf builds for the balance of peak cooling season (July-Aug),” Mobius said. “If this proves to be the case, a cumulative build of 320 Bcf over an eight-week period would mean September and October injections would need to average almost 80 Bcf in order for 3.6 Tcf of inventory to be reached.”

The next reporting period is to include the Independence Day holiday, Mobius noted. As such, whatever build is reported would need to be adjusted before extrapolating to the remaining weeks in July and August.

At present, the likelihood of a sub-50 Bcf injection next Thursday appears to be high, according to Mobius. Monday’s weekly storage postings from various operators carry added weight because of the holiday.

“In the event a sub-40 Bcf build is reported, the market will have to quickly consider the implications of a cumulative July build of less than 150 Bcf.”