In 2013 AEP completed the corporate separation of its Ohio generating assets from its wires business in the state as part of Ohio’s transition to a competitive generation market. Akins said the company continues to diversify its generation fleet as it retires nearly 6,600 MW of coal-fueled generating capacity between now and 2016 due to environmental regulations and market conditions, and increases its use of natural gas, renewables and energy efficiency resources.

Between 2005 and 2013, AEP reduced its carbon dioxide emissions by 21%, exceeding President Barack Obama’s Climate Action Plan target of achieving a 17% reduction by 2020. In addition, AEP’s emissions of sulfur dioxide and nitrogen oxide each have been reduced by more than 80% since 1990, and mercury emissions have declined by nearly 60% since 2001.

“The strategic investments we’re making in infrastructure and system improvements to benefit customers, along with our focus on cost discipline, will allow us to continue achieving strong financial results and a healthy dividend for our shareholders,” Akins said. “More than ever, customers recognize the importance of a reliable supply of electricity, and we are committed to refining and improving the grid so we can continue to meet their needs and expectations in the future.”

Akins said Tuesday that AEP plans to invest about $4 billion per year from 2014 through 2016, with transmission investment being a priority. In 2013 the company completed the largest set of transmission projects in its history, the majority of which were in support of competitive renewable energy zones for wind power in Texas, and the retirement of generation in the PJM Interconnection. AEP said it will continue to invest more than $1.5 billion per year in transmission infrastructure projects.

“Transmission presents a huge growth opportunity for AEP, especially as our nation manages the significant generation retirements occurring over the next two years and seeks to redesign the transmission system to support the changing generation mix and optimize the grid,” Akins said.

As one of the largest electric utilities in the United States, AEP delivers electricity to more than 5.3 million customers in 11 states and owns nearly 38,000 MW of generating capacity in the U.S. The company’s 40,000-mile transmission network covers 38 eastern and central U.S. states and eastern Canada. 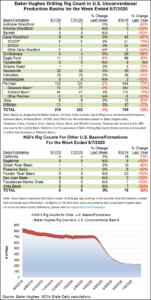 Yet another round of losses in the oil patch saw the U.S. rig count slide four units to 247 for the week ended Friday (Aug. 7), according to updated numbers from Baker Hughes Co. (BKR). Total oil-directed rigs in the United States fell four units to 176, while natural gas-directed rigs held steady at 69.…