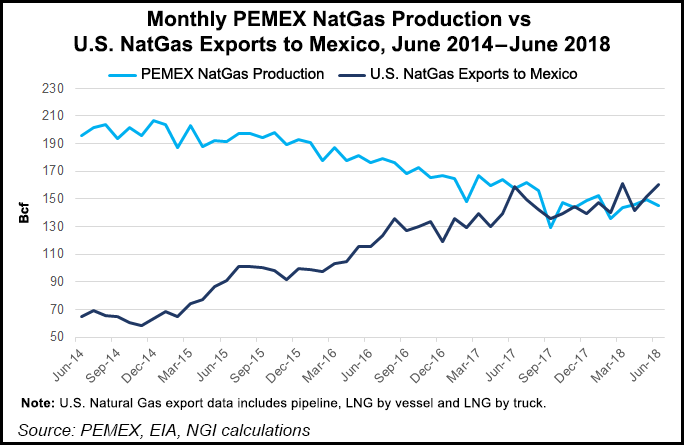 One way to do this could be to offer fiscal incentives for gas-focused upstream projects, said RuÃ­z, who reportedly is the top pick to lead Pemex’s exploration and production (E&P) division after LÃ³pez Obrador takes office on Dec. 1.

In a departure from the president-elect, who said recently he would not allow hydraulic fracturing (fracking) when he takes office, RuÃ­z said that unconventional gas exploration and development should indeed be pursued.

Mexico enforces stringent regulations with regard to the storage and reuse of produced, i.e. frack, water in E&P operations. The country’s Agencia de Seguridad, EnergÃ­a y Ambiente (ASEA), the environmental protection department for the oil and gas sector, also recently published draft regulations to curb methane leaks by the industry.

Mexico’s upstream Round 3.3, which is scheduled for February but may be postponed by LÃ³pez Obrador, includes shale and tight gas blocks in the Burgos Basin, which is the primary source of non-associated gas in the country. The basin’s unconventional gas resource potential is thought to rival that of the Eagle Ford Shale in South Texas.

Pemex in March said it had signed an integrated services contract with U.S.-based independent producer Lewis Energy Group, to invest $617 million in a gas project targeting the Mexican portion of the Eagle Ford.

Pemex and Lewis expect gas production from the project to reach 117 MMcf/d by 2021, or about 2.3% of Mexico’s current total production.

Authorities are seeking bids for a project to store 10 MMcf underground, with the larger goal of having 45 MMcf of storage capacity by 2029, or enough to meet national demand during a five-day supply interruption.

“This goal, ambitious for Mexico, is in line with storage averages that already exist in the world (such as in the European Union), although there the volumes are greater, with mandatory storage of up to 30 days’ worth,” local think tank Pulso EnergÃ©tico said in a recent note.

According to the official timeline published by gas control center Cenagas and national hydrocarbons commission CNH, the public consult phase for the tender ended on Sept. 10, with the process expected to conclude within six months.

RuÃ­z said Mexico’s massive buildout of gas pipeline infrastructure will continue as well, citing pipeline and storage projects as “a great place for private investment” under the new regime.

He did not address whether LÃ³pez Obrador will support continued liberalization measures in the gas segment, such as the release of most of the Pemex gas marketing contracts to private sector shippers.

However, Ruiz opposes the asymmetrical regulations imposed on Pemex through current President Enrique PeÃ±a Nieto’s 2013 constitutional energy reform, which include the contract release program and open access for third parties to transport capacity on the national pipeline network.

Three gas pipeline projects requiring $2.25 billion of combined investment have begun commercial operation this year, with another seven requiring combined investment of $7.4 billion scheduled to come online by year-end, according to a report by energy ministry Sener. All gas pipeline projects that have started up since 2013 have been developed by the private sector.