Politics will be dictating much of what happens to the nation’s natural gas supplies in 2006 and beyond, according to veteran industry analyst John Olson. For instance, politics — rather than economics — will largely dictate whether the country gets a gas pipeline from Alaska, whether the Arctic National Wildlife Refuge is opened to exploration, and whether there will be LNG receipt terminals on either the West or East coasts or both.

As for producers growing production from the Lower 48, Olson wishes the industry luck. “It will be a very pleasant surprise if they do move the needle. Politics again are perhaps trumping economic realities.

“I think 2006 is going to be a very interesting year because the country at large needs to rethink its undying animosity to oil and gas drilling activity in the United States, not to mention ANWR in Alaska,” Olson told Daily GPI.

In the international arena, at least where LNG is concerned, America’s gas supply future also will be dictated by the country’s competitiveness in the global LNG market. Olson notes that many of this year’s LNG spot cargoes have gone to the United Kingdom or to Spain, where cold weather has driven up gas demand. “I’m not sure how many cargoes this year have been spot, but there were measurably more than there were last year.”

Obviously, industry participants can look forward to plenty more news about LNG in 2006. “I think the industry has become a lot more sensitive to LNG because we are progressively depending on the kindness of strangers,” Olson said. “Virtually all of our foreseeable demand growth from what is now about 22 to 23 trillion cubic feet a year to 25 or 26 [Tcf] in the next 10 years or so, all of the growth will be coming from LNG imports.”

As is often the case, In the case of the major producers who have left the United States for more prolific plays in more exploration-friendly parts of the world, “it would be very hard for people like them to reinvest themselves in the Lower 48 unless they made some sizable acquisitions.”

And Olson is predicting more consolidation in the upstream in 2006. Much more, in fact, “as much due to the survival instincts of the bigger and bigger fish. You’ll see the minnows get swallowed, and it will go right up the food chain. The latest example being Burlington Resources being taken over by ConocoPhillips.”

And did ConocoPhillips pay to much? “I think at the end of the day they probably paid a little bit of a premium in today’s market, but in two or three year’s time you won’t hear a peep,” said Olson.

Consolidation of midstream assets also will continue, Olson predicted, as more continue to be rolled into master limited partnerships (MLPs). He noted that the asset base of the 11 leading pipeline MLPs has gone from $14 billion in 2000 to about $43 billion today. “Virtually all of that growth came from acquisitions…. It’s a seller’s market where you have too much money chasing too few quality assets. I think it will be going on until the last dog dies.”

As for consolidation among utilities, there may be some more. PUHCA was not a big impediment to deals, Olson said. But the acquire-or-be-acquired strategy, “I’m not sure that makes any economic sense,” Olson said.

This year’s high gas prices have been a boon to both coal and nuclear generation. “I think we will see more rhetoric about both, together with some new construction of coal-fired power plants.” However, Olson noted that coal plant construction takes three to five years, and any new nuclear plant is at least 10 years off. Even if new coal and nuclear generation could be put in service tomorrow, it would do little to relieve the country’s need for more natural gas and oil.

Olson, sees 2005 as a year of trade-offs. “The trade-off occurred in that the exploration and production business suddenly struck gold in higher prices, and the industrial demand started to dry up in direct proportion to the rising gas prices,” Olson told Daily GPI. “The next trade-off came with the fact that there was no net demand destruction. While the industrial demand was going down, the power plant load, especially independent power plants, was going up.”

Olson will be a featured speaker at GasMart, to be held in Denver May 3-5. For more information, visit www.gasmart.com. 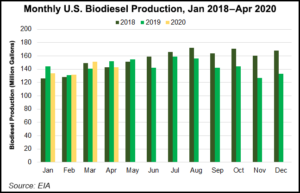 The U.S. Department of Energy (DOE) announced Thursday its selection of seven research projects to receive funding for the development and acceleration of the adoption of performance-advantaged biofuel blendstocks.  The projects, totaling $1.94 million in research expenses, will expand research on fuels derived from renewable feedstocks, which could deliver efficient energy without high emissions. The…