Increased activity in the Permian Basin and Eagle Ford Shale helped push the U.S. rig count nine units higher to 512 during the week ended Friday (Sept. 17), according to the latest data from Baker Hughes Co. (BKR). 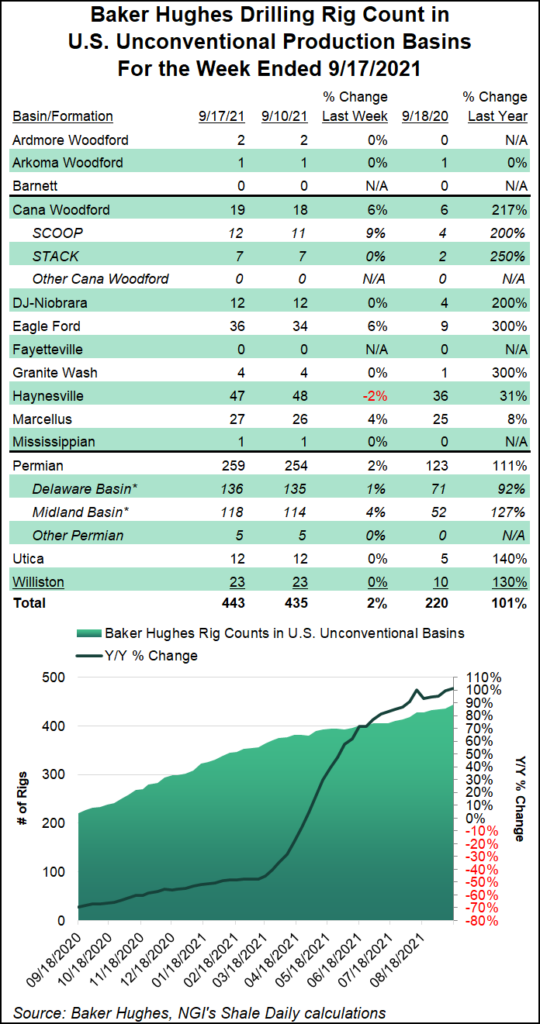 A 10-rig increase in oil-directed drilling offset a one-rig decline in natural gas-directed rigs in the United States for the period. The 512 combined active U.S. rigs as of Friday compares with 255 rigs running in the year-ago period, according to the BKR numbers, which are based partly on data from Enverus.

Land drilling increased by eight units overall for the week, while one rig was added in inland waters. In the wake of Hurricane Ida, the Gulf of Mexico rig count continued to languish at only four rigs, a fraction of pre-storm levels. Five horizontal rigs were added domestically, along with three vertical rigs and one directional unit, according to BKR.

The Canadian rig count, meanwhile, climbed 11 units week/week to end at 154, including increases of eight oil-directed rigs and three natural gas-directed rigs. The Canadian count finished the period 90 rigs ahead of its year-ago total of 64.

Broken down by major play, the Permian posted the largest week/week change, picking up five rigs to up its tally to 259, more than double the 123 rigs running there at this time last year. The Eagle Ford picked up two rigs during the week, while the Cana Woodford and Marcellus Shale each added one. The gassy Haynesville Shale, meanwhile, dropped one rig from its total to close out the week with 47 active rigs.

In the state-by-state breakdown, Texas picked up four rigs week/week, while Oklahoma added three and New Mexico added two. Pennsylvania posted a net increase of one rig for the period, while Utah and West Virginia each dropped one rig overall, according to BKR.

The International Energy Agency (IEA) said recently it expects continued tightening of the global oil market this month, driven by factors on both the supply and demand sides of the equation. The global energy watchdog said it now expects global oil demand to rise by 5.2 million b/d this year, and by 3.2 million b/d in 2022.