The U.S. Coast Guard (USCG) has ended patrols and operations for the final three shoreline miles in Louisiana, bringing to a close the four-year active cleanup of the Gulf Coast following the Macondo well blowout in April 2010, BP plc officials said. Operations ended in Florida, Alabama and Mississippi in June 2013. 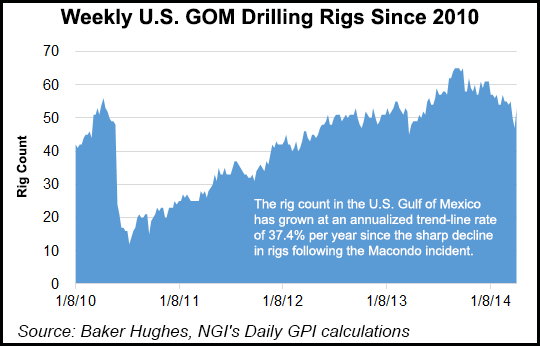 “Reaching this milestone is the result of the extraordinary efforts of thousands of people from BP, local communities, government agencies, and academic institutions working together,” said BP America President John Minge.

The blowout destroyed the Deepwater Horizon platform and killed 11 men. The U.S. government has calculated that the total amount of oil spilled from the blown well was 4.9 million bbl, which would set a Clean Water Act penalty of as much as $18 billion. BP argues that the government estimates are too high, claiming that it captured 810,000 bbl from the flowing well at the time of the incident, which would reduce the penalty, depending on gross negligence (see Daily GPI, July 2, 2013).

“Immediately following the Deepwater Horizon accident, BP committed to cleaning the shoreline and supporting the Gulf’s economic and environmental recovery. Completing active cleanup is further indication that we are keeping that commitment.”

Although active cleanup has ended, the entire area of response is subject to the National Response Center process. USCG personnel remain positioned to investigate future reports of oil-based material.

“BP has spent more than $14 billion and more than 70 million personnel hours on response and cleanup activities,” noted BP Executive Vice President Laura Folse, who handles response and environmental restoration. “Even though active cleanup has ended, we will keep resources in place to respond quickly at the Coast Guard’s direction if potential Macondo oil is identified and requires removal.”

Aerial reconnaissance flights were flown across close to 14,000 miles of shoreline. Nearly 4,400 miles were ground-surveyed, with teams identifying 1,104 miles that experienced some level of oiling and 778 miles that required some measure of cleaning. For example, in Louisiana, more than 40,000 holes and pits were excavated across seven barrier islands. Three percent of the 16,000 auger holes had oiling levels that required cleanup and less than 2% of the 24,000-plus pits had heavy or moderate oiling. More than 100,000 tons of material was collected from the cleanup efforts.

BP, which has paid billions in damages to date and may pay billions more under Clean Water Act penalties and additional settlements, spent an estimated $1 billion to support the assessment process and to evaluate injuries and restoration options. Potential agreements have been reached with trustees on 54 early restoration projects totaling about $698 million; 10 projects are underway. In addition, BP has paid about $13 billion in claims, advances and civil settlements for tourism promotion, seafood testing and marketing, and behavioral health.

In related news, oilfield services provider Crescent Drilling and Production claimed in a lawsuit Monday that BP should be held liable under the federal Oil Pollution Act because of lost business following the spill. The devastating spill and subsequent six-month moratorium on deepwater drilling “have caused and will continue to cause a loss of revenue for Crescent as it provides support services for those engaged in offshore deepwater drilling activities,” it stated in a complaint filed in the U.S. District Court for the Eastern District of Louisiana. The district court is handling the multi-district litigation cases.

The rig count in the U.S. Gulf of Mexico (GOM) fell off dramatically in the wake of drilling restrictions following the Macondo incident, but it has rebounded in the years since, according to Baker Hughes data. After dropping from 48 to 24 rigs in early June 2010, and falling to a subsequent low of just 12 rigs on July 16, 2010, the GOM rig count grew to a recent high of 65 rigs in early October 2013, before settling back to its current level of 53. Overall, the GOM rig count has grown at an annualized rate of 37.4% per year since the Macondo-induced collapse. BP now has a record nine rigs in the deepwater GOM.