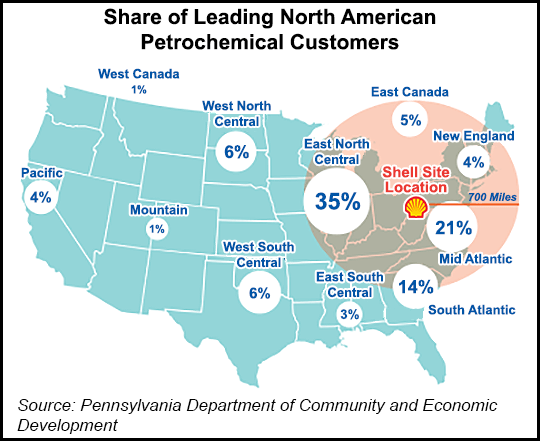 ACC’s analysis projects that nearly $36 billion in capital investment would be generated in Ohio, Pennsylvania, West Virginia and Kentucky if five ethane crackers and two propane dehydrogenation facilities are built in the region.

CEO Cal Dooley joined U.S. Sens. Shelley Moore Capito and Joe Manchin, along with Rep. David McKinley of West Virginia on Thursday to unveil the study’s findings during a call with reporters. He said it would take about $10 billion to build the kind of ethane storage hub and pipeline network that would fully capture the petrochemical investment modeled in the study.

“We have a once in a lifetime opportunity to further expand the U.S. chemical manufacturing base by capitalizing on the tremendous resources of wet gas in the Marcellus and Utica as well as the Rogersville shale formations,” Dooley said.

The study was released just days after Capito, Manchin and Sen. Rob Portman of Ohio introduced legislation that would require federal agencies to study the feasibility of an underground ethane storage and distribution hub in Appalachia. According to the lawmakers, the study would help inform future infrastructure projects, demonstrate the economic potential of such a hub and help attract private investment funds.

“We want to keep the value of the resource in our region,” Capito said. “We want to help the manufacturing, power and energy sectors in our states. And we want to start revitalizing our chemicals industry and plastics industry in and around the Marcellus Shale.

A unit of Royal Dutch Shell plc is currently building a multi-billion dollar ethane cracker in Western Pennsylvania that’s expected to come online next decade. Four other similar facilities have been proposed for the region as well.

Manchin called the possibility of further petrochemical development in a part of the country where chemical manufacturing already generates billions of dollars in economic output a “game changer.” He said he would be working to encourage all three states to invest more in attracting a storage hub.

McKinley said he plans to introduce similar legislation in the U.S. House on Friday. He’s also had a conversation with President Trump about the matter and said the administration’s desire for infrastructure modernization legislation aligns well with the bipartisan storage push. McKinley also wants Kentucky included in the mix to help any future legislation pass the Senate, where the proposed study has failed before as an amendment.

The Appalachian Basin is home to abundant natural gas storage. It’s long been a staging area to move gas to the Northeast. But its NGL storage and pipeline options are inadequate.

A Pennsylvania-commissioned study released earlier this year found that the Marcellus and Utica shales hold enough ethane to accommodate up to four more ethylene crackers in addition to Shell’s. But that analysis also estimated that the region needs 3.5-7 million bbl of liquids storage to foster more development. It currently has none. Mountaineer NGL Storage LLC has plans for a 2 million bbl underground facility in southeast Ohio.

As the public sector continues to explore its options, a study is already underway by private industry players, including Antero Resources Corp., American Electric Power Co., Blue Racer Midstream LLC, Chevron Corp. and XTO Energy Inc., among several others, to investigate NGL storage potential in the basin. The companies came together last year to match a $100,000 grant from the Claude Worthington Benedum Foundation.

The ACC noted Thursday that public sector efforts will continue to be extremely important for attracting capital investment. “Policymakers can help by affirming that NGL storage and distribution projects are eligible for existing private-public financing programs,” Dooley said.

He added that Appalachia has “distinct benefits” that could make it a “major petrochemical and plastic resin-producing zone.” Storage hub locations are typically underground in salt domes, natural gas caverns or other formations. Hubs include pipelines from source locations to manufacturers along with other equipment to move materials through a network.

Some have suggested that an Appalachian hub could also include a financial exchange structure with price-setting based on regional supply and demand, such as Mont Belvieu, TX. The Gulf Coast generates about two-thirds of North America’s ethylene output.

More liquids storage has been a constant refrain since Shell announced its final investment decision last year for the Pennsylvania cracker, siting cost-advantaged feedstock, market proximity and strong local support. The Appalachian Storage Hub Conference also has been organized for June 15 in Canonsburg to further discuss the matter.

The ACC found that the economic benefits of a petrochemical buildout could be substantial. By 2025, the study said, Ohio, Pennsylvania, West Virginia and Kentucky could see 100,000 new jobs and an additional $2.9 billion in new federal, state and local tax revenue annually.