Dallas-based Pioneer expects to use the proceeds of the sale for general corporate purposes, including share repurchases, debt reduction and possibly additional bolt-on acquisitions in existing operating areas. The transaction is not expected to have a significant impact on fourth quarter after-tax earnings, the company said.

“We thank all of our Canadian employees for the value they have created for our shareholders since we acquired these assets 10 years ago. The sale of these assets now will allow us to effectively redeploy capital and enhance our financial flexibility,” said Pioneer CEO Scott D. Sheffield.

The sale was announced just four months after Pioneer said a new natural gas field in northern Alberta was producing at a gross rate of 18 MMcf/d from three wells (see Daily GPI, April 4). Total gas resource potential from the Alberta prospect was estimated to be 50-80 Bcf.

TAQA, which was founded in Abu Dhabi in 2005, is a global energy company with operations in power generation, desalination, renewables, upstream oil/gas, pipelines, gas storage and liquefied natural gas. TAQA subsidiaries provide more than 85% of the electricity and water in the Emirate of Abu Dhabi.

In May, Pogo Producing Co. sold Canadian subsidiary Northrock Resources Ltd. to TAQA for $2 billion in cash (see Power Market Today, May 30). Northrock’s properties, which currently produce 29,000 boe/d, are located primarily in Alberta, Saskatchewan and the Northwest Territories. At year-end 2006 Northrock had 706 Bcfe of estimated proved reserves, with 51% of the output and 55% of the reserves in oil. When the Pogo acquisition was announced, TAQA CEO Peter E. Barker-Homek said his company viewed the Northrock deal “as a solid base for further investments and growth in Canada.” 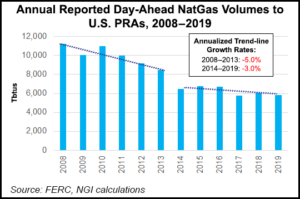