Natural gas futures on Monday tumbled for a fourth straight day amid mild weather, demand uncertainty and steady production. The April Nymex contract settled at $2.664/MMBtu, down 3.7 cents day/day. May fell 4.1 cents to $2.698. 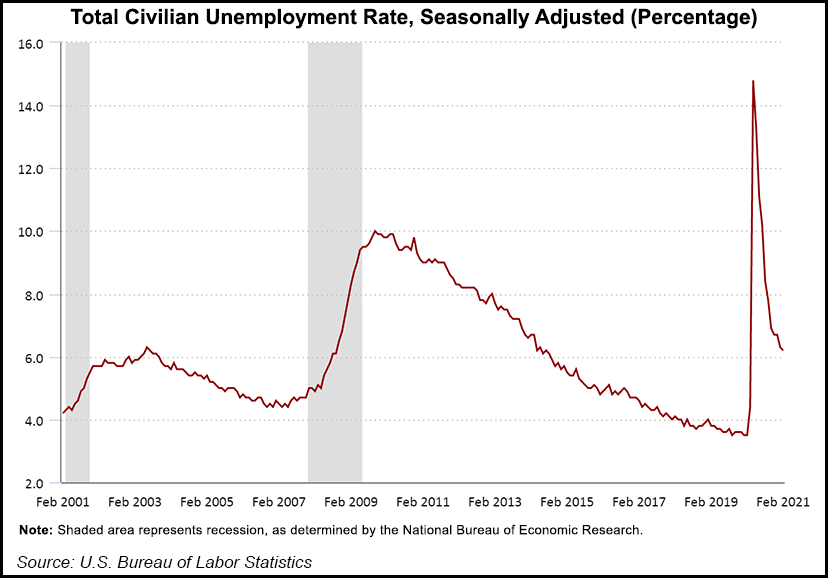 Bespoke Weather Services said that its mid-range forecast on Monday had shifted a tad cooler from a previous outlook on Friday, with the potential for colder air next week. But the current week looks to be exceptionally warm and, overall, conditions are expected to prove mild over the balance of March, minimizing heating demand.

“We still have plenty of warmth this week…including a couple of days near daily record levels in terms of national” gas-weighted degree days, Bespoke said. “This skews the 15-day period as a whole warmer than normal, despite the cooler look next week.”

Production, which had recovered from the freeze-offs caused by the Arctic blast that derailed Texas’ energy system in February, held steady on Monday near 90 Bcf.

EIA reported a withdrawal of 98 Bcf for the week ended Feb. 26. Wintry conditions persisted in the Midwest and East during the EIA covered week, fueling expectations for a triple-digit storage build in the 130s-140s Bcf.

“At the least, we know there is more in storage than was expected, but in terms of what comes next, it is not clear how much we can read into the implied supply/demand balance from the number,” Bespoke said.

“If such a balance is carried forward, we easily continue to move lower in terms of price,” the firm said. “If it turns out to be a one-off, prices can stabilize. We do see the fundamentals side as rather weak, currently, with production having returned…and power burns looking weak, not just in absolute terms, but in our weather-adjusted model.”

Meanwhile, on the macroeconomic front, the U.S. Senate over the weekend passed President Biden’s $1.9 trillion pandemic relief plan. The House could vote as early as Tuesday on the legislation, which includes money for direct payments to a majority of U.S. households, additional aid for small businesses and funding to hasten vaccine distribution efforts. Biden has said the government spending is expected to boost the economic recovery and help bring an end to virus outbreaks.

That followed news Friday that U.S. nonfarm payrolls rose by 379,000 in February. That was more than double the prior month’s gain, according to the U.S. Department of Labor.

“With the vaccine calendar shortening and more fiscal support on the way, the outlook for economic growth has improved,” said Raymond James & Associates Inc.’s Scott Brown, chief economist. “It’s likely to take some time for the labor market to sort itself out, but the outlook is positive.”

Separately, the U.S. Centers for Disease Control and Prevention said Monday that under new federal guidelines, Americans who are fully vaccinated against the virus can begin to meet in groups with other inoculated people without masks or social distancing, a public show of confidence in the effectiveness of the vaccines.

Hospitalizations tied to the coronavirus are declining as vaccines get distributed. The Covid Tracking Project said hospitalizations on Sunday were down nearly 70% from the Jan. 6 peak of 132,474.

“Most of the U.S. will be mild to warm this week with highs of 50s and 60s across the northern U.S. and 60s to lower 80s across the southern U.S.,” NatGasWeather said. “Cooler exceptions will be over New England early in the week and across the West mid-week as weather systems bring showers. Cold air arriving in the Rockies and Plains early next weekend will spread south and eastward” for bouts of stronger demand.

Heating needs could further intensify next week. “Most of the U.S. will be cool versus normal as weather systems sweep across the country with rain and snow,” the forecaster said. “Highs across the northern U.S. will be in the 20s to 50s, with lows of 10s to 30s, while the southern U.S. will be mild with highs of 50s and 60s.”

Much of the Lower 48 will warm into the 50s to 70s March 20-22 as high pressure returns, NatGasWeather said.

Cash prices Monday were down across nearly every region, led lower by falling prices in the Northeast, where Algonquin Citygate dropped $2.520 day/day to average $2.845 and PNGTS lost $1.695 to $3.870.

Additionally, Cheniere Energy Inc.’s Corpus Christi LNG on Monday started a maintenance event that limited deliveries to the LNG terminal to 2,142,000 MMBtu through Tuesday afternoon. “Nominations last Thursday were 2,448,892 MMBtu but dropped to around 1,700,000 MMBtu over the weekend” and Monday, Spangler said.

The pipeline is set to begin a separate maintenance project Tuesday that is expected to last through Friday and limit flows through the Sinton compressor station to 2,295,000 MMBtu/d, he added.