San Antonio-based Abraxas Petroleum Corp. is finalizing talks to sell its 25% working interest in the Nordheim Project in the Eagle Ford Shale to an institutional buyer for about $20 million, the company said Monday. 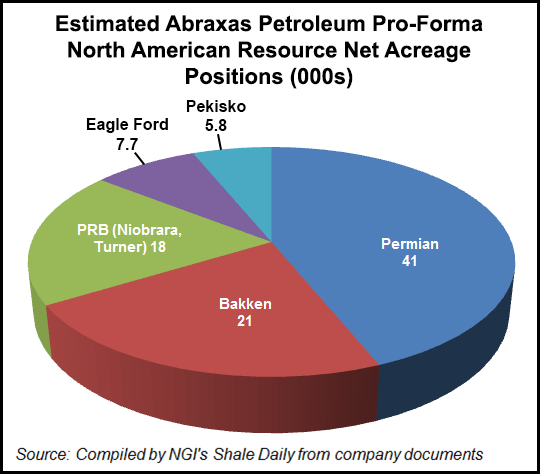 The divestiture consists of 544 net acres in DeWitt County, TX, and about 64 boe/d (56% gas; 26% natural gas liquids; 26% oil) of net production. Abraxas said it will retain the rights to its Edwards production, reserves and upside across both its Nordheim and Wagner lease blocks. Closing is expected in early December, subject to conditions and adjustments; the sale is to be effective Sept. 1, 2012.

Separately, Abraxas has also agreed to sell its Alberta Basin properties and lease its mineral acres in the area for combined proceeds of $2.85 million and an overriding royalty interest of 1.25-5% depending on lease terms. The Alberta Basin properties do not have any associated production or reserves. Closing is scheduled for late November and is subject to conditions and adjustments. The buyer was not disclosed.

“The Alberta Basin and potential Nordheim asset sales are the start of what we hope to be an active and profitable campaign of divesting noncore assets,” said Abraxas CEO Bob Watson. “We remain committed to enhancing shareholder return by de-levering the balance sheet and refocusing the portfolio on our highest returning and highest growth basins.”

At its WyCross prospect in the Eagle Ford, Abraxas recently set a company record drilling to 15,150 feet in less than eight days on the first of its 10-well program with the Cobra B1H. The well is scheduled to be completed in mid-November. Drilling has begun on the company’s second well, the Mustang 1H, and well site construction is under way for the third well, the Corvette C 1H.

In the Williston Basin, completion operations are ongoing on the Raven 2H, 3H and the Jore-Federal 3H. Abraxas’ wholly owned rig has moved to the Lillibridge block where drilling has begun on a four-well pad.

Following the Nordheim sale, Abraxas will have about 7,700 net acres in the Eagle Ford Shale. The company’s largest holdings are in the Permian (41,000 net acres) and Bakken Shale (21,000 net acres).

For the quarter ended Sept. 30, company-wide production averaged 4,177 boe/d. In the Eagle Ford, processing downtime at Regency Gas Services LP’s Tilden plant during September shut in production from the Cobra 1H for the month, Abraxas said. “The facility is now accepting volumes from the Cobra 1H and is positioned to accept additional volumes from the remainder of the company’s WyCross development,” Watson said. “Bakken completion operations remain ongoing at our first three-well pad. Our company-owned drilling rig continues to run smoothly as evidenced by the recent setting of surface casing on all four Lillibridge wells. We look forward to what promises to be a transformational quarter for Abraxas.”

Abraxas has closed on a new credit facility that provides for a $150 million borrowing base. It fully reflects the removal of reserves and production associated with the potential Nordheim divestiture. A previous covenant limiting capital expenditures to $10 million per quarter has been removed. As of Sept. 30,Abraxas had $134 million outstanding on the facility and $2.6 million in cash. The company has operations across the Rocky Mountain, Midcontinent, Permian Basin and onshore Gulf Coast regions and Alberta, Canada.

Abraxas reported a net loss for the quarter ended Sept. 30 of $18.6 million (minus 20 cents/share) compared to net income of $20.1 million (22 cents/share) for the year-ago quarter.

The adjusted net loss, which excludes certain non-cash items, was $547,000 (minus 1 cent/share), compared to adjusted net income of $3.6 million (4 cents/share) for the year-ago quarter. Adjusted figures exclude unrealized losses on derivatives and an impairment of Canadian assets.