A “very weak demand” picture quickly sapped last week’s momentum for natural gas forward prices, with November contracts plunging an average 26.0 cents for the Sept. 24-30 period, according to NGI’s Forward Look. December on average dropped half as much. 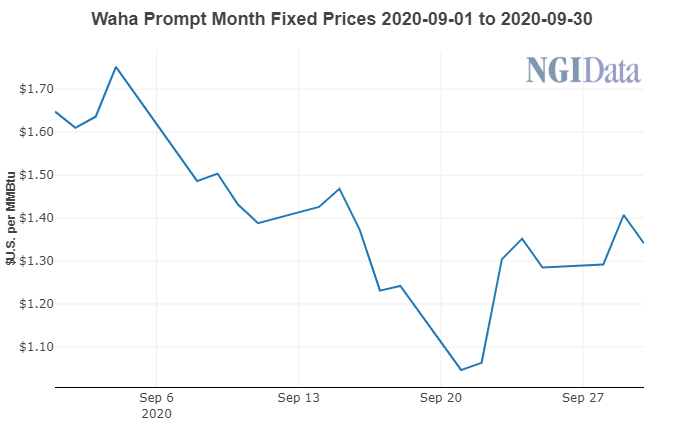 Unlike earlier in September when the 2020-2021 winter strip (November-March) remained largely immune to steep drops at the front of the curve, prices over the past week tumbled an average 13.0 cents. The summer 2021 strip (April-October) also fell, but losses were far less severe at an average 4.0 cents, and smaller declines were seen further out the curve.

With large fluctuations in liquefied natural gas (LNG) demand and moderate weather blanketing a large chunk of the Lower 48, volatility has been rampant along the Nymex futures curve and across other U.S. market hubs.

EBW Analytics Group said the October Nymex contract rolled off the board at $2.101/MMBtu after trading in a “stunning” 53-cent range in the prior two weeks. Volatility approaching this level is typically reserved for mid-winter weather forecast surprises, according to the firm.

“Although November may be more stable, heightened volatility is likely to persist and a wide range of price outcomes remain possible over the next few weeks,” EBW said.

Extremely weak spot prices have plagued the front of the curve, with Henry Hub cash prices at only $1.630 on Wednesday dragging the November Nymex contract down to a $2.527 settle. That makes near-term weather forecasts all the more important given the current storage situation.

On Thursday, the Energy Information Administration (EIA) reported a 76 Bcf injection into storage inventories for the week ending Sept. 25, lifting stocks to 3,756 Bcf. The figure was 471 Bcf above year-ago levels and 405 Bcf above the five-year average, according to EIA.

With less than 50 Bcf needed on average per week to reach 4.0 Tcf by the end of October, the latest EIA stat may seem bearish. However, the figure is reflective of some of the tightest supply/demand balances seen this summer, but not enough yet to avoid containment issues, Bespoke Weather Services said. In particular, stout storage in the South Central region stands to pressure Henry Hub pricing even further.

South Central inventories rose to 358 Bcf, including a 9 Bcf injection into salt facilities and an 11 Bcf build in nonsalts, according to EIA. Salt capacity is reported to be around 400 Bcf, with four more weeks remaining in the traditional injection season. Builds often continue into November.

Genscape continues to expect a significant ramp-up in LNG feed gas deliveries in October, with nominations to Cameron now at 0.1 Bcf/d after being at zero for most of September. It also expects the return of Cove Point, while nominations to Elba and Freeport had hit new all-time highs in the last two days.

Going forward, demand is expected to be hypersensitive to gas prices, according to Fell, “but weather is the 800-pound gorilla in the winter.”

Taking a closer look at the Nymex futures curve, Mobius Risk Group said the 59.0-cent spread between November and December futures may require a narrowing of the cash-to-prompt spread, and/or a colder forecast in the next couple of weeks for the December contract to not begin feeling the pressure of late-injection season woes. For consumers, now could be “a period of opportunity” to consider how willing they are to carry open exposure into next year. The firm noted that weather-adjusted balances are shifting quickly to a “drastically undersupplied” backdrop.

“This is not to say consumers are facing a short-lived window of opportunity,” Mobius said. Still, in the next few weeks “they should contemplate the risk/reward of being exposed to monthly or daily pricing in 2021 while the market cleans up current inventory constraint issues.”

Accurately predicting the future direction of prices and the weather are long shots. While it is possible that spot market prices would snap higher, EBW said the more likely outcome is continued near-term declines in the November contract. Weather-driven demand is at its seasonal nadir. Forecaster DTN said the back half of October calls for seasonal weather over the eastern United States and continued warmth for the western part of the country.

From a meteorological perspective, much depends on the strength of the Madden-Julian Oscillation, according to DTN. If a strong pattern emerges, it could drive cooler temperatures into the East. If not, a warmer European model may extend warm anomalies to later into the month.

There aren’t many headlines for Permian Basin prices when cash and forward prices are well above zero. Still, a dramatic cash decline that prompted a major sell-off in November forwards, along with pronounced weakness further along the curve, put the spotlight back on the West Texas play in the past few days.

With weather patterns across neighboring regions generally expected to be mild in the coming weeks and extreme summer heat in the West forecast to start fading, demand for Permian associated gas is rapidly dwindling. AccuWeather said unrelenting heat should continue for the next several days, but “much lower temperatures” along with clouds and even rain could arrive late next week.

“How much and how fast the cooler and wetter pattern evolves will depend on how much the jet stream shifts later next week,” said AccuWeather senior meteorologist Alex Sosnowski.

Meanwhile, there are signs of life emerging in drilling activity. As of Sept. 25, Baker Hughes Co. said the Permian had added two rigs for the week to stand at 125, versus 414 a year ago. Though higher production may be months away, the prospect of added supply amid the currently weak demand environment may have factored into the forward price weakness.

Other markets across the Lower 48 recorded price fluctuations that were more in line with benchmark Henry Hub.