Duke Energy plans to buy its Charlotte, NC, neighbor and Atlantic Coast Pipeline project partner Piedmont Natural Gas in a $4.9 billion cash deal that it said would give it “a growing natural gas platform.” Including debt, the value of the deal is $6.7 billion. 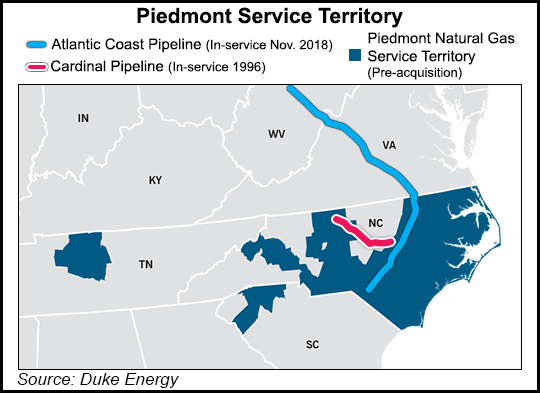 The Duke-Piedmont announcement comes two months after Southern Company announced its $12 billion transaction to acquire AGL Resources, which is also a partner in Atlantic Coast (see Daily GPI, Aug. 24). Southern also said it wants to wet its beak in the natural gas stream.

“This transaction establishes a valuable natural gas infrastructure platform, which will provide strong growth opportunities for years to come,” Duke CEO Lynn Good said during a conference call to discuss the deal. “Abundant, low-cost natural gas will become an increasingly important part of the nation’s energy mix as the shift away from coal continues. Duke Energy has been a leader in the coal-to-gas transition in the last decade, and this acquisition further solidifies our leadership for the future.”

Duke is the largest electric power holding company in the United States, with regulated utility operations serving 7.3 million customers in six states in the Southeast and Midwest. Its commercial power and international energy business segments own and operate power generation assets in North America and Latin America, including a portfolio of renewable energy assets in the United States.

The combined company would be called Duke Energy, but Piedmont would retain its name as a subsidiary. More than 90% of the combined company assets would be regulated, and it would have “major” natural gas operations, including those serving 1.5 million local distribution company customers, three times as many as a standalone Duke Energy. The combination also would have seven natural gas-oriented JV ownership interests and more than 32,000 miles of natural gas pipelines.

Duke Energy and Piedmont are key partners in the $5 billion Atlantic Coast Pipeline, which would be the first major natural gas pipeline to serve eastern North Carolina, they said. The 1.5 Bcf/d project is a JV led by Dominion (45%) and includes Duke (40%), Piedmont (10%) and AGL (5%). A 564-mile interstate pipeline, it would carry Appalachian Basin gas to power generation and other markets in Virginia and North Carolina (see Daily GPI, Sept. 18).

Duke, a major power generator, has turned its attention more to natural gas for environmental and economic reasons, with plans to replace coal-fired generation with gas (see Daily GPI, June 29,May 19).

Piedmont Natural Gas was formed in 1951 in Charlotte from assets sold by Duke. Duke was founded in the city in 1904.

Boards of both companies have approved the deal. Approvals are needed from the North Carolina Utilities Commission and Piedmont shareholders. Antitrust clearance is also necessary. Deal details will be provided to Public Service Commission of South Carolina and the Tennessee Regulatory Authority, the companies said. Closing is targeted by the end of 2016.

Piedmont shareholders would receive $60 in cash for each share of Piedmont common stock, representing a 40% premium to Piedmont’s Oct. 23 closing. Duke would also assume $1.8 billion in Piedmont debt, representing a total enterprise value of the deal of $6.7 billion.

A fully underwritten bridge facility is in place with Barclays to complete the transaction. Duke Energy would finance the transaction with a combination of debt, between $500 million and $750 million of newly issued equity and other cash sources.

Piedmont Natural Gas would retain its name, operate as a business unit of Duke Energy and maintain its presence and headquarters in southeast Charlotte.

“The strategic combination of our two companies will deliver compelling value to our shareholders, greatly expand our platform for future growth, enhance our ability to provide excellence in customer service and give our employees more opportunities in one of the largest energy companies in the United States,” said Piedmont CEO Tom Skains.