The would-be developer of a major new refinery complex in South Texas aims to come between Eagle Ford Shale crude supply and Mexico’s demand for gasoline and other fuels. The project would be the first major Texas refinery built in decades. 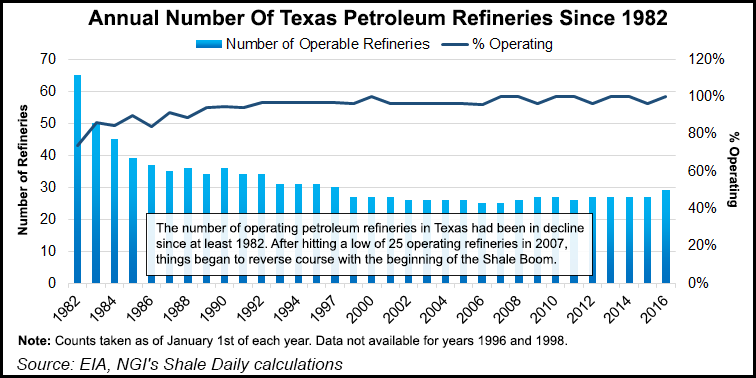 Raven Petroleum LLC, a unit of The Woodlands, TX-based Raven Resources Group LLC, was recently formed by fifth- and sixth-generation Texans to develop a refinery complex in Duval County, which is just outside of Laredo. The facility planned would have direct access to Mexico via the Kansas City Southern railroad. Additionally, there is highway transportation access readily available at the planned site, which is bisected by two pipelines as well.

Multiple suppliers would provide access to “ample feedstock” from the Eagle Ford, the company said. There are no other refineries in the Laredo area.

The $500 million facility would have the capability to handle 50,000 b/d of crude oil with storage tank capacity for up to 4 million bbl. The rail access would provide up to two inbound and two outbound unit trains per day, accessed by the facility’s planned 20 miles of internal track.

Besides gasoline, the facility could initially produce diesel, jet fuel, naphtha and liquid petroleum gas (LPG) products. The goal is to begin construction next year and begin operations by the end of 2018. Project financing has yet to be finalized.

According to Energy Information Administration (EIA) data, as of Jan. 1, there were 29 operating refineries in Texas with no facilities idled. The facilities combined offered more than 5.45 million b/d of capacity based on calendar day, according to EIA. Texas has more refineries than any other state, followed by Louisiana and California, which each have 18.

In a September 2015 note, EIA said U.S.-Mexico crude oil swaps approved in August 2015 by the U.S. Department of Commerce’s Bureau of Industry and Security would likely involve exchanges of U.S. light sweet crude for Mexican heavy sour crude that is already being exported to the United States.

According to EIA, the U.S. Gulf Coast has “significant” coking and desulfurization capacity well-suited to handle heavy sour crude. However, production from plays such as the Eagle Ford is light sweet.

“There are six major refineries in Mexico,” EIA said. “Three of them, representing 42% of total capacity, have coking units and can produce lower-sulfur gasoline. The other three refineries do not have cokers and related upgrading units. Consequently, they produce only limited amounts of lower-sulfur products and are not well-configured to process heavy sour crude oil. In 2014, the six refineries processed 1.2 million b/d of crude oil…”

In late 2014, Flint Hills Resources began construction on a project that will enable its Corpus Christi West refinery to process more domestic crude into transportation fuels. Called Project Eagle Ford, it is expected to cost around $600 million and take about 36 months to complete.

Earlier this year work was begun on Rangeland Energy’s South Texas Energy Products System. The Corpus Christi facility will receive and store refined products, LPG and other hydrocarbons for transport to terminals primarily in Mexico. During the initial phase of the project, refined products and LPG will be received at the terminal then shipped to inland terminals located in Mexico.