The U.S. State Department issued TransCanada Corp. a presidential permit for its controversial Keystone XL (KXL) oil pipeline on Friday, reversing a decision made about 500 days earlier that the $8 billion project was not in the nation’s interest. 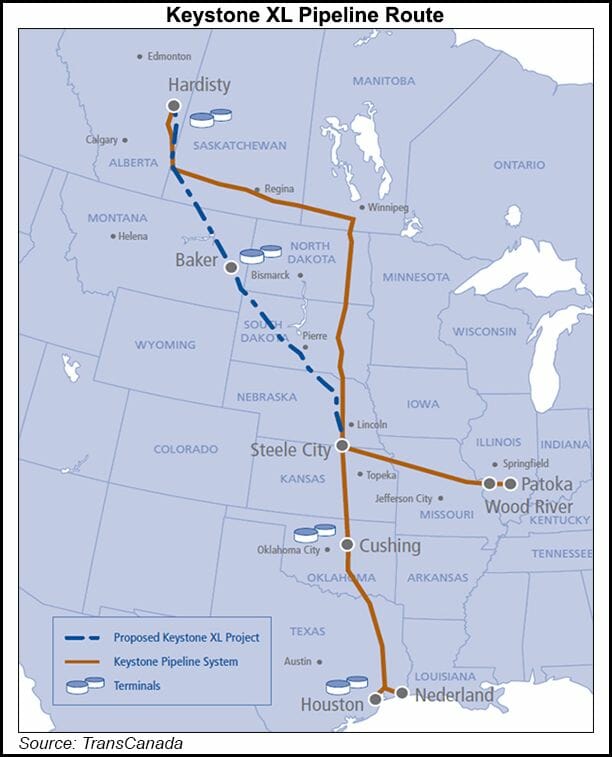 But TransCanada still has some obstacles to overcome to get the project completed. It must secure additional permits and negotiate with landowners and regulators in three states — Montana, Nebraska and South Dakota — over the pipeline’s final route.

“This is a significant milestone for the KXL project,” TransCanada CEO Russ Girling said Friday. “We greatly appreciate President Trump’s administration for reviewing and approving this important initiative, and we look forward to working with them as we continue to invest in and strengthen North America’s energy infrastructure.”

KXL — a 1,700-mile pipeline starting in Alberta that would transport 830,000 b/d, including 100,000 b/d from the Bakken Shale, to refineries on the U.S. Gulf Coast — was blocked by the State Department in November 2015, during the Obama administration, which determined that the project was not in the nation’s interest. The change in administrations changed the project’s outlook.

The southern portion of the pipeline, from Cushing, OK, to refineries on the Gulf of Mexico has already been built and is in service.

TransCanada promised to work with the three aforementioned states and said it expects to conclude an agreement with the Nebraska Public Service Commission (NPSC) this year. The company promised to drop its claim under the North American Free Trade Agreement over the Obama administration’s rejection of the pipeline, and would withdraw its lawsuit in U.S. District Court for the Southern District of Texas in Houston over the rejection. TransCanada was seeking $15 billion in damages.

State Department approval was required because the pipeline will cross the U.S.-Canada border.

The State Department said Undersecretary of State for Political Affairs Tom Shannon signed the permit. Last month, Secretary of State Rex Tillerson recused himself from deliberations over the project because he had voiced support for it during his previous tenure as CEO of ExxonMobil Corp.

Fred Jauss, a partner at law firm Dorsey & Whitney LLP and a former attorney with the Federal Energy Regulatory Commission, said that while TransCanada has cleared a big hurdle toward getting the project completed, more hurdles remain.

“The presidential permit is only one part of a web of federal, state, and local permits that must be obtained prior to starting construction,” Jauss said. “Other federal agencies, such as the U.S. Army Corps of Engineers, state regulatory commissions, and even local planning boards may have requirements that need to be fulfilled by KXL prior to construction. In addition, TransCanada may still need to reach deals with hundreds of potentially affected landowners on the pipeline’s route.

“There is a lot of work ahead for TransCanada before crude oil starts to flow from Alberta to the Gulf Coast on KXL. However, today’s grant of the presidential permit allows TransCanada to push forward in earnest towards obtaining those other permits and getting pipe in the ground.”

TransCanada filed an application for approval of the pipeline route through Nebraska with the NPSC on Feb. 16. The state regulatory agency has 210 days from the receipt of an application to enter an order either approving or denying it. A deadline for groups and individuals seeking formal intervention over the application expired on March 22.

Jack Gerard, CEO of the American Petroleum Institute, called the permit issuance “welcome news” and urged states along the pipeline route to also allow the project to move forward.

“This critical infrastructure project has been studied longer than any pipeline project in U.S. history with exhaustive reviews by the State Department concluding that the project is safe for the environment and the best option for transporting domestic crude and Canadian oil to U.S. refineries,” Gerard said. “Approval of this project is an important step to recognizing the benefits that come from U.S. energy infrastructure…

“Moving forward, we strongly urge the individual states, which stand to benefit from the KXL pipeline, to approve this important project.”

“After many years of unfortunate delays and partisan posturing, KXL pipeline finally got the green light it has long deserved,” Donohue said. “We applaud President Trump’s decision to approve the project and prove to the world that America is capable of tackling the major infrastructure improvements necessary for a modern economy.

“This pipeline, and countless other projects around the nation, will improve America’s energy security, create jobs, and help get the economy back on track.”

Thomas Pyle, president of the Institute for Energy Research, added that KXL “is an economic no-brainer and has successfully gone through all the necessary environmental reviews. The State Department clearly made the right call by reversing the Obama administration’s politically motivated decision.

“President Trump is showing that he won’t engage in the same political foot-dragging as his predecessor. This will provide much-needed certainty for businesses looking to invest in America’s energy infrastructure. While KXL still faces a few hurdles, we’re hopeful that the project will continue to move forward after years of senseless delays.”

And James Callahan, general president of the International Union of Operating Engineers, added that building KXL “makes sense for the environment and public safety.

“By reducing the amount of crude oil currently traveling through our towns and upon our waterways by train, truck and barge, pipelines minimize the potential impacts to our air and water quality.”

Conversely, environmental groups were dismayed by the permit’s issuance but promised to continue fighting the pipeline.

“The State Department just sent a signal to the rest of the world that the United States government is moving backwards when it comes to climate and energy,” said Greenpeace USA Executive Director Annie Leonard. “The Trump administration may be furiously propping up an obsolete energy system at the behest of his fossil fuel cronies, but the majority of people in this country wants action on climate change and wants support for renewable energy.”

Leonard added that the organization would urge five major banks — Bank of America, Citigroup Inc., JPMorgan Chase & Co., Toronto-Dominion Bank and Wells Fargo & Co. — to not provide financial services to TransCanada that could help it build the pipeline.

“It takes money to build a pipeline, and the opposition movement to stop fossil fuel projects like KXL will do everything it can to deprive TransCanada of any new funding for this ill-fated and unnecessary pipeline. TransCanada may have a permit, but can they find the funding?

“KXL was stopped once before, and it will be stopped again.”

On its website, the Sierra Club posted “the fight’s not over” and urged its supporters to submit public comments to the NPSC to voice their opposition.

“The decision [to issue the presidential permit] isn’t shocking,” the Sierra Club said. “It’s just another step Trump and his billionaire cabinet have taken to line the pockets of Big Oil at the expense of communities. The good news is this fight is far from over and we can win.”

Shortly after taking office, President Trump issued a presidential memorandum to advance construction of KXL and another controversial project, the Dakota Access oil pipeline. Both had been thwarted or delayed by the Obama administration.