Record natural gas production declines and a potential rebound in winter demand could create the tightest market of the past decade, with Henry Hub prices soaring to $5.00/MMBtu if weather is colder than normal, according to Morgan Stanley. 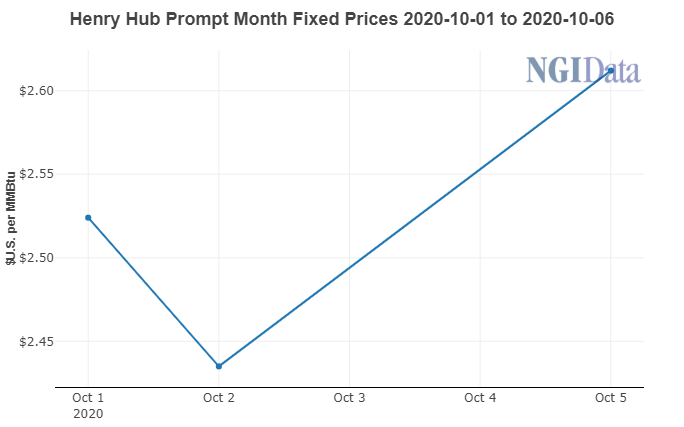 Researchers said that the precipitous drop in oil prices has stalled growth in the “free” associated gas coming from rampant oil production. That, combined with a roughly 50% reduction in spending by exploration and production companies from 2019, could result in a 3-4 Bcf/d year/year decline in associated gas output by the end of the year. With West Texas Intermediate crude currently below the $40/bbl threshold needed to hold U.S. volumes flat in 2021, declines could continue.

“Declines are not isolated to the oil basins,” said the Morgan Stanley team, led by equity analyst Devin McDermott.

In the gassy Haynesville Shale, for example, rig counts have fallen from around 50 to around 35 year to date. The biggest gas-producing region, the Marcellus Shale, has posted a similar drop of roughly 30%.

“Weak spot prices this summer, balance sheet stress and minimal access to external capital have left gas producers with production declines of their own, and limited ability to proactively increase capex in response to the upcoming market tightness,” analysts said.

The demand side of the equation is more positive. With Covid-19 bringing global economies to a near standstill, gas demand plummeted over the summer. The cancellation of domestic liquefied natural gas (LNG) cargoes reached a zenith of 45 in July, sending feed gas deliveries to U.S. terminals down below 3 Bcf/d, according to Morgan Stanley. U.S. capacity is around 9.5 Bcf/d.

Although the pandemic continues to cause uncertainty, weather-driven demand is expected to result in “negligible” cargo cancellations this winter as the global LNG market shifts into balance, according to Morgan Stanley. Analysts expect U.S. feed gas to stabilize around 9-10 Bcf/d during 4Q2020 from an average around 6 Bcf/d in September.

Other analysts and consultants, including Wood Mackenzie, have shared similar forecasts related to supply and demand this winter.

The Energy Information Administration (EIA) on Tuesday said it expects tightening balances to boost Henry Hub spot prices to a monthly average of $3.38 in January. In the Short-Term Energy Outlook, monthly average spot prices are forecast to remain higher than $3.00 throughout 2021, averaging $3.13 for the year from a forecast average of $2.07 in 2020.

Energy Aspects analysts, meanwhile, said when not undergoing maintenance or under storm-related shutdowns, U.S. gas export facilities have routinely run at high utilization rates. Tropical Storm Beta created a backlog of boats outside Freeport, TX, according to the firm, resulting in a feed gas delivery record of 1.9 Bcf/d on Sept. 29. The intake at the Sabine Pass export project in Louisianaalso neared its maximum capacity of 4.0 Bcf/d in the days after Beta.

“High run rates reflect LNG offtakers’ response to widening global arbitrage, helped by the recent drop in Henry Hub pricing,” Energy Aspects said. Demand for U.S. LNG is forecast to be “durable” through the winter and into next summer, with exports reaching 10.3 Bcf/d, or 95% utilization, from December to February.

Energy Aspects’ supply/demand balances estimated that 95% utilization rates would continue into the 2021 injection season, including volumes from third production unit at Cheniere Energy Inc.’s Corpus Christi facility, which is projected to begin operations in March.

Morgan Stanley is projecting stocks to exit the traditional injection season at the end of October at around 3.9 Tcf, which is roughly in line with the five-year average. The analyst team is forecasting the combination of constrained supply and increasing demand possibly leading to one of the largest winter draws over the past decade.

“Assuming normal 10-year weather, we expect tight end-March inventories of around 1.2 Tcf, which is roughly 35% below the five-year normal of about 1.8 Tcf, with a mounting deficit thereafter,” said the analysts. Colder-than-normal weather could result in the lowest U.S. gas inventory levels on record, “and a material price rally to $5/MMBtu, or higher, and average in the mid-$4 range for full year 2021.”